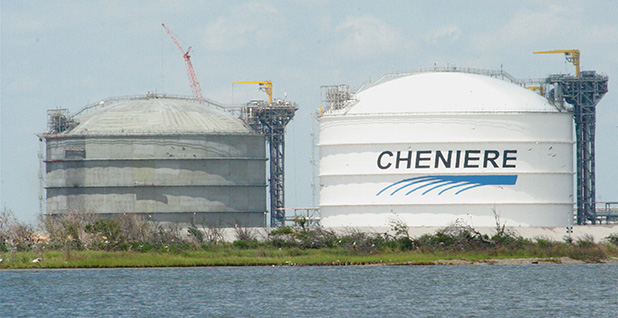 Federal regulators have ordered Cheniere Energy Inc. to shut down part of its liquefied natural gas export terminal in Louisiana after multiple leaks from storage tanks were discovered in late January.

The Pipeline and Hazardous Materials Safety Administration (PHMSA) announced Friday that it had ordered Cheniere to shut down two tanks at its Sabine Pass facility, which in 2016 was the first of several U.S. LNG export projects under development to start shipping gas.

PHMSA allowed the company to continue importing and exporting gas and use three other LNG storage tanks at the site.

PHMSA is investigating a Jan. 22 incident in which workers discovered that LNG had been leaking into a containment ditch around a storage tank. Further inspection revealed that natural gas vapors were leaking from 14 points around the base of a second LNG storage tank.

Cheniere "cannot validate the exact source or amount" of leaked LNG and "cannot identify the circumstances that allowed the LNG to escape containment in the first place," PHMSA Associate Administrator Alan Mayberry wrote in a corrective action order that called on Cheniere to complete a thorough assessment of the problems before it seeks permission to resume use of the two storage tanks.

The order is the first public notice of the incident and was issued more than two weeks after it took place.

"To date, Sabine has been unable to correct the long-standing safety concerns," Mayberry wrote, noting that "unintentional release of LNG can result in a serious hazard to people and property."

Natural gas is highly flammable and under certain conditions explosive. PHMSA describes LNG spills as "low-frequency, high-consequence events." The Jan. 22 incident did not result in any reported injuries, fires or explosions.

The two tanks had been kept nearly empty in a supercooled state since the incident, but federal regulators have said they must be fully emptied while PHMSA’s Office of Pipeline Safety investigates.

PHMSA’s order and information shared by Cheniere spokesman Eben Burnham-Snyder show that Sabine Pass personnel had been grappling with a series of storage tank issues dating back to 2008.

According to PHMSA’s order, the latest incident was discovered by Sabine Pass personnel when LNG pooled outside one of the facility’s storage tanks.

LNG is natural gas that is cooled to a liquid at minus 260 degrees Fahrenheit. Its volume is then reduced six-hundredfold. When supercooled LNG encounters ambient air temperatures, it quickly expands and turns back into a gas.

Burnham-Snyder said the leaked LNG was discovered visually and by gas detection alarms at 9:30 p.m. that Monday. Emergency procedures were launched to account for the 107 personnel on site. "The tank was taken offline within minutes and the LNG release quickly subsided, as there was no breach of or leak from the inner tank containing LNG," Burnham-Snyder said.

Once the immediate situation was under control, PHMSA said, investigators discovered four cracks ranging from 1 to 6 feet in length in the outer shell of the double-walled storage tank, along with evidence that LNG had spilled into a space between the tank’s two walls.

"Brittle failures do not leak before failing, so there is no warning before failure," PHMSA added.

Upon inspection, PHMSA found that a second storage tank at the site was "actively leaking natural gas vapors at 14 sites along the base of the tank."

Burnham-Snyder described the gas leaks at the second tank as minor. "Other tanks were evaluated and a minor vapor leak was detected on [one tank]; the use of special detection equipment that measures in parts per million was needed to detect the leak, indicating its very small size. There is no breach of, or leak from, the inner tank containing LNG," he said.

The two leaking tanks were both built by Matrix. The third such tank was not found to have any leaks of gas or LNG and remains in full service.

In a footnote, PHMSA said the third tank built by Matrix has also experienced releases of LNG from the inner tank into the space between the two walls, but is not included by the agency as one of the affected tanks for the purpose of the corrective action order.

Each of the tanks can store up to 3.4 billion cubic feet of natural gas.

Burnham-Snyder said Cheniere has submitted an "excess emissions notification" to the Louisiana Department of Environmental Quality. The liquid release is currently estimated at just under 39 cubic meters of natural gas, he said, while the vapor release estimate is not yet complete.

"Based on current information, Cheniere believes the excess emissions did not have an adverse impact on the environment," he added.

Problems with LNG spilling from storage tanks into the space between the tank walls had been on Cheniere’s radar for some time, although they were not publicly reported.

In its order, PHMSA notes that upon launch of the investigation, it obtained a copy of a study conducted by Matrix for Sabine Pass that was received by the company in March 2017. The report identified 11 "upsets" from 2008 to 2016 in the tank that recently cracked, when it was believed that LNG may have splashed from the inner tank into the gap in what was described as a "geyser-type effect."

Asked about those incidents, Burnham-Snyder said there were four times in 2016 when low temperatures were detected and a possible problem was identified with one of two pipes used to fill the tank, which was then shut down.

"While our event investigation continues, and a root cause analysis has not yet been completed, Cheniere’s initial belief is that during freezing weather the bottom fill valve failed to remain closed, resulting in [LNG] flow through the bottom fill line," he said. That resulted in the geyser-type effect seen previously, he said.

"There was and has been no breach of the inner tanks during the life of the tanks," he added, and "no loss of LNG occurred from the inner tank designed to hold the LNG, nor has that ever occurred in Cheniere’s storage tanks."

At the time of PHMSA’s order, the two leaking tanks held minimal amounts of LNG and were being kept cold, but under PHMSA’s order, Cheniere must present a plan within seven days for them to be fully emptied for further assessment.

Burnham-Snyder said import-export operations have not been affected by the closure of the storage tanks because Sabine Pass has excess storage capacity. "Cheniere’s production of LNG will continue safely, using its additional three storage tanks as needed, where no issues have been detected," he said. "Any findings from Tank 3 will be evaluated for applicability to other storage systems."

The leak is being investigated by PHMSA’s Accident Investigation Division, part of the Office of Pipeline Safety. The agency launched the Oklahoma City-based investigation unit in April 2017 to consolidate and standardize investigative functions.

Cheniere will need permission from FERC before putting the two tanks back into service.

Referencing the safety of the 500 workers at Sabine Pass and the potential for disrupting highways and waterways, PHMSA’s order requires Cheniere to conduct a root cause analysis of the tank problems, assess whether the problems apply to the company’s other tanks, and develop plans for their repair or modification, among other studies.

PHMSA is also requiring Cheniere to turn over records of any other leaks or events in which the tank systems were operated "outside design specifications."

The incident will also draw close scrutiny of LNG industry critics like environmentalists and some outside safety groups.

That closer look may include review of whether Cheniere adequately reported the 11 previous "upset" events to federal authorities. Sabine Pass’ operating license requires the plant to file twice-yearly reports with FERC "to identify changes in facility design and operating conditions, abnormal operating experiences," plant modifications and abnormalities including "geysering."

Richard Kuprewicz, a pipeline safety advocate who has worked with environmental groups and other industry critics, pointed to possible implications for other facilities that store LNG.

"Hopefully, PHMSA and FERC are doing a complete review of all LNG facilities, operational and planned, to see who else is using a similar fill and tank system to make sure this cannot happen elsewhere because the potential here for a massive tragedy is real," he said.

The Sierra Club linked the LNG release to concerns that the group has about natural gas production and export overall. "This incident is a reminder that the expansion of LNG projects poses a grave threat to our communities and our climate," Sierra Club staff attorney Nathan Matthews said.

"It’s a relief that no one was hurt, but allowing the facility to continue to operate until it’s clear how widespread these issues are would be extremely reckless," he added.