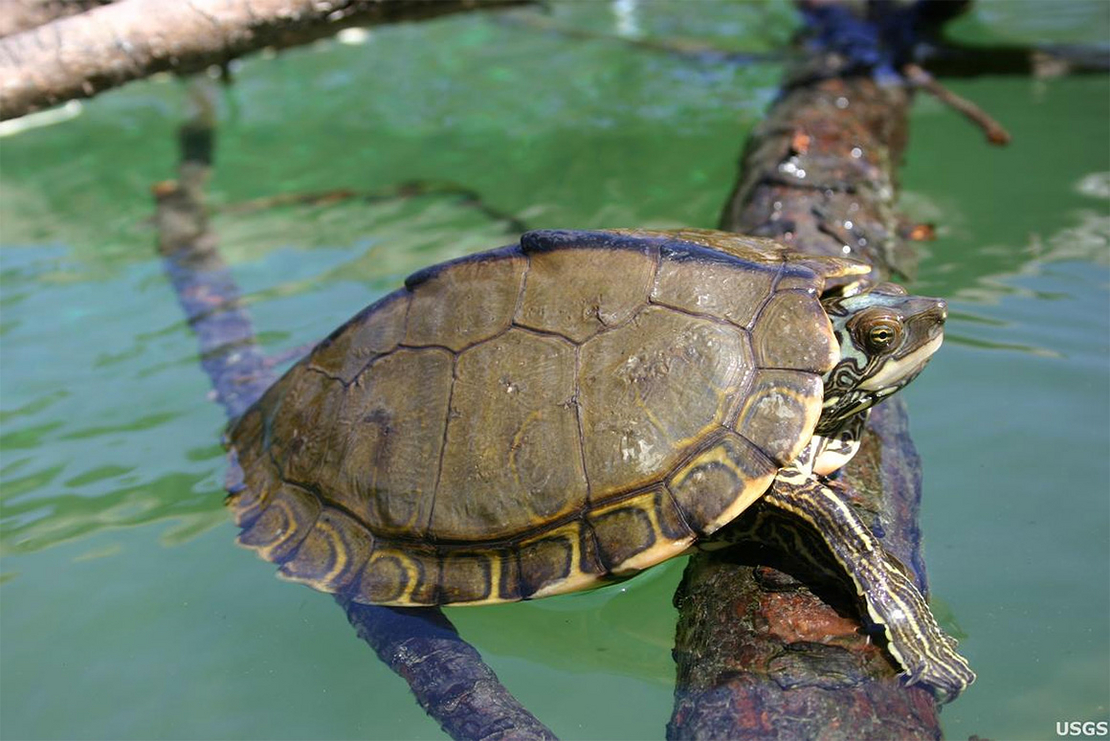 The Pearl River map turtle can be found in the Pearl River of Louisiana and Mississippi. Cris Hagen/University of Georgia/Savannah River Ecology Laboratory

Pressed by environmentalists, the Fish and Wildlife Service today proposed protecting the Pearl River map turtle and four other map turtles found in Southern states as threatened under the Endangered Species Act.

The Pearl River turtle, which is found in Mississippi and Louisiana, is also vulnerable because of the Ross Barnett Reservoir north of Jackson, Miss., with a proposed project near the existing reservoir potentially aggravating the harm, according to FWS.

“If this impoundment project moves forward, the species’ viability will continue to decline in the foreseeable future as resiliency declines through loss of suitable habitat and further isolation of turtles above the reservoirs,” the Fish and Wildlife Service said today.

Map turtles are also desired by collectors for their intricate shell, and FWS noted that “despite the less distinctive shell patterns and markings of adult Pearl River map
turtles,” the species remains a target for some herptile enthusiasts and collectors.

“The demand for turtles globally is increasing, which results in more intense pressures on wild populations,” the agency said, and “the threat of illegal collection is expected to continue into the foreseeable future.”

Besides the Pearl River map turtle, FWS said that the listing of the four other species due to “similarity of appearance” will help law enforcement anti-poaching efforts.

“We do not consider the Alabama map turtle, Barbour’s map turtle, Escambia map turtle, or Pascagoula map turtle to be biologically threatened or endangered but we have determined that listing [them] as threatened species …minimizes misidentification and enforcement-related issues,” the agency said.

Last year, the Center for Biological Diversity and Healthy Gulf sued the Fish and Wildlife Service for failing to take action on their 2010 petition to list the Pascagoula and Pearl River map turtles under the ESA (Greenwire, Jan. 21, 2020).

"These turtles are in steep decline and face major threats," Jason Totoiu, a center attorney, said at the time, adding that “the two species are unique … but they’re being driven to oblivion by trapping, pollution and reckless development, including yet another unnecessary dam proposed on the Pearl River.”

The groups sued in the U.S. District Court for the District of Columbia asking the court to compel FWS to make a final determination on the turtles.

According to the lawsuit, plans for a dam in Hinds and Rankin counties in south-central Mississippi could wipe out the Pearl River map turtle by turning the rivers where it lives into a lake.

The government subsequently agreed to finally decide whether protection is needed for the related freshwater species.

Pascagoula and Pearl River map turtles are among 13 species of map turtles, so-called for their shell markings that look like maps. Also called sawbacks, these two species look so similar that until 2010 they were deemed to be a single species.