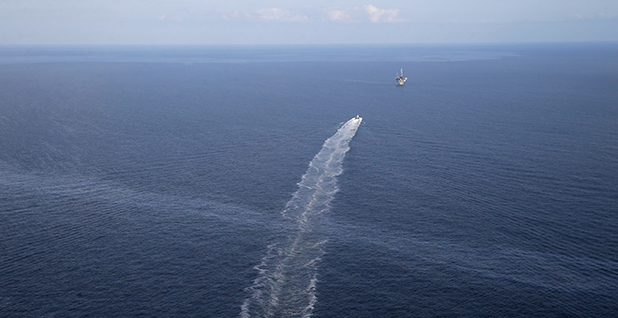 The wake of a supply vessel heading toward a working platform, crossing over an oil sheen drifting from the site of the former Taylor Energy Co. LLC oil rig in the Gulf of Mexico off the coast of Louisiana in 2015. Gerald Herbert/Associated Press

A record 14-year-old oil leak off the coast of Louisiana is not releasing as much crude into the Gulf of Mexico as recent estimates suggest, but it’s still spewing between 100 and 900 times more than claimed by the company involved in the incident, a study from NOAA and the Department of Commerce found yesterday.

Taylor Energy Co. LLC’s oil platform, Saratoga A, fell during Hurricane Ivan in 2004. Extreme waves caused a subsurface mudslide at Mississippi Canyon 20 in the Gulf where the platform sat in more than 400 feet of water.

The structure toppled and dragged to the south, snapping and then burying in sediment the cluster of 28 pipes drilled to carry oil to the surface. The company became the responsible party for cleanup, decommissioning and monitoring, a role it held for nearly 15 years.

Oil and gas plumes have been leaking to the ocean’s surface from the site ever since, and according to the recent report from NOAA’s National Centers for Coastal Ocean Science, oil is flowing at a rate of between 378 to 4,536 gallons per day. The event is the longest continuous oil spill in U.S. history, according to one of the report authors.

Earlier this year, some estimated the spill was releasing between 2,100 and 71,400 gallons of oil per day. At the worst end of that spectrum, the Taylor spill would have had a greater overall impact than the infamous Deepwater Horizon spill of 2010.

Taylor has estimated as little as 3 to 5 gallons per day.

Oil and gas plumes rising from the ocean floor and creating visible bubbles and slicks have been used to estimate the ongoing release at MC20 until now, the report states, but data collection for the study, including bubble measurements; sampling of oil, gas and water; and acoustical monitoring aimed to provide a more concrete understanding of the leak.

The study disputes Taylor Energy’s estimates of daily impact and the company’s determination that much of the release is from "oil-soaked sediment" on the ocean floor.

"The results of this study contradict these conclusions by [Taylor Energy]," the report states. Three researchers completed the study, two from NOAA and Ian MacDonald, a professor from Florida State University who was previously an expert witness on the Taylor spill for an environmental group.

"For the better part of 15 years, the responsible party maintained that the amount of oil was only 10 gallons a day," MacDonald said of Taylor.

The report "puts to bed in a very definitive way" those estimates, he said.

In a statement yesterday, the company said the federal government released the report to the media but did not share "any verifiable scientific information or data," despite the company’s requests.

"Taylor Energy remains committed to its role as the Responsible Party and continues to advocate for a response that is grounded in science and prioritizes the well-being of the environment," the company said.

‘Worst fears are being realized’

As an oil and gas driller, Taylor no longer exists.

The firm sold its oil and gas assets in 2008, forming a more than $600 million trust to pay for plugging and decommissioning. It only exists today as the entity responsible for the 2004 incident’s ongoing remediation and oversight, according to the company’s website.

For more than a decade, Taylor has been the chief reporter on plumes tied to the MC20 site, but in late 2018, the Coast Guard demanded that Taylor put in additional containment to end the surface sheen, with a $40,000-a-day fine for noncompliance.

Taylor balked at the Coast Guard’s plans for what it argued was a $1 billion mistake on the ocean floor, according to court documents.

With Taylor at odds with its demands and academia undermining the company’s findings, the Coast Guard took the unprecedented move of taking over cleanup.

Taylor sued the Coast Guard as well as the Couvillion Group, the contractor hired by the Coast Guard to put in the additional containment device. Taylor has also sued the Interior Department for not returning $432 million the company deems it is owed for completing remediation obligations, it says.

"Taylor Energy had warned the Coast Guard of the risk of reckless and irresponsible disturbance of the hydrocarbons trapped in the sediment on the seafloor following the collapse of the MC-20 platform," the company said. "Now the company’s worst fears are being realized."

The Coast Guard has noted the success of the containment system, which according to NOAA is collecting more than 1,200 gallons of oil per day.

The report is confirmation for groups that have long questioned the oil company’s reporting, said Dustin Renaud, communications director for Healthy Gulf.

"This is the first time in 14 years we’ve taken an independent look at the spill and not relied on company-provided data," he said, adding that the scientific review doesn’t end with the estimation of the daily spill rate.

There needs to be an official assessment of the impacts likely caused by the spill and what to do about them, he said.

MacDonald, one of the editors of the study, also noted that the current solution — the recently added containment device on the seabed — is temporary. Oil will continue to flow until the wells are plugged and abandoned, the expert noted.