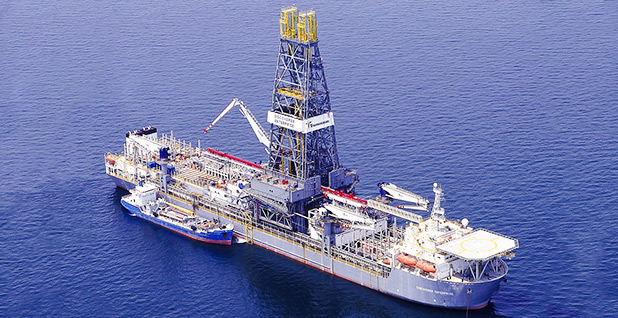 The Interior Department moved yesterday to open up most of the outer continental shelf for leasing. Bureau of Ocean Energy Management/Flickr

The Interior Department yesterday laid out its five-year program to open up vast new areas to offshore leasing, opening up the possibility of drilling in nearly all federal waters in the continental United States.

But it will take the offshore industry much longer than that to return to its pre-oil-bust glory, analysts say. And revival will depend heavily on factors — such as the price of a barrel of crude — that sit squarely outside of the federal government’s control.

"We’ve reached the bottom in both activity and the cost environment," said William Turner, senior research analyst at Wood Mackenzie. "The operators are nearing peak efficiency in offshore operations. If we can get some stability in commodity prices, 2018 is going to be putting things in place to make for an exciting 2019."

Interior’s draft program proposes to open more than 90 percent of the outer continental shelf to leasing between 2019 and 2024 (Greenwire, Jan. 4).

During as many as 47 lease sales over those five years, drillers would have the opportunity to buy up tracts and plot out their development plans. Presumably, those leases would expire after 10 years, Turner said, giving operators a decade to extract the underwater resource.

On a call with reporters yesterday, Interior Secretary Ryan Zinke touted the program as a step toward recapturing some of the offshore wealth generated in 2008, a banner year for the business (Climatewire, June 26, 2017).

Offshore revenues stood at $2.6 billion in 2016 after oil prices bottomed out.

"We can do better," Zinke said.

The secretary reiterated how expanded onshore and offshore drilling will see the United States achieving "energy dominance" as domestic oil and gas production rises and imports fall. Government energy researchers believe it is possible for the country to become a net exporter of energy within a decade. The nation almost certainly closed 2017 as a net natural gas exporter.

Not everyone is convinced that expanded offshore drilling will be the boon the administration claims it will.

"We’ve been hearing that same mantra since Jimmy Carter, I believe," Krane said. "None of our prior attempts to achieve energy independence — and what they really mean is oil independence — have ever come to fruition."

He agrees that greater domestic oil production has significantly improved U.S. energy security. With imports falling and a more diverse oil supply picture, it becomes more difficult for any single disruption or event happening in any one country to dramatically affect oil prices.

Nevertheless, the United States does not control the price of oil, Krane recalled, and the Middle East remains a dominant supplier of the fastest growing part of the world, necessitating U.S. engagement and security assurances for Middle Eastern crude suppliers for some time to come, he and Baker Institute scholar Kenneth Medlock argue in a new co-authored paper posted yesterday in the journal Energy Policy.

"The main sticking point, especially now, is that the oil market is global, and price formation does not happen inside the United States," Krane added. "Prices are formed globally and the Middle East has a lot to do with that because so much supply comes from the Middle East. So even if we don’t import a drop of oil from the Middle East, we are still dependent on them."

State of the industry

Even if most or all of the Trump administration’s proposed leasing area gets included in the final plan, it is not guaranteed that any actual offshore drilling would occur everywhere under a revised five-year schedule.

In a notice, Nikki Martin, president of the International Association of Geophysical Contractors (IAGC), pointed out that far too little is known about the oil and gas potential of many of the areas in which the Bureau of Ocean Energy Management envisions offering lease sales. Barely any new seismic surveying has occurred off the West Coast, none using more modern technologies, while the Obama administration earlier put a halt to seismic surveys in the Atlantic Basin. President Trump swiftly moved to reauthorize those Atlantic surveys last year.

IAGC complains that it can still take years for seismic survey companies to receive permission to prospect in federal waters. A recent review by the Government Accountability Office found inconsistencies with the way NOAA Fisheries and the Fish and Wildlife Service handle requests for incidental take permits in cases where seismic surveys could harm or kill marine life.

"While the Marine Mammal Protection Act requires the agencies to make decisions on IHA applications within 120 days, IAGC members’ applications for seismic surveys in the Atlantic [outer continental shelf] have been pending for 892 days," Martin said. "This unwarranted and continued stalling represents a complete bureaucratic breakdown in an otherwise straightforward process by federal agencies."

GAO recommends the federal agencies develop guidance for their staff directing how reviews are to be conducted and how long they should take. That agency said NOAA Fisheries and FWS mostly agree with these recommendations.

With or without streamlined permitting and slashed red tape, economics will play a much greater role in determining where offshore drilling occurs in the United States.

Offshore drilling activity in the Gulf of Mexico, the world’s busiest offshore energy hub, has collapsed by approximately 70 percent since the global crude oil price crashed beginning in mid-2014. Though oil prices have recovered to around $60 a barrel, Gulf drillers have not responded by dispatching more rigs to the waters off Texas, Louisiana, Mississippi, and Alabama. Baker Hughes, a General Electric company, reported last week that one offshore drilling rig left the Gulf of Mexico, dragging that region’s rig tally lower to 18 units.

The United States is also competing with far more offshore energy hubs than it had in the past as other governments have moved aggressively to entice rigs to their waters. With the rising oil price, data show that offshore oil and gas exploration has modestly expanded overseas while remaining stagnant in the U.S. Gulf of Mexico (Energywire, Nov. 13, 2017).

Aside from that shallow water mega-find "much of the discovered volumes in 2017 have come from just a handful of high-impact wells," Collard noted. "Some of the largest include: Kosmos’ giant Yakaar gas discovery in the MSGBC Basin offshore Senegal; a trio of oil discoveries in the offshore Guyana for Exxon at Payara, Snoek and Turbot; and Talos Energy’s Zama-1 discovery in the Salina Basin offshore Mexico." The largest discovery in the United States occurred onshore Alaska, the assessment found.

Oil companies are still bidding on U.S. offshore exploration blocks, but offshore lease sales conducted for the current five-year schedule have seen much less industry participation than compared to the era of $100 crude oil. The most recent lease sale showed some turnaround and rising participation. BOEM hosts the next offshore bid lease round in March.

"Leasing today is just the foundation stone upon which future production can be built," she said.

Despite the collapse of drilling activity in the Gulf, the active exploration and development off the U.S. coast before oil prices fell is leading to a surge in crude production from offshore projects. The Energy Information Administration and private-sector analysts largely agree that the U.S. Gulf will reach a new record peak daily oil production volume in 2018, exceeding the prior high-water mark by some 10 percent. Gulf oil production is then expected to plateau for a few years before declining again.

"It is time for a truly national discussion about increasing our offshore energy capabilities," National Ocean Industries Association President Randall Luthi said in a statement yesterday. "To kick off a national discussion, you need a national plan — something that has been lacking the past several years."

"This new offshore leasing plan is an important step toward harnessing our nation’s energy potential for the benefit of American energy consumers," said API Upstream Director Erik Milito. "The ability to safely and responsibly access and explore our resources in the Arctic, Atlantic, Pacific and the Eastern Gulf of Mexico is a critical part of advancing the long-term energy security of the U.S. It will also encourage economic growth, spur manufacturing and investment, create thousands of additional U.S. jobs, and strengthen our national security."

"The offshore industry has a $44 billion economic impact on the state of Louisiana," Chris John, president of the Louisiana Mid-Continent Oil and Gas Association, said in a statement. "Combining the offshore sector with related pipeline and refining activities, the oil and gas industry has a $70 billion total annual impact to Louisiana."

Reactions to the proposal from environmentalists and opponents of offshore drilling range from disgusted to horrified. Activists are livid, and major protests against the proposal are virtually guaranteed.

"The Trump administration’s plan to increase offshore drilling will cause more oil spills and deadly accidents — period," said Christy Goldfuss, vice president for Energy and Environment Policy at the Center for American Progress. "Eliminating basic drilling safety rules while pushing drill rigs into dangerous environments is arrogant, foolhardy, and will result in oil washing ashore from South Carolina and Florida to California and the Arctic."

Zinke is likely to field blowback on the plan from Florida’s Republican governor. The secretary said he has a strong relationship with Gov. Rick Scott (R) and looks forward to their "dialogue" on the matter.

But environmental groups were hesitant to trust a department chief who has made clear that "energy dominance" is his priority.

"Trump and Zinke are acting against the wishes of the American people in their attempt to expand offshore drilling and roll back permanent protections for America’s public waters," said Sierra Club Executive Director Michael Brune.

He hinted that a courtroom battle could be on the horizon.

"The Sierra Club will continue to stand with coastal communities in fighting back against this reckless plan, and we are currently examining our legal options to do so," Brune said.