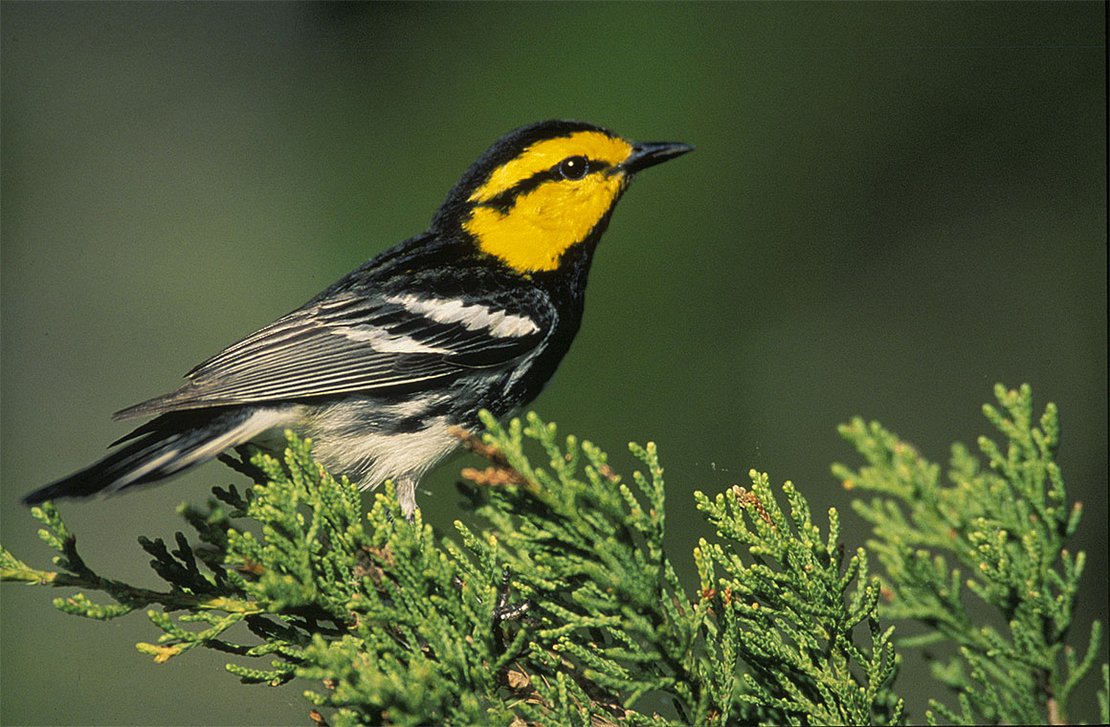 A singing Golden-cheeked warbler, which migrates between South and Central America and Texas. Steve Maslowski/U. S. Fish and Wildlife Service

The Fish and Wildlife Service said today it has again rejected a high-profile petition by Texas conservatives to remove Endangered Species Act protections from the golden-cheeked warbler.

Ordered by a federal appellate court to take a second look at the delisting petition, FWS said it reached the same dire conclusion about the small, migratory songbird.

“We find that the petition does not present substantial scientific or commercial information indicating the [delisting] may be warranted for the golden-cheeked warbler,” FWS said.

As a result of the finding, the agency added that it will conduct a more extensive “status review” of the species.

The golden-cheeked warbler was added to the ESA list of endangered species in 1990.

A 2014 status review concluded that the bird "is threatened by ongoing and imminent habitat loss" and noted that "there had been an estimated 29% loss of existing breeding season habitat between 1999-2001 and 2010-2011."

In the past, juniper clearing to create pastures for cattle grazing, as well as to produce fence posts, furniture and oil, destroyed habitat. More recent habitat loss in Travis, Williamson and Bexar counties is due to rapid suburban development.

“The human population is projected to continue to increase throughout the [bird’s] range,” the status review noted. “This growth will continue to bring additional residential and commercial development, which will further reduce and fragment … breeding habitat.”

In 2015, Texans for Positive Economic Policy, the Texas Public Policy Foundation and the Reason Foundation filed a delisting petition. The petitioners also included Susan Combs, identified as a "fourth-generation Texan with a ranch in Brewster County" who had served as a state representative, agriculture commissioner and state comptroller.

Combs subsequently served in the Trump administration as the Interior Department’s assistant secretary for policy, management and budget and also did a stint as acting assistant Interior secretary for fish and wildlife and parks.

The 2015 petition disputed the findings from FWS about the warbler, saying that "multiple surveys and research have established that the warbler breeding habitat is five times larger … and that the warbler population is an order of magnitude greater" than the agency had originally estimated.

Last year, the 5th U.S. Circuit Court of Appeals reversed a trial judge and ordered FWS to reconsider its prior rejection of the 2015 petition to delist the bird(Greenwire, Jan. 16, 2020).

Judge Carolyn Dineen King wrote that "a careful examination" showed the agency applied an "inappropriately heightened" standard requiring the delisting petition to contain information that officials had not considered and that might refute the conclusions of a prior species status review.

King was appointed to the appeals court by President Carter. Judges James Dennis, a Clinton appointee, and Edith Jones, a Reagan appointee, joined in the unanimous panel decision.

FWS also said today that Alexander Archipelago wolves in southeastern Alaska may warrant protection under the ESA and started a yearlong status review. The decision comes in response to a July 2020 petition from the Center for Biological Diversity, Alaska Rainforest Defenders and Defenders of Wildlife. In addition, FWS in response to a 2020 petition from the Xerces Society for Invertebrate Conservation said it would review the western ridged mussel.