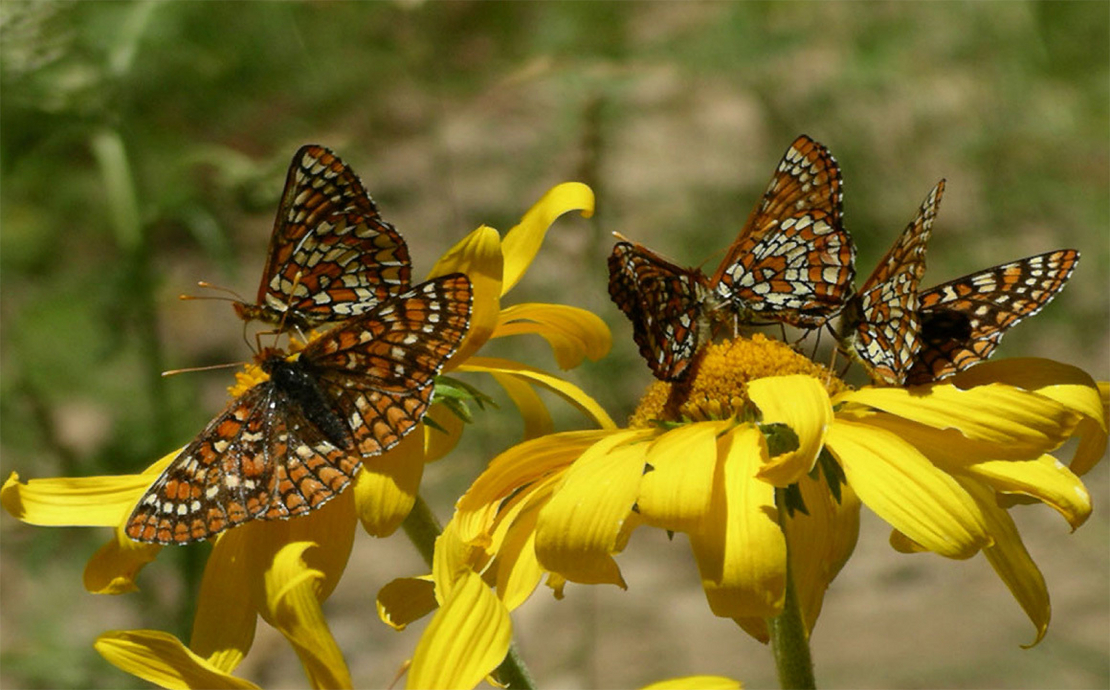 An endangered species dispute that goes back more than two decades took a fresh turn today as the Fish and Wildlife Service proposed federal protections for the Sacramento Mountains checkerspot butterfly in New Mexico.

The proposal to list the small butterfly as endangered reverses 2004 and 2009 determinations that Endangered Species Act protections were not warranted (, Dec. 22, 2004).
“Since we published the not-warranted rule in 2009, drought from climate change has worsened in New Mexico, worsening habitat conditions for the Sacramento Mountains checkerspot butterfly,” FWS said today.

The agency noted that “during abnormally dry conditions, both feral horses and elk switch to browsing certain plants that are important for the butterfly” and that recreation on the Lincoln National Forest has also increased in recent years.

Citing “heightened concern about the impact of these stressors on the habitat,” the agency had initiated a discretionary status review of the species in January 2021. In March 2021, the Center for Biological Diversity filed a petition to list the butterfly as endangered with critical habitat.

While now agreeing that ESA listing is warranted, FWS is not yet proposing to designate critical habitat.

“Careful assessments of the economic and environmental impacts that may occur due to a critical habitat designation are not yet complete, and we are in the process of working with the States and other partners in acquiring the complex information needed to perform those assessments,” the agency explained.

The butterfly is a subspecies of the Anicia checkerspot and lives in the Sacramento Mountains in south-central New Mexico. It has a wingspan of approximately 2 inches and a checkered pattern with dark brown, red, orange, cream and black spots.

It relies on a perennial plant called the New Mexico beardtongue and, for nectar, on a plant memorably called the orange sneezeweed.

FWS explained that “feral horses were inadvertently released onto the Lincoln National Forest around 2012” and that roughly 60,000 horses now live throughout the Sacramento Mountains.

New Mexico beardtongue is usually not a main food source for horses. But as drought dries up other food plants, the horses switch diets and start going after the plants that the butterfly needs.

FWS further noted that the 2020 monsoon season was an exceptionally weak one, with far less precipitation falling than in an average summer. That has meant weak growth of New Mexico beardtongue.

The organization that was then called the Southwest Center for Biological Diversity filed a petition in 1999 requesting emergency listing of the Sacramento Mountains checkerspot butterfly as endangered.

In 2001, FWS proposed listing the species, but then a few years later reversed its position.

“On December 21, 2004, we published a withdrawal of the proposed rule, concluding that the threats to the species were not as great as we had perceived when we proposed it for listing,” the agency recounted today.

In 2007, the Center for Biological Diversity and the group now called WildEarth Guardians filed another petition, citing threats including feral horse grazing, climate change and an imminent plan to spray for insect pests.

In September 2009, FWS determined listing was not warranted.