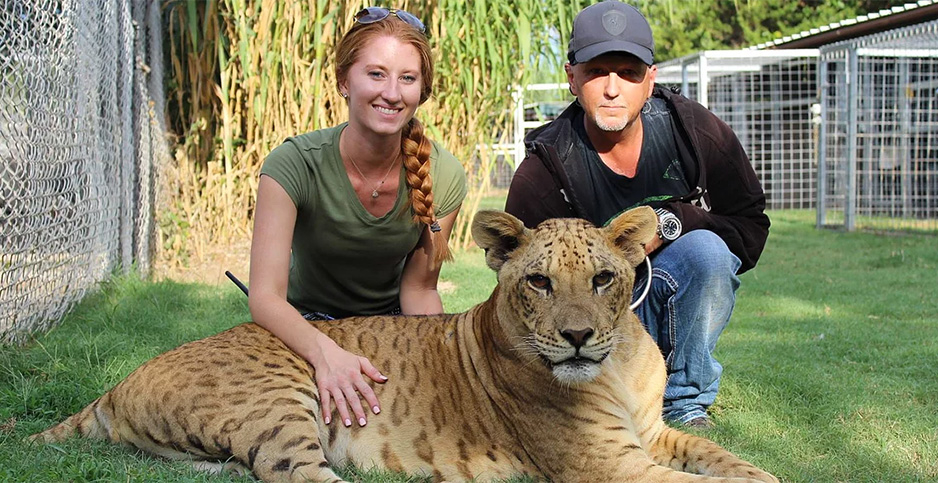 The Department of Justice filed a civil complaint against Jeffrey and Lauren Lowe of "Tiger King" fame regarding alleged mistreatment of animals covered by the Endangered Species Act. Greater Wynnewood Exotic Animal Park

The vagaries of Tiger King fame continue to spread, as the Justice Department yesterday filed a wide-ranging civil lawsuit against the husband and wife owners of the now-closed Greater Wynnewood Exotic Animal Park in Oklahoma.

The suit charges Jeffrey and Lauren Lowe with violating the Endangered Species Act and the Animal Welfare Act in their treatment of caged and displayed wildlife that included tigers, lions, a grizzly bear and ring-tailed lemurs.

At one point, the lawsuit alleges, Jeffrey Lowe stuffed "big cat" cubs into a suitcase to transport them into casinos in Las Vegas.

"While in Las Vegas," the lawsuit recounts "Jeffrey Lowe gave a ringtailed lemur under the age of 1 year a shot of Fireball whiskey."

"The Lowes have never been anything but caring and attentive to their animals, and the Lowes are not afraid to fight the U.S. Government in court," attorney Daniel Card told The Oklahoman.

Card added in his emailed statement that the civil complaint was "yet another example of administrative overreach" and that "the public at large should be outraged by it."

Also named in the civil lawsuit is Tiger King LLC, an Oklahoma limited liability company based in Thackerville, Okla., where the Lowes have planned what they call "Tiger King Park."

The name rides the coattails of the popular Netflix series titled "Tiger King," which lavished attention on the former Greater Wynnewood Exotic Animal Park owner who fancied his name to be Joe Exotic.

"I categorically deny any act that can be construed as animal cruelty, ever," Antle told "Access Hollywood," adding that he was "shocked and disappointed" at the charges.

Last June and July, according to the new lawsuit against the Lowes, Animal Plant and Health Inspection Service inspectors found numerous animals in poor health and living in cruddy conditions at the Wynnewood facility. The Lowes did not provide animals adequate veterinary care or sufficient food, investigators said.

Nala was "lethargic, depressed, thin, and would not get up out of the mud even after prompting [and] had discharges emanating from her nose and eyes, and sores on her ears," inspectors recounted. The sickly cub was subsequently transferred to a wildlife sanctuary in Colorado in September.

Federal officials suspended Jeffrey Lowe’s Animal Welfare Act exhibitor license and initiated an administrative action to permanently revoke his license. Lowe then unilaterally terminated his license and moved animals to a property in Thackerville for the planned "Tiger King Park."

The Lowes are "exhibiting and will continue to exhibit their animals by displaying the animals to a film crew and to other members of the public through online sites such as ‘shout out’ videos on Cameo," according to the lawsuit.

The lawsuit seeks an order that the Lowes relinquish possession of all of their ESA-protected animals and stop exhibiting animals without a license to the public.