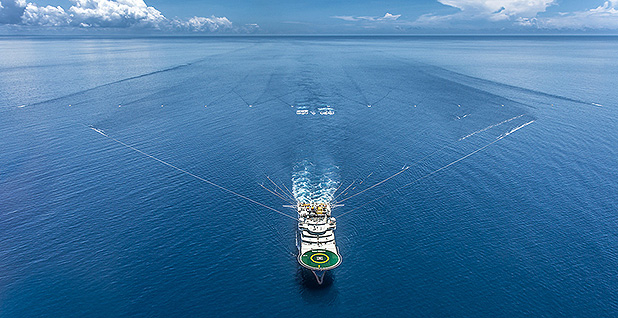 The Trump administration is proposing to approve five ocean seismic survey companies’ requests to search for oil and gas in the Atlantic Ocean, prompting fury from environmentalists.

This morning, the National Marine Fisheries Service posted draft authorizations for firms to incidentally harm marine mammals while employing seismic airguns for exploration of hydrocarbons off the East Coast. The technology sends sound waves deep into the Earth’s crust, monitoring the "echoes" to determine the likelihood of hitting sufficient crude oil and natural gas reserves.

The proposed authorizations will be officially published tomorrow morning in the Federal Register, kicking off a 30-day comment period.

The move was widely anticipated after President Trump repeatedly vowed on the campaign trail to open up more onshore and offshore federal leases to oil and gas drilling. He signed an executive order in April calling for considering parts of the Atlantic for possible drilling (Greenwire, April 28).

Ocean conservation groups blasted the proposed permits, saying they will harm whales and other marine life.

The five draft incidental take permits, or incidental harassment authorizations, essentially would absolve seismic survey companies of responsibility should they inadvertently harm, harass or kill marine mammals in the course of their activities.

"Deafening whales and dolphins to hunt for dirty oil in these sensitive coastal environments is reckless and cruel," Kristen Monsell, an attorney with the Center for Biological Diversity, said in a press release.

CBD also argued that the decision goes against the wishes of coastal communities along the Eastern Seaboard. The authorizations would cover an area stretching from Cape Canaveral off Florida north to the mouth of Delaware Bay, extending east throughout the United States’ exclusive economic zone.

"According to the government’s own estimates, seismic airgun blasting in the Atlantic could injure as many as 138,000 marine mammals like dolphins and whales, while disturbing the vital activities of millions more," said Oceana. The Southern Environmental Law Center also slammed the move.

Seismic survey companies employ mitigation efforts aimed at avoiding harming marine life while conducting airgun surveys. Some firms have also been known to invite conservation groups to monitor the work or to serve as spotters alerting vessels to the presence of marine life that can be potentially harmed by their work. Companies also follow federal protocols designed to protect animals.

The Obama administration had earlier considered seismic exploration for oil and gas in the Atlantic and had even proposed lease sales in Atlantic waters, but later President Obama rescinded those decisions, citing community opposition and the oil price crash that began in mid-2014. Obama’s Interior Department also pulled back on plans to sell offshore oil and gas exploration leases in the Arctic Ocean.

Trump has long promised to reverse those decisions. Green groups are vowing to fight back.

Monsell said the Bureau of Ocean Energy Management can reject permits if they go against mandates under the National Environmental Policy Act and Endangered Species Act.

"We’ll be commenting, urging the administration to deny these harmful applications," CBD’s Monsell said in an email. "Before any seismic [test] can occur, BOEM will also need to issue permits and do supplemental analysis under NEPA and the ESA to analyze the impacts of seismic blasting on North Atlantic right whales and other imperiled species. We believe such analysis should lead to rejection of the permits given the significant, unnecessary harm to marine life already struggling to survive."

The Natural Resources Defense Council is eyeing alliances with the fishing industry to push back against Atlantic oil and gas exploration.

Rick Baumann, founder and owner of Murrells Inlet Seafood in South Carolina, expressed his determination to oppose the permits in a call with reporters organized by NRDC this morning.

"It should be obvious to anyone who looks at this issue seriously that seismic blasting and offshore drilling are a real threat to our way of life and our ability to provide fresh seafood to the public," Baumann said. "It is very difficult for us to understand how the U.S. government would seriously entertain" the companies’ requests, he added.

"Existing resource estimates for the Atlantic [outer continental shelf] are based on data collected from seismic surveys conducted more than 30 years ago," Randall Luthi, president of the National Ocean Industries Association, said in a release at the time. "As the Trump administration moves forward in developing a new Five Year Program for offshore oil and gas exploration, new surveys using modern technology are vital to providing an up-to-date and scientifically accurate picture of the offshore oil and gas resources off our Atlantic seaboard."

Following the oil price plunge from $100 per barrel to as low as $26 per barrel, interest in exploring for crude in the Atlantic and Arctic virtually evaporated. Offshore exploration activity in the Gulf of Mexico fell by more than half as companies shied away from offshore drilling.

But with steadying crude prices in the $50-per-barrel-range, oil companies are again eyeing opportunities in ocean energy exploration. The number of active rigs employed in the Gulf of Mexico has stabilized.