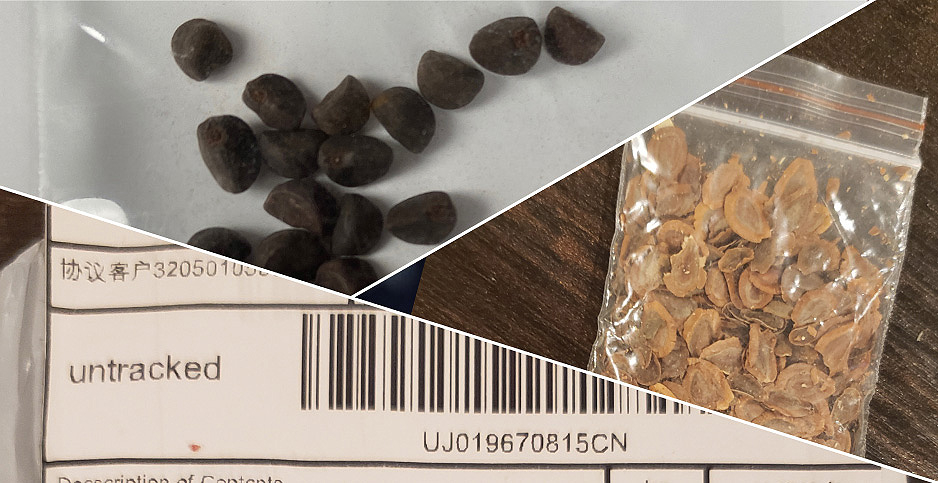 Americans across the country have received mysterious seed packets in the mail, such as these, received in Virginia. Va. Dept. of Agriculture and Consumer Services

The Department of Agriculture is trying to figure out who’s mailing mysterious seeds — seemingly from China — to households in a handful of states, and why.

So far, the department said today, there’s no evidence that the seeds are anything more than a "brushing" scam, possibly to help the seller post fake customer reviews that boost sales. But USDA is collecting them for testing, and advising recipients not to plant them.

"Please hold on to the seeds and packaging, including the mailing label, until someone from your State department of agriculture or APHIS contacts you with further instructions. Do not plant seeds from unknown origins," the department added.

People in several states have reported receiving the packages, in some cases marked as jewelry and with Chinese writing on them.

Among the worries, officials say, is that the seeds could be for invasive species that USDA tries to thwart. A spokesman for USDA said officials are working with the Department of Homeland Security’s Customs and Border Protection agency, which enforces laws on seeds and plant materials that enter the country.

Reports are pouring in from several states, as far separated as Maryland, Kansas, Minnesota, Washington and Georgia, officials said.

In Virginia, the state Department of Agriculture and Consumer Services has taken several hundred telephone calls and more than 900 emails from residents claiming to have received seeds, a spokesman told E&E News.

Importation of seeds into the United States generally requires a permit, and they can’t be for plants on the federal government’s noxious weeds list, according to APHIS.

The federal government takes foreign plants, seeds and produce seriously, and warns about risks and potential liability for people who receive them, including unwittingly as gifts, for instance.

"Whether it’s a souvenir sent by a friend who’s vacationing abroad, food sent from family members living overseas, or seeds purchased for your garden through the Internet, the contents of that package could pose a risk to U.S. agriculture or the environment," according to the APHIS website. "As the package’s intended recipient, you are considered the official importer of record and are legally responsible for it — even if you didn’t know it was coming."

The National Association of State Departments of Agriculture joined in advising recipients not to keep the unsolicited seeds and said it’s working with authorities to unravel the mystery.

"NASDA is working closely with USDA’s Animal & Plant Health Inspection Service (APHIS) and the Department of Homeland Security to understand the origin of these unsolicited seeds from China that have entered our country illegally," said the organization’s CEO, Barb Glenn, in a statement.

"Right now we are encouraging the public to keep the seeds and complete packaging, including mailing information, and contact your state department of agriculture or APHIS state director," Glenn said. "Please do not plant or consume the seeds."