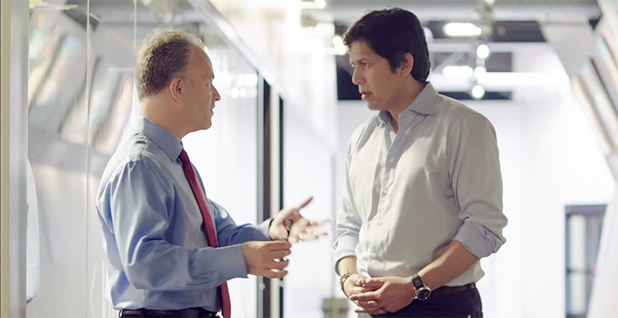 In challenging Sen. Dianne Feinstein (D-Calif.) as she runs for a sixth term, de León, 50, opted against delaying six years on the chance the incumbent might then retire. As he formally launched his candidacy yesterday, he said too much is at stake with President Trump in office.

"We can no longer afford to be polite or patient, conciliatory or complacent," de León told a raucous crowd at Los Angeles Trade Technical College. "We can’t cross our fingers and hope that Trump can change. We can’t compromise our values. We can’t concede, because my friends, it is time to lead. It is time to stop bidding our time, biting our tongue and playing at the margins."

Feinstein, speaking at the Commonwealth Club in San Francisco last month, called for patience with Trump during criticism over his handling of Hurricane Harvey. She said she hoped he had the ability to change, and if he did, he could become a good president. De León was one of the harshest critics at the time, saying, "It is the responsibility of Congress to hold him accountable — especially Democrats — not be complicit in his reckless behavior."

De León, who blasted the Tom Petty song "I Won’t Back Down" at the rally, faces an uphill battle as he challenges Feinstein, 84. De León is largely unknown in the nation’s most populous state. He needs to raise $10 million or more to be competitive and cannot use any of his state campaign funds in the federal contest, analysts said.

He’s running on issues that include climate change and renewable energy, but also universal health care and debt-free college. If he runs too far to the left for the primary, analysts said, he could damage his chances for winning the general election. California holds "jungle" primaries, where the top two finishers advance to the general election regardless of political party. That means de León could face Feinstein in both contests.

"It’s got to be considered a long shot," said Bruce Cain, professor of political science at Stanford University. "Dianne Feinstein has in the past been a strong candidate, able to raise money, able to attract independents and some moderate Republicans. … She has a profile that fits the state’s electorate."

Raphael Sonenshein, executive director of the Edmund G. "Pat" Brown Institute for Public Affairs at California State University, Los Angeles, said he wouldn’t rule de León out, but it will be "a long haul."

"I would describe him as more of an underdog than a long shot," he said, adding, "But underdogs are not hopeless."

Freshman Sen. Kamala Harris (D-Calif.) ran last year after Sen. Barbara Boxer (D-Calif.), first elected in 1992, announced she was retiring. It marked one of the first opportunities in decades to reshuffle the state’s political deck. Both Feinstein and Boxer were elected on the same day 25 years ago. De León must leave the California Senate after next year because of the state’s term limits, and most 2018 races for statewide offices already have leading candidates.

De León said in an interview that climate is a driving issue in his decision to pursue the U.S. Senate now.

"It’s no time to be patient and complacent," de León said.

"I don’t think it is time for patience with the president, who is thinking of undermining our clean energy laws, our clean air, our clean water, safe water drinking act, a president who’s pulled out of Paris," he said, referring to an international climate agreement formed in Paris in 2016.

"The existential threat to our nation, to our world, is the issue of climate," de León added.

Asked whether Feinstein wouldn’t also take on that issue, he answered, "If I felt confident, I wouldn’t be moving forward." He said he believes he can make climate a reason voters show up, especially after the hurricanes in Texas and Puerto Rico and the deadly fires in California.

Bill Carrick, campaign strategist for Feinstein, said her experience is a plus.

"She’s well-positioned to protect California from the Trump administration and the excesses of the Republican majority, as opposed to a back bencher," Carrick said. "We need somebody who’s going to be in the U.S. Senate with real clout, real strength to fight for us."

Feinstein remains well-liked by many Californians. Her job performance won approval from 54 percent of likely voters in a Public Policy Institute of California poll released last month. But in the same survey — conducted before she announced she’s seeking a sixth term — half of likely voters said she shouldn’t run for re-election.

Surveys also have delivered bad news for de León. Though he’s led the California Senate for three years, he has almost no name recognition statewide. A March poll from the University of California, Berkeley, Institute of Governmental Studies asked likely voters who should run for Feinstein’s seat if she chose not to seek re-election, and 3 percent named de León.

It was the same share as Tom Steyer, hedge fund investor-turned-Democratic activist, who’s mulling a run for the Senate as well as other offices (E&E Daily, Oct. 16).

Some other leaders of California’s Legislature who have attempted to move to higher office haven’t succeeded, said Garry South, a California-based Democratic strategist. John Pérez, former California Assembly speaker, ran for state controller in 2014 and lost in the primary.

"Very few people outside of your own district have a clue who you are in a big state," South said.

Victor Griego, a Democratic strategist based in Los Angeles, called de León "a smart, calculated, elected official" who likely has done polling to see how he’d fare against Feinstein, and similarly has looked at where he can raise campaign funds.

"I trust that he’s done his homework, to believe that he can do this," Griego said.

A super political action committee launched this week — A Progressive California — to support de León, has already started working on his behalf. The group posted an internet ad saying de León "has led the resistance against Donald Trump in California, showing we can lead the nation on climate change, better jobs, universal health care and immigrant rights. We need a fearless leader to stand up for our values in the U.S. Senate."

Officials with the super PAC did not respond to a request for more information.

De León said that in raising money he plans to "work closely with clean energy space, energy efficiency, electric vehicle folks who are warriors to fight climate, just create a coalition of folks from every part of the state to move forward a campaign that could be competitive." He said he cannot match Feinstein "dollar for dollar, but millionaires don’t always win."

Feinstein is worth $94 million, according to the Center for Responsive Politics.

How de León fares could depend on whether a competitive Republican gets into the race, Cain said. If one GOP candidate emerges and other Republicans get behind that person, he or she could finish in the top two, knocking out either de León or Feinstein.

Rob Stutzman, Republican strategist in Sacramento, said the race is attractive for a GOP candidates because Feinstein is older and de León is seen as far left.

If more than one GOP candidate enters, they could split the conservative vote and not make the top two. That happened last year when Harris, California attorney general at the time, finished first in the primary followed by then-Rep. Loretta Sanchez (D). Harris won the general election by a wide margin.

Stutzman said Sanchez failed to let Republicans know she was the more moderate option and didn’t define well issues where she differed from Harris. He said Republicans would pick Feinstein over de León.

Feinstein might also win those in California registered as "declined to state," or independent, Stutzman said. The state’s electorate currently is 45 percent Democratic, 26 percent Republican and almost 25 percent declined to state.

"I do not subscribe to that analysis, that in the top two, that Republicans, those right of center, would naturally flock to Sen. Feinstein," he said. "There’s a high probability that they won’t vote at all in the Senate race." He noted that Sanchez was considered right of center and they didn’t vote for her.

At the rally yesterday, de León promoted his work on environment and energy issues. His recent efforts include sponsoring S.B. 350, the legislation that increased California’s renewable energy mandate to half of electricity generation by 2030. De León also helped secure a 10-year extension of the state’s cap-and-trade program for cutting carbon emissions.

"Unlike Washington, we passed the toughest greenhouse gas emission standards in America, with strong renewable energy laws and clean energy laws," he said.

Few differences have emerged between Feinstein and de León on energy, said Steve Maviglio, Democratic strategist in California. De León has the advantage, however, of leading the state Senate with Democrats in charge of both sides of the Legislature. Democrats have a supermajority in both chambers in Sacramento. Feinstein, in contrast, has limited options in the Republican-controlled Senate.

"He needs to point to legislative accomplishments. He’s got a litany of them when it comes to clean energy," Maviglio said.

De León’s likely to get support from environmental justice groups, those that speak out for people who live near freeways, factories and other sources of pollution and want policies that help those communities, Griego said. It’s an area where the state Senate leader has worked actively, he said.

Carrick noted Feinstein and de León differed on whether the state should step in to scuttle a groundwater project near a Mojave Desert monument. Cadiz Inc. plans to pump water from an aquifer under land it owns and pipe it 43 miles for delivery to 100,000 urban Southern California households. The land in question is surrounded by the Mojave Trails National Monument, a 1.6-million-acre site President Obama set aside in early 2016.

Last month the California Senate Appropriations Committee shelved A.B. 1000, a bill that would have blocked the Cadiz development (Greenwire, Sept. 5). Many said that the committee chairman needed approval from de León to stop the measure. The Trump administration has cleared the way for the project.

De León spokesman Roger Salazar said in an email that "it was the Appropriations Committee that felt the bill was premature given that the State Lands Commission had jurisdiction. That process should play out before opponents take the extraordinary step of asking the Legislature to override" the California Environmental Quality Act, an environmental protection law.

De León has received $9,100 in campaign contributions from Cadiz — $5,000 this year for a fund aimed at running for California lieutenant governor and $4,100 for his California Senate re-election campaign in 2014.

De León likely will seek to mobilize the Latino vote and those in Southern California, where two-thirds of state residents live, Griego said. De León is from Los Angeles. However, Northern California voters traditionally have turned out better than those in the southern part of the state. Feinstein is from the San Francisco area.

Carrick said Feinstein has never lost the vote in Los Angeles County during a primary and that she had strong support from Latinos, women, African-Americans, Asians, the LGBT community and "environmentally conscious voters."

In terms of the voting base for de León, Carrick said: "That’s more of a wish list coalition he’s talking about than actual reality. He’s totally unknown. All those voters he’s talking about, they don’t know who he is."