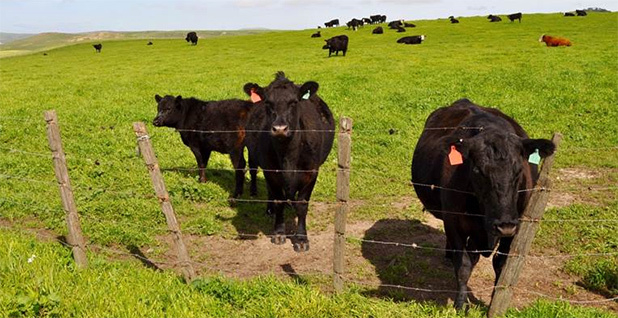 A key senator has weighed in on behalf of ranchers in their brewing legal battle with environmentalists over the use of a national park on California’s coast.

Sen. Dianne Feinstein (D-Calif.) urged Interior Secretary Sally Jewell to have the National Park Service "honor existing ranching and dairy leases" at Point Reyes National Seashore, according to a letter obtained by Greenwire under the Freedom of Information Act.

Those leases have been challenged in a lawsuit by environmental groups who argue the ranchers’ cows have trampled on the park’s plant life and threatened the recovery of tule elk in the area (Greenwire, March 14).

"While I am disappointed by the recent lawsuit, I firmly believe that multi-generational ranching and dairying is not only important both ecologically and economically for the area, but also entirely consistent with Congress’s intent," Feinstein said in the March 18 letter.

In a statement to Greenwire, Feinstein said she was collaborating with NPS to maintain ranching operations in the area.

"I’m working with the National Park Service and surrounding communities to ensure that the Ranch Comprehensive Management Plan expected by the end of the year will allow for continued ranching at the Point Reyes National Seashore," she said. "I strongly believe that ranching in the area is entirely consistent with Congress’s intent when it established Point Reyes and will continue to support that belief in Congress."

Craig Dalby, a NPS spokesman, said the agency had responded to the senator.

As for whether NPS will continue its support for the ranching and dairy farms at Point Reyes in light of the lawsuit, Dalby referred Greenwire to the Justice Department. Justice did not immediately respond to a question about the leases.

The Park Service did respond to Feinstein with a letter sent earlier this month by Laura Joss, regional director for the agency’s Pacific West Region, which was obtained by Greenwire.

In her letter, Joss said the agency is "proud" to work with the ranchers and is "committed to honoring Congress’ intent regarding these beef and dairy ranches."

The California senator is a powerful supporter for the ranchers to have in their fight with environmental groups. In the past, Feinstein has been critical of NPS’s actions at the seashore park, adding provisions to appropriations bills regarding the agency’s management of the area (E&ENews PM, March 29, 2012).

Feinstein’s letter concerns historic ranching practices at Point Reyes, a gem of the National Park System about an hour north of San Francisco.

In the face of proposed development along the coastline in the 1950s, the government negotiated the creation of the seashore with conservationists and more than 20 ranching operations.

The seashore was officially established in 1962, and the government ultimately purchased the ranchers’ land. Almost all of the ranchers signed 20-year leases to continue their operations within the park.

Today, about a quarter of the park’s 71,000 acres are a "pastoral zone" where ranchers graze their cattle.

The cows, however, have come into conflict with herds of tule elk, which NPS reintroduced in 1978 after the species was on the verge of extinction.

Since then, the elk populations have rebounded significantly, and the park’s elk have increasingly competed with cows for water and other resources during California’s current drought.

Consequently, three environmental groups — the Center for Biological Diversity, Resource Renewal Institute and Western Watersheds Project — sued earlier this year in an attempt to force the NPS to update its general management plan for the seashore, a document that hasn’t been revised since 1980.

They contend that the plan should lay out the priorities for wildlife, recreation and grazing in the park. Further, NPS must protect the seashore’s resources from impairment — and cattle grazing is doing just that, they argue.

Local ranchers contend that the lawsuit is aimed at kicking them out of the park.

Feinstein firmly threw her support behind the ranchers in the letter.

She said the government "assured residents they could continue ranching."

"We must keep that promise," she wrote.

The Park Service has repeatedly expressed its support for the ranchers.

Former Interior Secretary Ken Salazar (D) explicitly backed the ranching operations in a November 2012 memo that warned that the government would not extend the oyster farm’s lease.

"These working ranches," Salazar wrote, "are a vibrant and compatible part of Point Reyes National Seashore, and both now and in the future represent an important contribution to the Point Reyes’ superlative natural and cultural resources."

Feinstein went further than that. The former San Francisco mayor also backed the ranchers’ call for NPS to allow them to diversify their operations with new livestock and high-value row crops, such as vineyards.

The environmental groups behind the lawsuit strongly oppose such proposals.

"[D]iversification of crops and income is now more important than ever," Feinstein wrote. The upcoming NPS ranch management plan, she added, "should allow for some level of agricultural diversification … including small-scale row crop farming, production of different livestock species, and allowance of agricultural processing and sales."

The Center for Biological Diversity sharply criticized the letter, calling it "disturbing" and contending that it contains several misrepresentations.

He added that the leases are "discretionary."

"The Park Service can cancel them at any time," he said.

Miller said ranching must fit into NPS’s general management policies for the seashore, including complying with the requisite environmental laws.

"She wants to change the rules for ranching at Point Reyes," he said.

Miller was most critical of Feinstein’s support for the rancher’s diversification request.

"She is trying to tell the Park Service what activities should be allowed," he said. "That’s not her place, [and] that’s not her job."