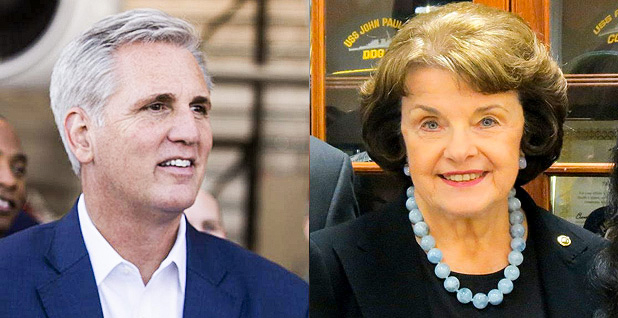 California Gov. Jerry Brown (D) on Friday backed a bid by Sen. Dianne Feinstein (D-Calif.) and House Majority Leader Kevin McCarthy (R-Calif.) to extend provisions in a 2016 bill to shuttle more water from the Golden State’s wet north to farms and cities in the arid south.

Feinstein and McCarthy are seeking to insert a rider into spending legislation that provides a seven-year extension of measures in the 2016 Water Infrastructure Improvements for the Nation, or WIIN, Act.

Environmentalists and fishing groups lambasted the bill, saying the WIIN Act provisions were intended to be an emergency measure in response to historic drought conditions. They are set to expire in 2021.

Brown, who is coming to the end of his term as governor, said in a statement that he supports the Feinstein-McCarthy language, including "important provisions … that enable California water users to participate in voluntary agreements and help improve river flows to restore fish populations."

But due to the death of President George H.W. Bush, congressional leaders are expected to punt the spending fight this week and pass a one- or two-week measure maintaining funding levels. The move will give legislators more time to negotiate riders like Feinstein and McCarthy’s.

The Feinstein-McCarthy rider comes as the State Water Resources Control Board is considering controversial new water quality standards for San Francisco Bay and the delta, the state’s water hub. Those standards haven’t been updated in more than 20 years, and the proposal calls for curtailing deliveries to San Francisco and Central Valley farmers to protect stream flows in San Joaquin River tributaries for endangered salmon and other species.

The board is scheduled to vote Dec. 12, after Brown and Gov.-elect Gavin Newsom (D) sent a letter on election night urging it to delay the vote (Greenwire, Nov. 7).

Brown has pushed local water agencies to instead make deals voluntarily to fund habitat restoration and other steps to protect the fish in return for larger water deliveries than currently outlined in the proposal.

The Feinstein-McCarthy language would also authorize the Interior Department to assess fees from federal Central Valley Project contractors for such measures, according to reports.

Fishermen and environmentalists were swift to criticize Brown over the weekend. Some suggested he backed the rider language in order to secure support from the Trump administration for his plan to build twin large tunnels to convey delta water — a legacy project for the governor that appears on life support as he leaves office.

"There’s no way to sugar coat this," John McManus of the Golden Gate Salmon Association said in a statement. "Today Governor Brown took a big step towards selling out California’s biggest salmon runs in order to keep the Trump administration from killing the governor’s Delta tunnels."

The Brown administration has disputed in media reports that there is any quid pro quo at play in the governor’s support for the measure.

WIIN Act provisions include $670 million for new water storage projects. That would likely include a controversial plan to raise Shasta Dam in Northern California about 18.5 feet. The more-than-600-foot dam impounds the state’s largest reservoir, and agricultural interests have been pushing to expand it for years.

Environmentalists thought the proposal was dead because it appears to violate state law. But McCarthy breathed new life into the project last spring when he secured $20 million for pre-construction planning in an omnibus spending bill (E&E Daily, March 23).

The Brown administration opposes raising the dam, which in total would likely cost more than $1.3 billion.

Another project that could receive funding is expanding the San Luis Reservoir southeast of San Jose.

So far, few funds from the WIIN Act have gone toward new funding projects since it was passed in 2016 beyond the $20 million for raising Shasta Dam.