Feinstein shifts on fracking as Dems struggle with messaging 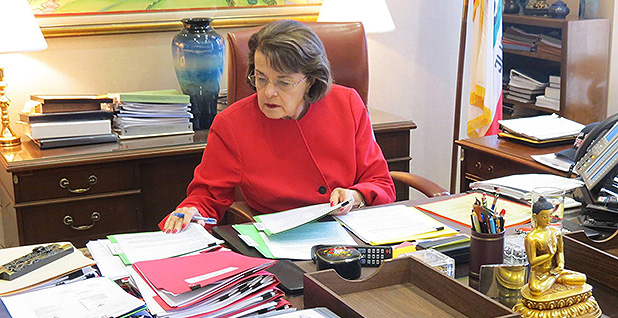 Sen. Dianne Feinstein supports a fracking ban in California, signaling a shift to the left as she fights to fend off a liberal challenger.

"I’m not for fracking, particularly with respect to California," the California Democrat told E&E News this week, breaking from her past positions on natural gas development. When asked whether she supports a ban, she said, "Oh yeah, absolutely."

Feinstein has previously stopped short of calling for a fracking ban, but that’s changed as she tries to hold on to her seat in an election season that could see a groundswell of progressive voters who are carrying a hefty dose of disdain for President Trump.

She appears to be trying to keep pace. Former state Senate President Pro Tem Kevin de León, a Democrat challenging Feinstein in November using the state’s top-two primary system, has called for phasing out the state’s reliance on oil and gas and switching to 100 percent renewables by 2045.

Her shift on fracking is representative of intraparty battles over climate messaging taking place as the 2018 midterm elections draw close and the 2020 presidential primary fight looms ahead.

The Democratic Party’s energy policy occupies a large space, with one wing calling for an outright ban on oil and gas drilling while others take a more moderate approach. Following the unabashed support for fossil fuels by the Trump administration, Democratic positioning on fracking stands to be a thorny climate issue.

Feinstein’s call for a fracking ban is a significant shift and a direct appeal to Democrats who want more aggressive climate action, said RL Miller, president of Climate Hawks Vote and a supporter of de León. She said progressives view a shift away from fossil fuel dependence as being equivalent to universal health care.

"One hundred percent renewables is the ‘Medicare for all’ of our time, which is to say some people are going to embrace it right off the bat, especially progressives, and others are going to have to be dragged kicking and screaming, but that is the direction of the party," she said.

The Democratic Party’s progressive wing has already achieved some formidable victories, such as Alexandria Ocasio-Cortez’s upset of a 10-term incumbent and chairman of the House Democratic Caucus in New York’s 14th District.

Democrats have also won in districts in which they have historically struggled to compete. In March, Rep. Conor Lamb (D) narrowly beat Republican Rick Saccone in a special election for Pennsylvania’s 18th district. The seat was held by a Republican for 15 years.

Those two victories were hailed by Democratic Party officials as signs portending a blue wave in November. But they also represent a major divide on energy policy. Pennsylvania’s robust natural gas industry means politicians like Lamb are unlikely to ever support a ban, yet it’s a critical state for Democrats hoping to take back the White House in two years. Ocasio-Cortez, by contrast, has called for the nation to switch to 100 percent renewable energy by 2035.

In Washington, the strains of a lack of cohesive Democratic climate policy are starting to emerge.

On Capitol Hill this week, a number of lawmakers declined to weigh in on whether they would support a fracking ban, an issue that the progressive wing of the party has made a priority, especially after Sen. Bernie Sanders (I-Vt.) called for it in the 2016 presidential election. Even some of the most vocal proponents of environmental actions had more modest goals.

"Our best focus is putting a price on carbon; that’s the most significant thing to be done, and that’s also the thing for most Republicans who have thought about climate come to as the correct solution," said Sen. Sheldon Whitehouse (D-R.I.), who gives weekly speeches on the Senate floor on the importance of addressing climate change. "I think a lot of the other issues can be handled state by state. I do think the EPA has dramatically failed paying attention to the methane leakage into the water or the air, and that’s a disgrace that needs to be fixed."

Democrats largely avoided discussing a fracking ban, whether to shoot it down or to endorse it. Sen. Ed Markey (D-Mass.) declined to comment on whether he would support a ban. So did Democratic Sens. Elizabeth Warren of Massachusetts and Cory Booker of New Jersey, two possible 2020 presidential contenders.

"I sincerely don’t want to look to 2020. I think all of America should be focused on this moment and the November elections four months from now," Booker said. "We have a Supreme Court that could shift away on climate policy in a way that could hurt all Americans and undermine the ability of the federal government to stop polluters [and] to stop corporations from hurting our environment."

Sen. Bob Casey (D-Pa.) said he would not support calls for a fracking ban and instead urged greater enforcement of regulations at the state level. He said he wants the larger Senate to embrace his bill that would require drillers to disclose the chemicals they inject into the ground during the fracking process.

"It won’t get done right now," she said. "A lot of this is timing, too, and at some point, you get tired of proposing things and they don’t go anywhere; you have to use timing and bringing people together and having a movement going."

Her spokesman later clarified that Feinstein generally supports a ban on fracking, but particularly in California.

Voters don’t typically list climate issues as a priority at the polls.

And in the current election cycle, Democrats have already shown that health care and immigration are motivating voters in the primaries ahead of the midterms.

And yet climate change has become more of an issue for Democrats than ever before, according to multiple polls. The Trump administration’s rolling back of President Obama’s climate policies and rejection of mainstream climate science have already motivated national marches. That means the Democrats’ climate policy, and a fight over fracking, could become more of an issue in the 2020 elections than it was two years ago.

After Sanders called for a total ban on fracking and an aggressive push to ramp up renewable energy, he used the issue to attack Hillary Clinton while campaigning across New York, where Democratic Gov. Andrew Cuomo banned fracking in 2014 after years of pressure from environmental activists. After Sanders’ comments, Clinton shifted her stance. She had generally followed the Obama administration’s approach of treating fracking as a bridge fuel. She stopped short of calling for a ban but said, "I do not think there will be many places in America where fracking will continue to take place."

Climate change ranked third among the priorities of self-described Democratic voters in a February poll taken by Civis Analytics, a data science and polling firm run by former Obama campaign staffers. Likely Democratic voters ranked climate change behind health care and gun control, and ahead of immigration, in the poll. A January Pew Research Center poll showed that 68 percent of Democrats believed climate policy should be a primary issue, up from 56 percent in 2016.

This week, a centrist Democrat group, New Democracy, launched a new push to craft a climate policy that includes all wings of the party. Paul Bledsoe, a former Clinton White House climate adviser and strategic adviser to New Democracy, said climate policy should be a "big tent" issue that avoids talk of bans but encourages the growth of renewables while also embracing natural gas drilling. He said Democrats have a wide-open field in which to stake their climate policy and that it extends from activists like 350.org’s Bill McKibben, who calls for 100 percent renewables and fossil fuel divestment, to Trump’s full-throated endorsement of all fossil fuel energy.

Energy and climate have become a cultural flashpoint, and the Democratic Party has to recognize that it can’t afford to alienate voters in energy-rich states, Bledsoe said.

"The energy boom was largely created by the Democratic vision of bringing advanced technology to the energy sector," he said. "It’s working. We’re creating millions of new jobs, we’re reducing emissions, we’re growing the economy. Why aren’t we taking credit for this?"