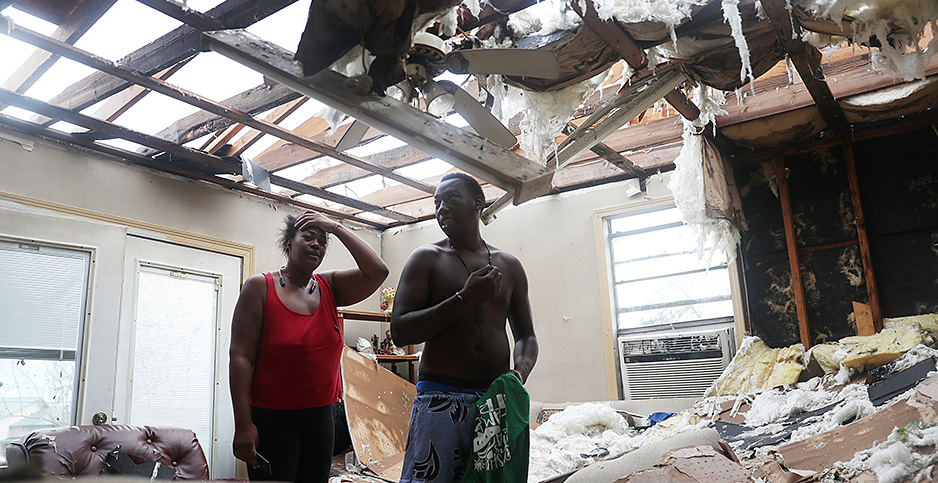 Latasha Myles and Howard Anderson stand in their living room after Hurricane Laura blew their roof off in Lake Charles, La., in August 2020. Joe Raedle/Getty Images

When President Biden announced May 24 that he was doubling the amount of money the government distributes for climate mitigation projects, he vowed to help communities that are "too often overlooked."

But meeting that goal will be difficult because the mitigation money will be allocated through a process that forces states and localities to compete against each other. Experts say the system is notoriously difficult for low-income and minority communities.

Competitive grant programs, such as the Federal Emergency Management Agency initiative that Biden boosted, require exhaustive applications that can be hard for low-income communities to complete because they often lack the staff and expertise — or the money to hire a consultant.

"It’s a really daunting and complex program," said Amelia Muccio, director of mitigation at Hagerty Consulting Inc., an emergency management firm. "There is a barrier to entry."

The FEMA program, called Building Resilient Infrastructure and Communities, or BRIC, encourages applications from small, impoverished communities by pledging extra federal funding for their projects if the agency approves them.

BRIC was established last year to help states and localities fortify themselves against natural disasters. It pays at least 75% of the cost of projects such as demolishing flood-prone buildings or hardening utilities. The program covers 90% of project costs in small, impoverished communities, which are defined as having up to 3,000 residents and an average per capita income up to 80% of the national average.

FEMA records show that small, impoverished communities accounted for a minor share of the applications submitted in January for the first BRIC grants, which will be announced this summer.

A total of 991 applications were submitted from states and localities seeking a combined $3.6 billion in BRIC funding.

Small, impoverished communities accounted for 98 of the applications — about 10% — but sought a combined total of $123 million, which is just 3% of the overall money being sought.

FEMA faces a painstaking selection process, with only $500 million of BRIC money available this year. Biden doubled that figure to $1 billion for next year.

The number of applications from small, impoverished communities "is what I’d expect given the barrier to entry," said Muccio, the consultant. "Just reducing their cost share [from 25% to 10%] probably isn’t enough."

"There are a lot of areas that are communities of color or low-income communities that are very much threatened by climate change. Many are neighborhoods in cities or suburban areas or larger rural communities," Gordon said.

In New Jersey, the nation’s most densely populated state, "very few places are going to meet that" definition of small, impoverished community, Gordon said. "Yet there are a lot of places that don’t meet that definition that are going to struggle to come up with that cost match," he said.

None of the applications from small, impoverished communities came from New Jersey.

The only state with no applications was Mississippi, which is the nation’s poorest state by several measures of income and poverty, and also one of the most exposed to flooding.

Mississippi has sustained more flood damage than all but five states, according to an E&E News tally of payments by FEMA’s flood insurance program. The state has struggled previously to tap federal disaster aid because it couldn’t come up with the necessary matching funds.

Mississippi Emergency Management Agency Executive Director Stephen McCraney acknowledged in a statement to E&E News that "Mississippi did not take full advantage of the monies provided by FEMA," but suggested that would change.

The state is "increasing its outreach" to potential applicants "to ensure we take full advantage of the new grant cycle" for BRIC funding, said McCraney, who became executive director in January three days before the deadline to apply for this year’s round of BRIC grants.

Equity has been a concern for BRIC since FEMA began to set up the program after it was created as part of a disaster-reform law enacted by Congress and former President Trump in late 2018.

FEMA guarantees each state and territory at least $600,000 in BRIC funding, and it has set aside $20 million for federally recognized Indian tribes.

But many tribal organizations told FEMA last year that they needed more than a set-aside and a 90% federal cost share. They urged the agency to pay 100% of the costs of their BRIC projects.

"Our tribes are small and needy, and are unable to supply the ten percent non-federal cost share requirement," Vivian Korthuis, CEO of the Association of Village Council Presidents, wrote in formal comments to FEMA as it was setting up BRIC. The Alaska-based council is a consortium of 56 tribes.

FEMA currently pays 100% of the cost of some mitigation projects, such as demolishing or elevating homes that have been flooded repeatedly and are a drain on the agency’s flood insurance program.

"If we’re truly trying to talk about equitable path forward in FEMA programs, then zero percent makes sense to me," said Muccio, the consultant.

Last year, Muccio was working with a small, impoverished community that was struggling to put together an application for BRIC funding and to come up with money to pay for 10% of the cost.

Muccio said she asked FEMA if another entity could apply on behalf of the community so long as the BRIC money would be spent entirely within the community. FEMA said no, and that it only would pay 90% of a project cost if an application came from a small, impoverished community.

"That’s why they dropped out," Muccio said.