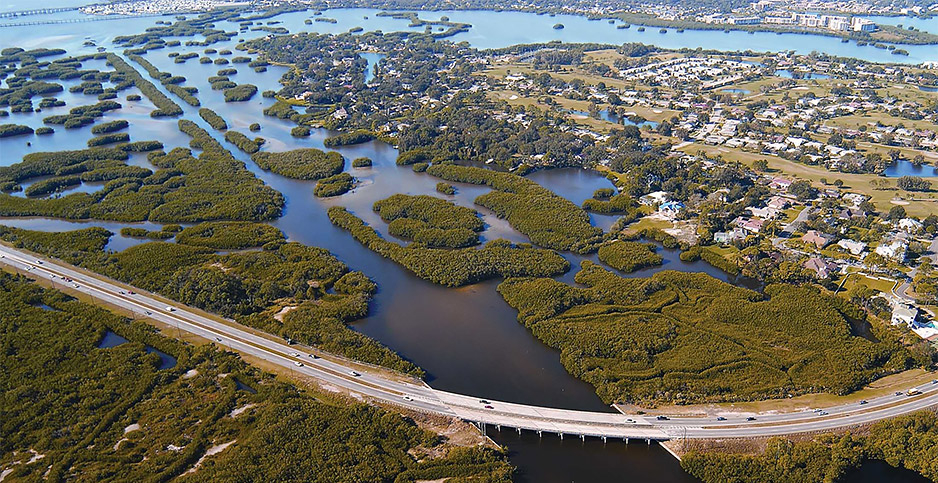 Wetlands like this one in Florida can reduce damage from floods. FEMA changed its policy that favored sea walls and other hard infrastructure over natural flood protections. NOAA

The Federal Emergency Management Agency has taken a dramatic step to encourage communities to use environmentally friendly features such as wetlands for flood protection instead of building sea walls and levees.

A new FEMA flood policy released late last month with no public announcement is drawing praise from environmentalists because it will promote mitigation projects that provide environmental benefits in addition to flood protection.

FEMA’s policy boosts the nationwide push for "nature-based" flood control such as wetlands, open space and reefs over traditional flood barriers that are built to contain rivers and coastal storm surge and can disrupt the natural environment.

"We’re really excited about the potential," said Sarah Murdock, director of U.S. climate resilience and water policy for the Nature Conservancy. "FEMA has taken pretty clear steps to support and promote the potential of nature-based projects for flood risk reduction."

Those projects can provide a variety of environmental benefits such as species habitat, improved air and water quality, climate moderation, and erosion control. They also can have aesthetic and recreational value.

The three-page policy revises how FEMA rates state and local applications for agency funds that pay for flood mitigation as it decides which projects to approve. FEMA distributes between several hundred million and several billion dollars a year for projects aimed at reducing flood damage to buildings and infrastructure.

Under the revised policy, signed Sept. 28 by Deputy Associate Administrator David Maurstad, FEMA will evaluate projects based on their combined flood protection and environmental benefits.

The policy could boost flood mitigation projects such as home buyouts that involve removing residential structures from flood zones and leaving the land empty, and the restoration or expansion of flood-absorbing natural features such as wetlands, reefs and floodplains.

In an email to E&E News, FEMA said one type of project that its new policy could help is the use of natural features to strengthen a riverbank in a rural area so that a nearby road stops being flooded. Under the old policy, FEMA might have rejected the project because the flood protection benefit was minor due to limited use of the nearby road.

But under the new policy, the project could qualify for FEMA funding because it would provide environmental benefits in addition to flood protection, the agency said.

"The natural environment plays an important role in a community’s resilience strategy," FEMA said in its email.

"It happens to be one of those things that has fairly broad agreement from both sides of the political aisle," said Rowan Schmidt, program director at Earth Economics, a consulting firm that works with nonprofits and agencies.

"In the past we’ve relied on gray approaches like bigger levees and sea walls. Now folks are recognizing that a nature-based solution or a hybrid green-gray solution is more cost-effective than just gray alone or just green alone," Schmidt added.

Grannis of the Audubon Society said FEMA’s policy could help promote nature-based flood projects at other federal agencies and in communities that have relied on flood containment measures.

"As we can demonstrate the effectiveness of nature-based approaches, that can change how state and local governments are thinking about coastal resilience," Grannis said.

Chad Berginnis, executive director of the Association of State Floodplain Managers, said that any changes will be gradual.

"I don’t want to be overly excited because the reality is much of the country, when it comes to flood mitigation, they know and understand the hard solutions, the sea walls and levees. It would be naive to say there isn’t a huge demand for that," Berginnis said. "It’s a good policy change. As with any of these policies, we’ll have to see how it plays out in implementation."

The policy also applies to disaster recovery funds that focus on hazard mitigation.

FEMA said it plans to explain the new policy to states and municipalities in the coming weeks and encourage them to incorporate nature-based solutions in upcoming applications for hazard reduction grants.