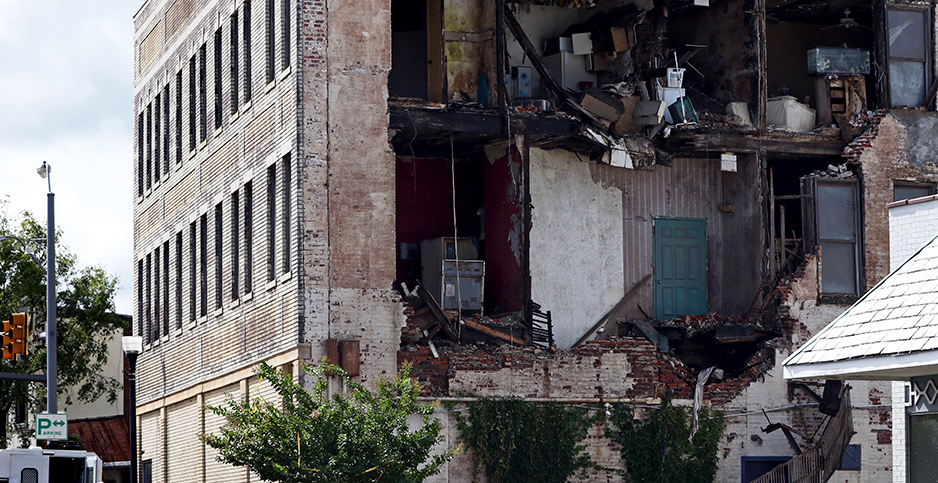 The Federal Emergency Management Agency is proposing to slash disaster aid to states by making it substantially harder for them to qualify for assistance after extreme weather events like floods, wildfires or storms.

A FEMA proposal published today would be one of the most significant revisions of federal disaster policy in nearly a half-century and comes as states grapple with massive fiscal shortfalls due to the pandemic.

The plan would hit affluent states particularly hard because FEMA would for the first time consider each state’s wealth in deciding whether to approve a governor’s request for disaster aid.

Wealthy states such as Connecticut, Massachusetts and New York would have to show much higher levels of damage than less affluent states such as Alabama, Mississippi and West Virginia to receive aid.

The proposal could take years to implement and will fall to the incoming Biden administration. It promises to generate a firestorm of opposition from state and local officials.

FEMA is seeking to shift the financial and logistical burden of "minor disasters" from the agency to states. FEMA says that would allow it to focus on the "catastrophic disasters" that are becoming more frequent as climate change intensifies storms, wildfires and flooding.

FEMA’s concern centers largely on the availability of personnel and reflects years of complaints by agency leaders about having to send employees to help states after minor disasters. The agency had a catastrophe of its own in 2017 when hurricanes Harvey, Irma and Maria struck in quick succession and FEMA was delayed in getting employees to Texas, Florida and Puerto Rico because so many of its workers were spread around the country handling minor disasters.

The agency is "unable to properly meet these demands" of catastrophic disasters "when such a large portion of FEMA’s staffing and focus are committed to numerous and cumulative smaller disasters," it says in the proposal. FEMA disaster workers are "historically overcommitted to smaller disasters."

FEMA estimates that 27% of the 585 disasters it approved from 2008 to 2017 would not have qualified under the system it is proposing to adopt.

An E&E News investigation last year found that FEMA had wasted $3 billion and misused thousands of its employees by responding to hundreds of minor disasters that states could have handled on their own (Climatewire, Aug. 19, 2019).

FEMA projects that it would save $270 million a year by approving fewer disasters under its more stringent criteria. That’s a small portion of the nearly $12 billion FEMA has spent annually on disaster aid since the mid-2000s.

But FEMA makes clear in its 86-page proposal, published today in the Federal Register, that it is more concerned about disaster response than money.

In making local governments less reliant on FEMA, the agency aims to force states to build their own resilience and disaster-response capacity. The current system creates "disincentives for states to invest in disaster response" and "undermines FEMA’s mission to better prepare the nation for disasters," the agency says in its proposal.

The proposal does not affect the agency’s Individual Assistance Program that gives emergency cash, supplies and housing to individuals in a disaster area. The proposal also would not affect Public Assistance after the nation’s largest disasters.

FEMA is aiming to scale back Public Assistance by setting higher damage thresholds for states to qualify for the aid and tying the thresholds to a state’s wealth.

FEMA has for decades approved governors’ requests for Public Assistance when the projected cost of a disaster exceeded a dollar threshold that varies according to a state’s population. California, the nation’s most populous state, currently must show FEMA that it sustained $58 million in damage to get federal aid. Montana needs to show only $1.5 million in damage.

But by considering states’ wealth instead of population, FEMA would establish huge disparities between states with similar populations.

Every state would have to show higher levels of damage to qualify for Public Assistance under FEMA’s revised system, though for some the increase would be small.

Mississippi, the nation’s least wealthy state according to the index FEMA plans to use, would have to show $4.5 million in damage — up slightly from the current level of $4.4 million.

FEMA says wealth "is a better measure" than population of a state’s ability to handle a disaster, adding that FEMA’s current evaluation does "not provide an accurate measure of states’ capabilities to respond to disasters." Federal law says FEMA can provide aid only when a disaster is "beyond the capabilities" of a state and the affected local governments.

FEMA plans to measure wealth using a Treasury Department index that calculates each state’s "total taxable resources," which includes personal and business income, corporate profits, and other items the states could tax to raise revenue. Treasury updates the index every year.

The Government Accountability Office has urged FEMA since 2001 to use the Treasury index to evaluate state requests for Public Assistance aid and has repeatedly criticized FEMA for approving too many requests.

But FEMA has failed to scale back disaster aid.

Four years ago, in the Obama administration’s final weeks, then-FEMA Administrator Craig Fugate proposed establishing a "disaster deductible" that would require states to spend money on disaster mitigation before they could receive Public Assistance aid. Fugate is a member of the Biden transition team.

Environmental groups and insurers hailed Fugate’s proposed regulation. But FEMA dropped the idea in 2018 amid an avalanche of criticism from state and local officials and some members of Congress who said it was confusing and an abrogation of federal responsibility.

In late 2018, Congress enacted a sweeping disaster law that includes a requirement ordering FEMA to "update the factors" it considers when evaluating governors’ requests for disaster aid. Today’s proposed rulemaking responds to the mandate.

Although environmental advocates and FEMA officials have been pushing for years to restrain federal disaster aid, the timing of FEMA’s proposal could hardly be worse for states.

The economic slowdown from the pandemic has devastated state budgets, forcing governors to slash programs, furlough and lay off workers, and increase taxes.

Several legislative measures are pending in Congress that would force FEMA to pay states more disaster aid by reimbursing 100% of some disaster costs instead of 75%.

FEMA is accepting comments from the public on its proposal until Feb. 12.