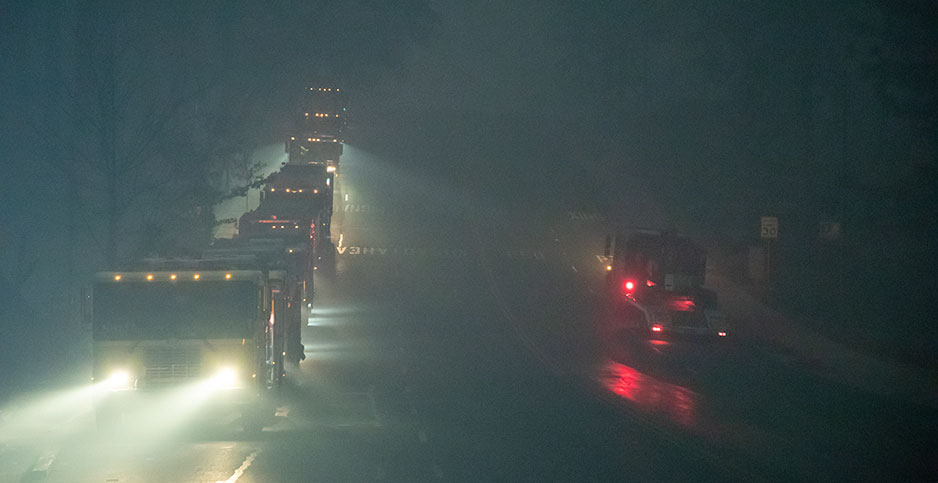 The Trump administration’s latest National Preparedness Report, which describes the greatest threats and hazards to the country, says nothing about climate change, drought or sea-level rise.

The 2019 report is the eighth annual summary of U.S. vulnerability to threats such as disasters and terrorism but the first to eschew the word "climate," except for one reference to "school climate" in a section on preventing school violence.

"Drought" and "sea-level rise" also are absent, even though the report notes the devastating California wildfires of 2018, which killed 100 people, were widely blamed on a decadelong drought that turned the state’s forests into tinderboxes.

The preparedness report, written by the Federal Emergency Management Agency, is one of the administration’s latest steps to deny the dangers of climate change, despite government warnings that global warming is increasing the frequency and intensity of natural disasters.

FEMA’s 2018-2022 strategic plan, released in March 2018, also did not mention climate change, unlike the report published four years earlier. This week, the administration plans to order federal agencies to disregard climate change in their evaluations of major projects such as pipeline construction.

The latest preparedness report, released in December with little notice, was assailed yesterday by climate advocates whom E&E News contacted.

"It is inexplicable to me that climate change would be left out of this report," said Rep. Yvette Clarke (D-N.Y.), who is the prime sponsor of a bill that would require FEMA to address climate change.

Excluding climate change from the report endangers the country, said Rachel Cleetus, a climate expert at the Union of Concerned Scientists’ advocacy group.

"We can’t prepare the country — we can’t prepare communities — if we take this deliberately politicized route of excluding any mention of climate change," Cleetus said. "This sort of an approach is going to leave communities dangerously ill-prepared."

FEMA leads federal efforts to prepare for and recover from disasters. Agency leaders under President Trump repeatedly have avoided saying in public whether they believe human activities are causing climate change — a position that has drawn ridicule.

"You can strip the words out of a report, but you can’t change the reality. Climate change is already affecting things like worsening wildfires, increased flooding, a whole range of events," Cleetus said. "The science is there, and the science can help guide our preparedness efforts. Let’s start using that science to identify communities and people who are vulnerable."

Asked about excluding "climate change" from the report, a FEMA spokesperson told E&E News, "Regardless of why the climate is changing, emergency managers have to be poised to respond to disasters and support preparedness efforts nationwide."

National preparedness reports, which Congress requires annually, aim to guide federal, state and local officials, as well as private and nonprofit entities, in addressing major threats by describing the nation’s vulnerabilities and its progress in addressing them.

The reports were first issued under the Obama administration, which used them to raise warnings about climate change and to urge federal agencies to minimize the damage from extreme storms, heat waves and droughts.

The Obama administration’s final report, published in March 2016, says climate change leads to the increased wreckage of public facilities, contributes to the spread of disease, and exacerbates poverty and political instability by destroying food supplies. The report also warns extensively about damage caused by drought and sea-level rise.

The Trump administration has taken a much different approach.

Its first National Preparedness Report, released in August 2017, said nothing about the threat of climate change and uses the term only a handful of times to describe the work of federal agencies. The report repeatedly warns about the threat of drought and sea-level rise.

The 2018 report removed almost all references to climate and sea-level rise, and mentioned drought only to describe federal disaster aid programs.

Although the 2019 report removes all three terms, it discusses the ongoing damage from floods, wildfires and hurricanes, including Hurricanes Florence and Michael in 2018, which each caused $25 billion in damages. The report criticizes some states for having "outdated building codes" that leave new construction vulnerable to disasters, and some businesses and people for having inadequate property insurance.

"We are convinced that enforced strong building codes, smart land-use planning, and community and private-sector mitigation investments will change the risk profile of communities and reduce the cost of disasters," a FEMA spokesperson said. "Most importantly, building standards leads to less of an impact on survivors."

Federal agencies such as NASA have continued to warn about climate change and its effect on extreme events. The government’s National Climate Assessment, released in late 2018, says climate change is causing "more frequent and intense extreme weather" and will "continue to damage infrastructure, ecosystems and social systems."