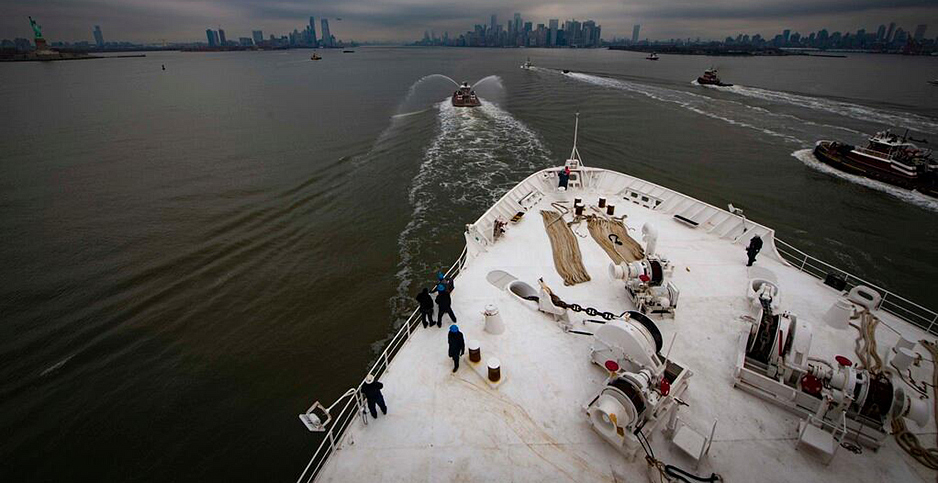 The naval hospital ship Comfort arrived in New York this week. The Federal Emergency Management Agency is overseeing the nation's response to the coronavirus. Sara Eshleman/Navy/FEMA

The Federal Emergency Management Agency has ordered dozens of agencies to respond to the novel coronavirus crisis by doing everything from building emergency medical facilities to providing security as it spearheads the federal fight against the pandemic.

Since last month, when President Trump put FEMA in charge of the national response, the agency has made nearly unprecedented use of a law that empowers it to order federal agencies to perform any function during an emergency or a disaster.

FEMA’s orders — known as "mission assignments" — have mostly involved directing the Pentagon and the Army Corps of Engineers to build medical facilities in areas hit hard by the pandemic such as New York City.

On Monday, the Pentagon said it was complying with a FEMA order to send a mortuary affairs team to New York, which has experienced more COVID-19 fatalities than any other state.

FEMA also has enlisted help from obscure agencies such as the Bureau of Indian Affairs, Occupational Safety and Health Administration, Federal Protective Service, and Cybersecurity and Infrastructure Security Agency. Many of the smaller agencies are helping with the pandemic by assigning personnel to FEMA’s emergency operations center.

"The president through FEMA can direct any agency to carry out any mission within its authorities," former FEMA Deputy Administrator Timothy Manning said in an interview. "That’s the only way you can coordinate something as large as the fed government in support of governors and the public."

FEMA’s authority is activated when a president declares an event a "major disaster" or an "emergency." Trump declared the COVID-19 pandemic a national emergency on March 13.

The Army Corps said on Twitter yesterday that because of FEMA assignments, it has more than 15,000 of its 37,000 employees helping "both on site and virtually," including transforming the Jacob K. Javits Convention Center in Manhattan into a makeshift hospital with nearly 3,000 beds.

The $350 million conversion of the Javits Center is one of the costliest assignments FEMA has ever issued, agency records show.

FEMA orders will cost about $1.1 billion, the Army Corps said, making them among the most expensive sets of mission assignments in FEMA history. The Army Corps is eligible to be reimbursed, though federal law says FEMA can order agencies to perform emergency work "with or without reimbursement."

The Army Corps has received the most FEMA orders by far related to COVID-19, according to records the agency gave to E&E News. FEMA also has issued a significant number of orders to the departments of Health and Human Services and Veterans Affairs.

FEMA has increasingly used mission assignments in recent years to force agencies to help with catastrophic disasters such as Hurricane Maria in Puerto Rico, Hurricane Harvey in Texas and deadly California wildfires in 2017.

FEMA issued $1.7 billion in orders after Hurricane Irma hit Florida and the U.S. Virgin Islands in 2017.

The agency’s orders for the COVID-19 response have already surpassed Irma and amount to nearly $2 billion.