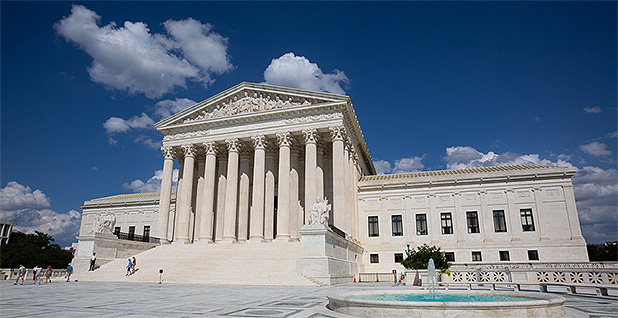 The independent agency issued a declaratory order that contradicts a ruling last fall by the 3rd U.S. Circuit Court of Appeals. That court had found the company’s use of eminent domain to condemn land in the pipeline’s path through New Jersey violated the state’s "sovereign immunity" under the 11th Amendment of the Constitution (Energywire, Nov. 15, 2019).

PennEast, which had sought FERC’s guidance on the matter, is set to file a petition to the Supreme Court by March 4 to overrule the 3rd Circuit ruling, after being granted a filing extension on Monday by the Supreme Court.

The agency’s action sharply divided the commissioners over whether FERC should have weighed in on a case involving constitutional questions.

"If the Supreme Court wants our opinion, they’ll ask for it," Democratic FERC Commissioner Richard Glick said in an open meeting on the order.

"It’s irresponsible for this commission to use its declaratory order process to attempt to help a private litigant to persuade the Supreme Court to review and strike down an appellate decision on a constitutional matter," said Glick.

FERC Chairman Neil Chatterjee and Commissioner Bernard McNamee, both Republicans, defended the agency’s decision to respond to PennEast’s request for a declaratory order following the 3rd Circuit decision. Chatterjee said FERC was providing "much-needed clarity" on how eminent domain could be used under the Natural Gas Act before PennEast files its petition to the Supreme Court to overturn the appellate court decision.

Chatterjee said the agency had the authority to interpret a statute it administers through a declaratory order.

"The commission finds that the text, legislative history and precedent regarding NGA Section 7(h) all demonstrate Congress’ intent to delegate the authority to condemn state property to certificate holders," Chatterjee said.

He added that the agency had declined to touch any issues related to the sovereign immunity under the 11th Amendment.

"In agreeing with PennEast, the Commission reiterated that vital infrastructure should not be disrupted by parochial interests after having been found by expert federal regulators to be in the broad public interest and environmentally safe," she said in an email.

She noted that the 3rd Circuit decision would have "far-reaching national implications" for all interstate energy projects.

In his dissent, Glick warned against the agency acting beyond its authority and engaging in "ends-oriented reasoning."

"I find Glick’s argument astonishing," said James Lucier, managing director of Capital Alpha Partners LLC. He pointed out that FERC had been approving projects that used eminent domain for decades.

"This is about FERC’s institutional authority administering the Natural Gas Act," he said. "This statute has been around since 1948 — why has no one identified this problem before?"

Legal experts said the agency had attempted to walk a narrow line of addressing sovereign immunity without raising constitutional questions — and hadn’t quite managed it.

"The idea that FERC is going to issue its opinion on a constitutional matter is absurd," he said.

Bookbinder pushed back on industry concerns that the ruling would be "serious trouble for pipelines," saying very few states were opposed to pipelines.

Avi Zevin, a senior attorney at New York University’s Institute for Policy Integrity, said the 11th Amendment and eminent domain issues are "tied up together" in the 3rd Circuit ruling.

"So this is to me where FERC’s claim that it isn’t wading into constitutional issues falls apart," he said. "You can’t say you have an opinion on one without an opinion on the other."

While the commission suggested it should get deference from the Supreme Court, Zevin noted that courts typically give deference to an agency when a legal statute is ambiguous. In this case, the commissioners were arguing the statute clearly supported the use of eminent domain on state-owned lands.

Carolyn Elefant, a former FERC attorney, said the agency could have a strong argument that the eminent domain did apply to state lands. She pointed to the context of when the statute was passed: At the time, states as well as railroads and coal companies were opposing pipeline construction.

"I think there is a strong argument for this power to be preemptive across the board. It was states that didn’t want this to go through," she said.

At the same time, she said it seemed as if the agency is seeking to pick and choose the kind of constitutional questions it wants to answer.

"It’s hypocritical," she said. "I have to say I practiced at FERC for a long time. I often disagreed with policy decisions, but I’ve never seen it as partisan as this. This is just really brazen."