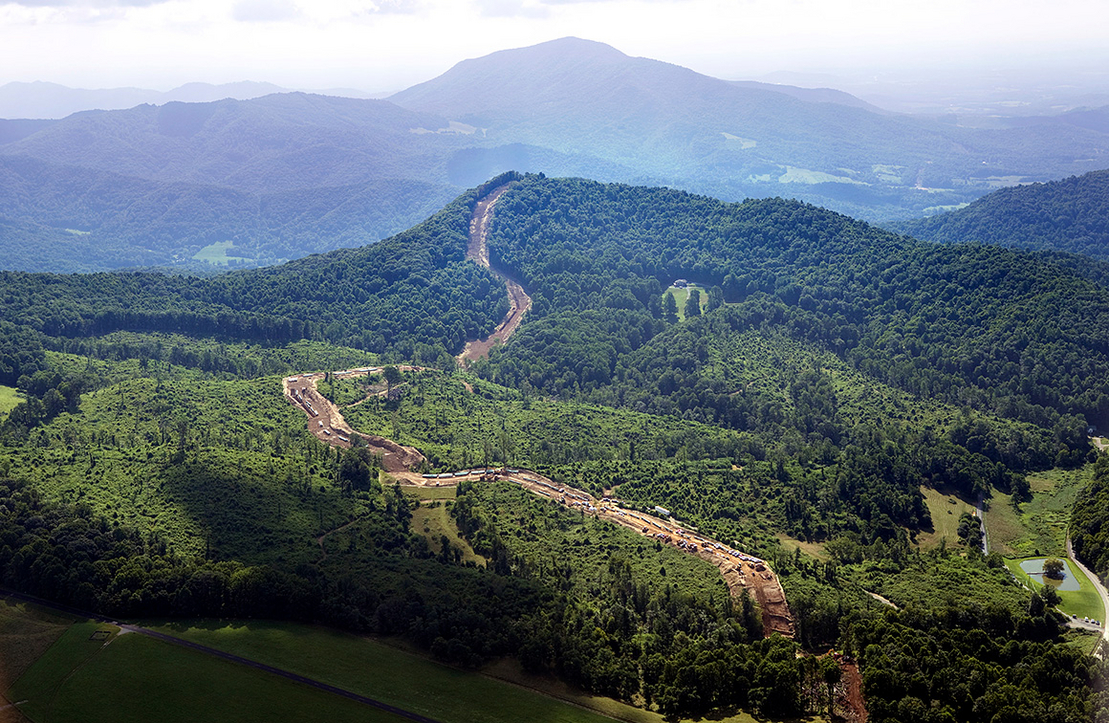 Cahas Mountain in Virginia looms over the path of the Mountain Valley pipeline in 2018. Heather Rousseau/The Roanoke Times via AP

Following a string of permit setbacks, federal regulators have approved the Mountain Valley pipeline’s request to change the crossing method for about 180 bodies of water and wetlands, a decision quickly panned by project opponents.

The Federal Energy Regulatory Commission, in an order issued Friday, amended the pipeline’s 2017 certificate to allow developers to bore under some bodies of water instead of using an open-cut method as originally approved.

“Mountain Valley’s usage of trenchless waterbody crossings will result in fewer environmental impacts than the crossing method that the Commission approved under the original certificate, meaning that today’s order amending Mountain Valley’s certificate will almost certainly represent an improvement over the status quo,” FERC Chair Richard Glick said in a statement with Commissioner Allison Clements.

The commission’s order was cheered as good news by the developers of Mountain Valley, who filed an application in February 2021 to amend the pipeline’s certificate.

According to an environmental assessment from August 2021, prepared by FERC, Mountain Valley said “the reason for the change in crossing method, the alignment shift, and the route adjustment is to avoid certain waters of the U.S.”

The pipeline is designed to transport natural gas 304 miles from West Virginia to southern Virginia. Although developers say total project work for Mountain Valley is more than 90 percent finished, opponents dispute that percentage and assert that the project should go the same way as the Atlantic Coast pipeline project, which was canceled in July 2020 by Dominion Energy Inc. and Duke Energy Corp.

“This is another important step forward in [the Mountain Valley pipeline]’s project completion and, as a critical infrastructure project, is essential for our nation’s energy security, reliability, and ability to transition to a lower-carbon future,” said Natalie Cox, a spokesperson for the pipeline, in a statement.

Glick and Clements said Friday’s order doesn’t authorize any change in the project’s route or affect any new landowners.

That helps to “mitigate our longstanding concerns over the prospect of private property being condemned long before construction begins on a project that may never be fully approved,” said Glick and Clements, both Democrats.

FERC’s order on Friday said the decision does not change the commission’s prior findings on the need for the pipeline.

The order notes that “any notice to proceed with construction” on the amended project “will only be issued upon Mountain Valley’s receipt of its outstanding federal authorizations.”

The pipeline, approved by FERC in October 2017, ​has had multiple federal approvals stuck down in court in recent months, including from the Fish and Wildlife Service, Forest Service, and Bureau of Land Management (Energywire, April 8).

Last week, before the U.S. Court of Appeals for the District of Columbia Circuit, FERC ​was pressed by judges about the agency’s decision in 2020 to give Mountain Valley developers another two years to finish the project.

At the hearing, a judge said it was “troubling” that FERC had not responded to a pending stop work order requested by environmental groups in February.

Mountain Valley sought to have the project in service by this summer, but is reevaluating that target. Equitrans Midstream Corp., one of the companies behind the pipeline, said in February that it “is not able to provide an update regarding the in-service timing and overall cost for the project” (Energywire, Feb. 22).

“We continue to evaluate the best path forward for completing the MVP project and expect to provide updated project guidance once the full evaluation is complete,” said Cox, the Mountain Valley spokesperson, in an email over the weekend.

In a note to clients on Saturday, analysts at ClearView Energy Partners LLC said they saw FERC’s order as “particularly constructive for MVP’s prospects for completing the project.”

“If a similar stance is adopted by other federal agencies, we think that the project could be in service by mid-2023, the early end of the range we had been eyeing for its completion,” the note to clients said.

ClearView’s note also said Mountain Valley’s activities “appear limited to site stabilization” and that developers would need to meet the conditions of the order to undertake new construction.

Jessica Sims, a Virginia field coordinator with the group Appalachian Voices, said in an interview that FERC’s order “brings the project — which continues to be unnecessary and destructive — no closer to completion. [Developers] are still in a holding pattern.”

And David Sligh, conservation director at Wild Virginia, said while boring under bodies of water may well cause less damage to surface waters “than cutting and blasting through them, there are still serious threats that must be acknowledged and completely assessed in each location.”

“From the beginning both [Mountain Valley] promoters and the agencies blithely said boring was not a practicable alternative in almost all cases,” Sligh said in an email. “Now though, they say it’s the best choice in these 180 places because [Mountain Valley] lost its permit from the Corps of Engineers. This choice is based on expediency, not on a reasoned alternatives analysis.”

Mountain Valley is a “strategically important project for the energy and national security of our country and will play a critical role in our ability to support our European allies as they eliminate their use of Russian energy,” Manchin said in a tweet.

“Unfortunately, there are still several additional steps that need to be taken by the [Biden] Administration to get this critical project — which would put an additional two billion cubic feet of natural gas [per day] into the market within a matter of months — complete,” Manchin added.

Cox, the Mountain Valley spokesperson, said last week that the project “was designed to transport 2 Bcf/day of domestic natural gas into regional and national supply markets.” She said its capacity “remains fully subscribed under firm contracts.”

Manchin’s statement did not delineate specific steps to be taken. In a statement last week, a spokesperson for Manchin said getting more gas online in the United States “would enable greater amounts of U.S. LNG to be exported to support our allies.”

The White House did not respond to a request for comment this weekend about whether Biden supports the completion of Mountain Valley.