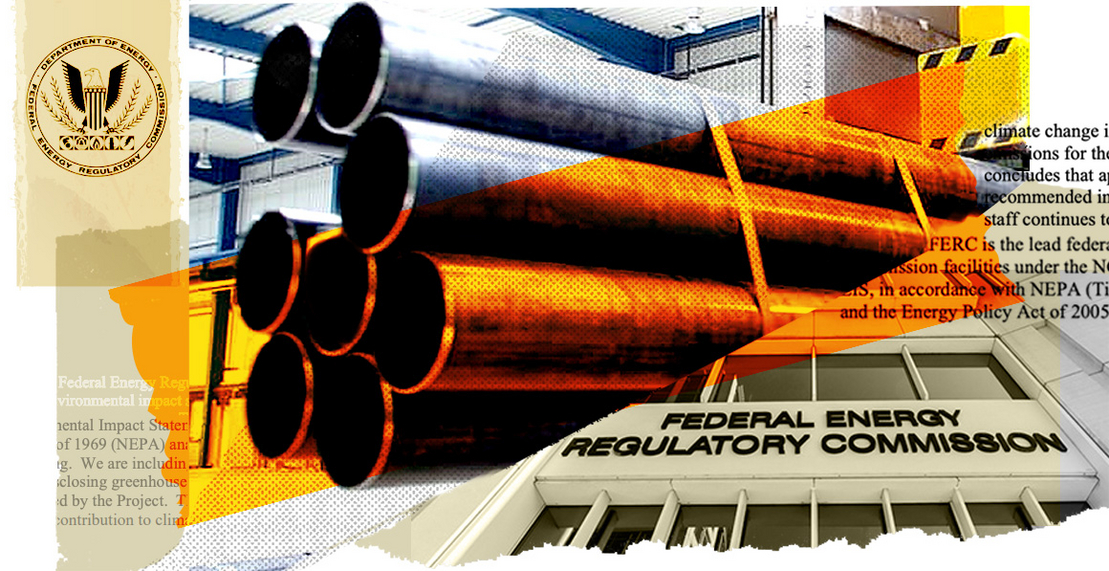 The Federal Energy Regulatory Commission took an unprecedented step earlier this year by assessing a proposed natural gas pipeline’s contribution to climate change for the first time ever.

But some FERC experts and environmental advocates say they’re concerned that the agency lacks clear criteria for analyzing the greenhouse gas emissions of other gas projects — a gap they say raises legal questions and weakens a process critical to determining whether large amounts of U.S. fossil fuel infrastructure are approved and built.

In March, FERC released an order detailing its new process for greenhouse gas reviews, before ultimately approving the gas project undergoing the first-of-a-kind climate analysis (Energywire, March 19). Under FERC’s framework, greenhouse gas assessments will be done for energy projects when a proposal could have “arguably significant” impacts, according to the agency.

“In future proceedings, the evidence on which the Commission relies to assess significance may evolve as the Commission becomes more familiar with the exercise,” the majority of commissioners wrote in the order, issued March 22.

However, FERC hasn’t yet established a methodology for analyzing a project’s climate-warming emissions, according to environmental impact statements put out by the independent agency this month and last. In the six draft environmental impact statements FERC issued for pending natural gas projects this year, agency staff concluded that it could not determine whether their emissions would be unacceptably high, citing the lack of an agreed-upon standard.

They also could not “find an established threshold” for determining the importance of the projects’ emissions relative to state and federal greenhouse gas emissions reduction targets, according to the draft statements.

“We are unable to come to a significance determination regarding the Project’s impacts on climate change. However, we acknowledge the Project would increase the atmospheric concentration of GHGs, in combination with past and future emissions from all other sources and would contribute to climate change,” the agency wrote in a draft statement issued this month for Kinder Morgan Inc.’s Evangeline Pass Expansion Project.

While FERC’s new climate reviews are useful and a step in the right direction, failing to determine the significance of a project’s emissions could open the door to more lawsuits, said Max Sarinsky, a senior attorney at the Institute for Policy Integrity at NYU School of Law. During oral arguments for two recent legal challenges to FERC’s approval of natural gas projects, the U.S. Court of Appeals for the District of Columbia Circuit rebuked the commission for not adequately considering projects’ climate risks (Energywire, Feb. 16).

“The bigger question is, what do you do now that you know what these emissions are? How is that going to affect your decisionmaking process?” Sarinsky said. “So far, FERC hasn’t shown that it will.”

As long as the commission declines to assess whether a project would have a significant effect on the climate, it’s “not actually doing an evaluation” of projects’ climate change impacts, said Maya van Rossum, leader of the Delaware Riverkeeper Network, a regional environmental group.

The agency declined to comment on whether it intended to develop a methodology for determining the importance of projects’ greenhouse gas emissions, citing an ongoing review of the six proposed natural gas projects.

At the time, FERC Chairman Richard Glick, a Democrat, said the agency could use an “eyeball test” with Northern Natural’s project to determine whether its emissions were significant, since it was replacing old piping (Energywire, April 13). In addition, the commission indicated that moving forward, it would try to compare a project’s greenhouse gas emissions with states’ emissions reduction targets, if applicable, according to the order.

Glick has also said that findings on the significance of projects’ greenhouse gas emissions are something the commissioners themselves should do, rather than agency staff, said Christi Tezak, managing director of research at ClearView Energy Partners. So far, however, it’s not clear how they will do that, particularly in cases where a new project would clearly increase emissions — rather than projects that are largely replacing existing infrastructure, such as in the Northern Natural case, Tezak said.

“To date, I don’t believe any FERC commissioner has suggested that FERC is an environmental regulator, and even Glick has stated it is not, so how does FERC do it on its own?” Tezak said in an email.

Although the agency has not been issuing significance findings for greenhouse gases in its environmental impact statements, some environmental advocates are defending FERC, saying they are encouraged by the mere acknowledgment that individual natural gas projects would contribute to climate change.

While FERC has taken an “incremental approach” in beginning to conduct climate assessments, the commission’s analysis of projects’ contributions to climate change still constitutes a notable shift, said Gillian Giannetti, an attorney at the Natural Resources Defense Council’s Sustainable FERC Project. As recently as December, the commission’s official stance was that it could not assess a project’s climate significance at all, Giannetti said.

FERC’s official position now is a “monumental change in perspective,” she said in an email.

Furthermore, it could be difficult for commissioners to reach a consensus on a more robust methodology at this time given the commission’s political makeup, she said. There are three Republicans and two Democrats on the commission, although Republican Commissioner Neil Chatterjee is expected to step down in the next month or two.

For now, the commission’s estimates of greenhouse gas emissions have galvanized activists opposed to one pending natural gas project.

As of last week, more than 50 comments had been submitted to FERC from critics of a proposed expansion project from Iroquois Gas that was subject to a greenhouse gas analysis. Many commenters urged the commission to reject the plan based on the commission’s own acknowledgment that it would contribute to climate change. According to the draft environmental impact statement, the proposal — which would expand four compressor stations in New York and Connecticut — would release an additional 164,140 metric tons of carbon dioxide equivalent per year, which is equivalent to the annual emissions of about 35,697 passenger cars.

Iroquois Gas’ expansion project would increase natural gas deliveries to New York City, helping to “alleviate the need for gas moratoriums and benefit economic development,” Iroquois Gas said on its website. It would also support intermittent renewable energy resources in New York, complement carbon-free initiatives in Connecticut, and lead to a “reduction in life cycle GHG emissions and air pollution,” the website states. Iroquois Gas did not respond to requests for comment.

Still, the fact that FERC acknowledged that the project would contribute to climate change should be grounds enough for rejecting the plan, said Samantha Dynowski, state director of the Sierra Club’s Connecticut chapter.

“Regardless of the methodology [FERC] is using, whether they’ve agreed on it or not, given that we’re in the midst of a planetwide climate emergency, a project that’s going to contribute to climate change is deeply concerning,” Dynowski said.

The natural gas industry is also watching FERC’s greenhouse gas emissions assessments closely. The American Gas Association, which represents natural gas utilities and producers, has intervened or requested to intervene in all six proceedings that have been subject to the new climate analyses.

The organization has not taken a position on the proposals, but it has “overarching concerns” with FERC’s actions in those cases, a spokesperson for the group said in an email. First, the commission “may be making policy changes in individual cases” even though FERC has not finalized a potential new policy for approving new natural gas pipelines in a separate, ongoing proceeding, AGA said.

“Second, AGA is concerned about delays in FERC’s review of projects because gas utilities need pipeline capacity in order to serve customers,” the organization said.

Some of the projects had undergone environmental assessments without climate considerations when the commission instituted its new process for reviewing greenhouse gas emissions. FERC issued supplemental statements for those projects because they could have “arguably significant” environmental impacts and a significance finding could not “be answered confidently one way or another with the present record,” the agency said.

For Sarinsky, even though the commission solved a “very narrow problem” with the supplemental reviews, it continues to miss the big picture. “It would not surprise me if what they’re doing continues to be challenged,” he said.

Correction: A previous version of this story incorrectly described the current makeup of FERC commissioners.