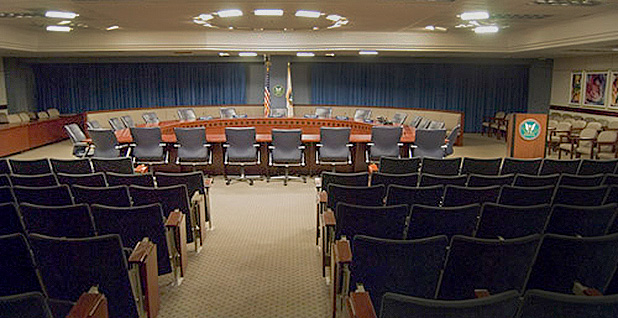 The Federal Energy Regulatory Commission has eliminated its Division of Energy Market Oversight (DEMO), which is part of the agency’s enforcement branch and oversees the nation’s natural gas and electric power markets and related energy and financial markets.

The previously unreported move, confirmed by FERC on Friday, will be formally announced by Chairman Neil Chatterjee at the agency’s meeting Thursday. Effective today, DEMO’s functions will be delegated to other FERC offices.

The action prompted one critic to call for congressional involvement, considering DEMO’s impact on policing markets for manipulation.

Tyson Slocum, director of Public Citizen’s Energy Program, said, "This type of significant agency reorganization … should involve a briefing for Congress to explain its impact, at a minimum."

DEMO is one of four divisions in the Office of Enforcement in place since at least 2006, according to an archived organizational chart at the agency. Its roughly 40 employees also conduct daily oversight of those markets and report their findings and recommendations to the commission and the public.

FERC spokeswoman Mary O’Driscoll said the agency’s goal was to realign "some of the functions now within the Office of Enforcement and move them to other FERC offices to better reflect the key functions and mission statements of the Commission’s offices and improve organizational efficiency."

Policy-related functions now in the Office of Enforcement that are more closely aligned with the mission of the Office of Energy Policy and Innovation (OEPI) will be transferred there, FERC said.

The move involves employees of two DEMO branches who are responsible for completing summer and winter assessments, the annual State of the Markets analysis, and other reports examining broad market trends.

FERC’s compliance and market surveillance functions will stay at the enforcement office.

Monitoring and analysis of market power — which covers traders with significant, price-moving footprints in energy markets — will move to the Division of Analytics and Surveillance, FERC said.

DEMO employees administering and performing compliance functions related to the Electric Quarterly Reports and market financial forms will move to the Office of Enforcement’s Division of Audits and Accounting.

"The reorganization in no way impacts resources needed to address market oversight and compliance activities executed by the Office of Enforcement," FERC said.

That office will have "sufficient resources to execute comprehensive oversight and compliance activities on behalf of the Commission," O’Driscoll said.

The ‘cop on the beat’

Changes to FERC’s oversight of market manipulation could also rile some lawmakers on Capitol Hill.

Last week, Sen. Maria Cantwell (D-Wash.) questioned whether FERC was taking seriously its market manipulation duties, citing reports that the Office of Enforcement may be shying away from pursuing some violations, as well as a recent change in public disclosure requirements online.

"I believe one of the most important things is that cop on the beat looking at who is out in the marketplace and what they might be doing," Cantwell said. "And clearly, we want to make sure that those types of enforcement provisions are being used."

FERC maintained that the enforcement measures are continuing as normal.

"It is my understanding that the Office of Enforcement is executing its responsibilities in a comprehensive way," FERC Executive Director Anton Porter said in response to Cantwell.

Outside of the staffing organization, FERC’s Thursday meeting has a packed agenda, with policy changes to the commission’s interpretation of the Public Utility Regulatory Policies Act (PURPA) likely representing the most significant action on its plate.

The meeting marks the first for Republican control of the commission in nearly a year.

The PURPA change, marked on the agenda as "Qualifying Facility Rates and Requirements Implementation Issues Under the Public Utility Regulatory Policies Act of 1978," is likely to include a combination of rates and siting requirement alterations that have been priorities for Chatterjee for much of his tenure.

"It’s a somewhat wonky topic, but to me, the core question is pretty simple: Can we at FERC better harness market forces?" Chatterjee said last week at a National Coal Council event in Washington, D.C. "I am committed to doing what I can to bring FERC’s policies under PURPA into the modern era."

Critics have raised concerns that the law has been prone to abuse by requiring utilities and their customers to purchase power even if the electricity is not needed to meet demand. Those concerns extend to the so-called 1-mile rule, which generally directs operators to keep generating facilities at least a mile away from each other.

The exact changes planned for those areas are not yet known, but Chatterjee has offered previews of his priorities.

"To me, the key questions are: How can we introduce more flexibility and market-driven pricing, and how can we continue to meet our legislative mandates while also protecting customers and competition?" he said last week.

The agenda lists a pair of certificate approvals related to Tallgrass Energy’s 1,679-mile long Rockies Express pipeline stretching from Wyoming to Indiana. The two certificates would enable the Cheyenne Connector Project — 70 additional miles of pipeline in Colorado slated to be added to Tallgrass’ network — to go forward.

A sixth liquefied natural gas export terminal could also be approved this year as Republicans look to continue progress on a Trump administration priority to expand the U.S. capacity for LNG exports.

The final item on the agenda is a certificate for the Jacksonville Project, proposed by Eagle LNG Partners Jacksonville LLC.

The project has been dubbed a small-scale LNG export facility, with exports targeted for the Caribbean and other international markets.