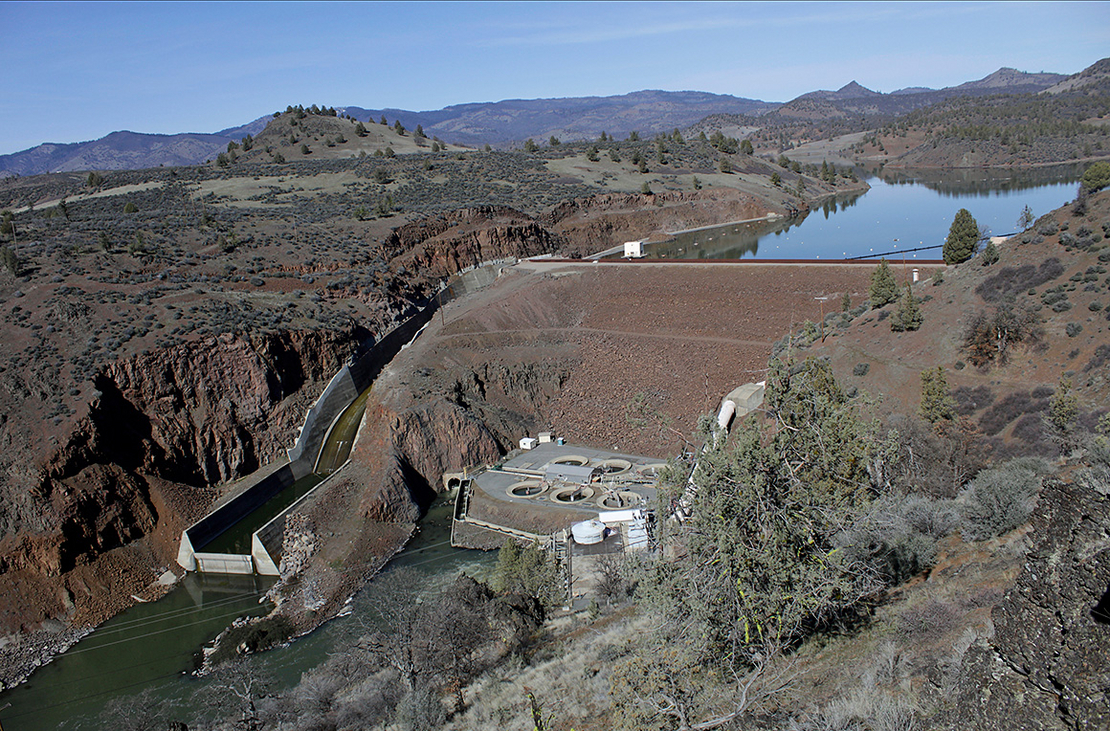 Following decades of dispute and review, more than 400 miles of the Klamath River could soon return to a free-flowing state as the nation’s largest dam removal project takes a step forward.

The Federal Energy Regulatory Commission on Friday released its draft environmental impact statement on the removal of four hydroelectric dams — rising a combined total of 411 feet high — known as the Lower Klamath Project.

“After taking mitigation into account, the project would have some significant adverse effects, but would provide many significant benefits including the protection and restoration of anadromous fisheries that are of vital importance to the Tribes,” FERC wrote.

Proponents of removing the dams argue that freeing the river will improve the health of species, including salmon, steelhead and lamprey, both by reopening spawning habitat upstream and by reducing water temperatures that contributed to disease in the fish. The dams have likewise contributed to toxic blue-green algae blooms in the region.

They praised FERC’s recommendation to move ahead with the project, which would also draw down four reservoirs and restore affected lands.

“Once again, a thorough analysis by experts reveals dam removal as key for restoring Klamath fisheries and improving water quality” Yurok Tribal Council Vice Chairman Frankie Myers said in a statement. “Our culture and our fisheries are hanging in the balance. We are ready to start work on dam removal this year.”

Removal of the four sites, including the J.C. Boyle, Copco No. 1., Copco No. 2 and Iron Gate dams, would restore the river’s free flow from southern Oregon to Northern California and then the Pacific Ocean over a 20-month period.

“The dam removal plan will create a man-made natural disaster that will cost billions to clean up,” LaMalfa warned in August.

In a statement to E&E News today, LaMalfa reiterated his concerns.

“By removing the lower dams, citizens can expect higher electricity rates, insufficient water storage capacity for drinking water and lack of resources in the event of a fire,” he said. “Destroying these clean hydroelectric dams is a terrible idea. Sediment from behind the dams will destroy spawning habitat for years to come and cause the extinction of the only successfully breeding sucker fish population. The loss of water and power will have huge negative effects of the people of Siskiyou County. I remain steadfastly opposed to this moronic plan.”

Discussions about removing the dams, which currently generate a combined 686,000 megawatt-hours annually, date to the early 1990s.

Although the Klamath Hydroelectric Settlement Agreement was finalized in 2010 — signed by nearly 50 partners, including dam operator PacifiCorp, the Interior Department and the Forest Service, as well as the states of Oregon and California and the Karuk, Klamath and Yurok tribes — Congress failed to approve legislation by a 2016 deadline, which delayed the project’s progress (E&E News PM, Feb. 18, 2010).

An amended agreement was signed in 2016, creating the nonprofit Klamath River Renewal Corp. to take ownership of the dams and pursue their removal.

While KRRC did not immediately comment on the details of the draft EIS, the nonprofit did praise FERC for endorsing its request to decommission the dams, including the “license surrender” request submitted by the nonprofit, California and Oregon.

“KRRC appreciates FERC’s thorough and timely review of the project impacts, and continues to focus efforts on obtaining all the necessary regulatory approvals, including a final EIS and a License Surrender Order, to commence the largest dam removal and river restoration effort in U.S. history,” the organization said in a statement.

Public comment on the draft EIS is open until April 18.