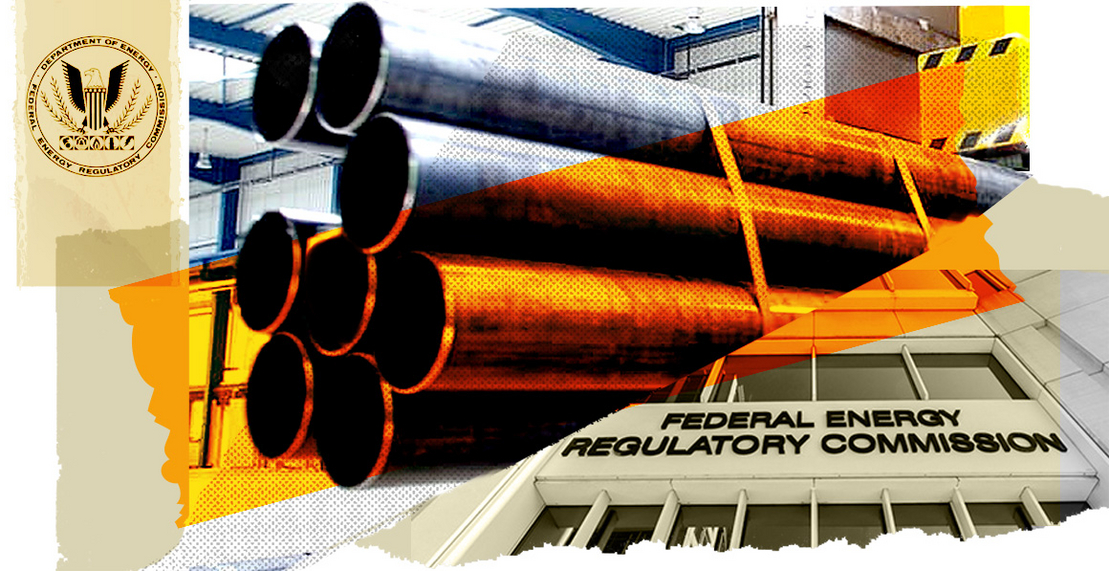 Last year, the head of the Federal Energy Regulatory Commission delivered a message to the energy industry: “The cop is back on the street.”

The uptick in cases includes a new focus on energy infrastructure, including the country’s pipelines — and how companies handle their construction and operation. The bottom line, Glick said, is that pipeline companies must abide by the conditions in the permits that FERC issues.

“The message is you’ve got to live up to your commitments,” Glick told reporters in December. “If you don’t do that, we’re going to come down on you, because that’s our role.”

But as the agency seeks to penalize pipelines for permit violations — including pursuing record-setting fines — developers are hitting back with legal challenges that, if successful, could chip away at the commission’s enforcement powers. That in turn could make it more difficult to penalize companies for spills, groundwater contamination and failure to restore the land they trench through to build the lines.

Since Congress boosted FERC’s enforcement authority in 2005, the Office of Enforcement has not typically gone after pipeline violations, focusing more on wrongdoing in energy and power markets. But that has recently begun to change, some legal experts said.

Glick’s leadership has undoubtedly spurred FERC to increase oversight on pipelines, said Carolyn Elefant, a former FERC attorney who now represents landowners affected by pipelines. Before the Democrat was tapped by President Joe Biden to serve as FERC chair last January, “pipeline stuff was completely below the radar,” she said.

Now, FERC is accusing two multibillion-dollar pipeline developers of failing to abide by the conditions and standards they agreed to when they were granted permits. In one case, the enforcement office is proposing its biggest-ever fines in a pipeline construction case.

Increased enforcement from FERC may send a message to the natural gas industry that the agency is prepared to hold developers accountable for the terms and conditions included in their permits, said Carrie Mobley, an associate at the law firm McGuireWoods LLP.

“We’ve seen a lot of interest that maybe wasn’t previously taken in pipeline cases,” Mobley said. “[The cases] are indicating that the commission is interested in ensuring compliance and is willing to be a little bit creative in their approach.”

Whether the trend will last, however, is unclear. Some companies are going beyond defending themselves to filing lawsuits that challenge FERC’s enforcement process itself.

Their cases may have gotten a boost last week when the 5th U.S. Circuit Court of Appeals found that the in-house enforcement system used by the Securities and Exchange Commission is unfair. FERC’s system, using administrative law judges (ALJs) to hear cases, is similar to that of the SEC.

Glick told reporters last week that the commission was aware of the appellate decision but was unsure how it would affect FERC.

“It’s not immediately clear if the 5th Circuit order is applicable to our ALJ proceedings, but it is something we’re taking seriously, and we’re reviewing the decision in detail,” he said.

In 2016, Energy Transfer LP outraged FERC officials when it tore down an Ohio farmhouse near a planned compressor station for its Rover natural gas pipeline. Built in 1843, the house was considered eligible for listing on the National Register of Historic Places, and the company had told FERC it would try to ensure “no adverse effects” on the house.

Then, in 2017, Rover crews spewed about 2 million gallons of fluid, called “drilling mud,” into a wetland next to a river. State and federal officials later found that contract employees had been injecting diesel fuel into the fluid, a trick to speed up drilling.

Last year, FERC sought $60 million in fines from Energy Transfer for the alleged violations. The first fine of $20 million was for tearing down the house. Months later, FERC proposed a $40 million fine for the spill of diesel-tainted fluid, the largest-ever for a natural gas pipeline (Energywire, March 24).

FERC accused the company of essentially lying about its plans to demolish the house. Energy Transfer contends that the house was of little historical value, and after buying it, the company realized it wouldn’t work as an office.

As for the drilling mud incident, FERC said a company culture “that favored speed” in the construction process created the conditions that led to the spill. Energy Transfer has said it cannot be blamed for wrongdoing by a contractor’s “rogue employee.”

In both cases, Energy Transfer has also challenged the FERC enforcement process.

In February, it sued the commission in federal court in Dallas, where it’s based. It argued that the alleged violations from the demolished house cannot be handled within FERC, but must be filed in federal court, where the agency would have to prove its case. After the 5th Circuit ruled against the SEC last week, Energy Transfer quickly filed a brief, arguing that the decision bolstered its Dallas case.

FERC’s process is unfair, according to the company, because it is a circle: The agency’s commission authorizes investigations by enforcement staff, who then argue before an agency administrative judge, who makes a recommendation to the five commissioners.

“From the start of FERC’s agency proceedings, it affords its Enforcement Staff a home court advantage,” Energy Transfer told the trial court in February.

If FERC had to go to court — rather than an in-house commission — to prove violations, “that would be a big problem,” Elefant said. “There has to be some sort of administrative process. I think a court is going to be very uncomfortable stripping away an agency’s power.”

Under FERC’s rules of practice and procedures, the commission may order administrative law judges to conduct settlement negotiations, according to the agency. The commissioners have dismissed the notion that its hearing process is unfair or biased, including in an order issued in January.

“Chairman Glick continues to prioritize vigorous oversight and enforcement of jurisdictional markets and projects,” a FERC spokesperson said in a statement.

In the $40 million spill case, the company has argued it cannot be held liable because its contractor was to blame.

“Enforcement Staff’s theory that certificate holders should be strictly liable for the intentional misconduct of an independent subcontractor’s employee is unprecedented,” the company’s attorneys wrote in a filing to the agency this month.

Typically, most of the people working on pipeline construction projects are contractors. Observers say if the commission can’t hold companies liable for contractors’ actions, that would limit its enforcement abilities.

“The buck stops with the applicant and the [permit] holder when it comes to making sure the law is followed,” said Gillian Giannetti, an attorney at the Natural Resources Defense Council’s Sustainable FERC Project.

Energy Transfer did not respond to multiple requests for comment.

FERC has also turned up the heat on the developers of two pipelines accused of failing to fix the damage to private properties caused by their projects’ construction.

Farmers and other landowners along Cheniere Energy Inc.’s Midship pipeline in Oklahoma and Spire Energy’s Spire STL pipeline in Missouri and Illinois say their land remains a mess years after FERC allowed the companies to begin operations. Last March, the commission ordered Spire to fix soil remediation problems and other restoration issues for seven Illinois properties along the pipeline.

Both Spire and Cheniere say they’ve made good-faith efforts to address all landowner concerns and that most properties have already been restored.

“Spire STL Pipeline has remained consistent in its commitment to continue monitoring the Pipeline route and address concerns raised by landowners for the life of the asset,” Jason Merrill, director of integrated corporate communications at Spire, said in an email.

Spire’s case has not been referred to the Office of Enforcement, unlike the complaints against Energy Transfer and Cheniere. But FERC’s efforts to ensure pipelines comply with its rules may reflect an increased understanding of “bad things that can happen” during and after construction, said Giannetti of the NRDC.

“In order to give life to the conditions that FERC places on certificates, there has to be some sort of penalty for failing to adhere to them,” she said.

Built to carry gas from production areas in central Oklahoma to the Gulf Coast for export, the Midship pipeline began operations during the Trump administration. By the time Glick took over as FERC chair in January, some landowners’ complaints about damage to their farms were reaching fever pitch.

Amplifying those concerns, Rep. Jamie Raskin (D-Md.) held an Oversight subcommittee hearing in May 2021 on the treatment of landowners affected by the Midship project.

When FERC issues a pipeline permit, known as a certificate, the permit holder is granted the right to seize land via eminent domain to make way for the project, but it must first attempt to negotiate compensation with the landowner. The company is generally responsible for “ensuring successful revegetation of soils disturbed by project-related activities,” according to FERC’s “Upland Erosion Control, Revegetation and Maintenance Plan.”

In December, FERC took a series of actions. The commission sent Cheniere’s handling of land restoration to the enforcement office, and ordered the company to explain how it had not violated its permit by leaving rock and construction debris in the trench where it laid the pipeline. It sent one of the most heated disputes, allegations of damage to Sandy Creek Farms near Bradley, Okla., to an administrative law judge. And it found the company “in non-compliance” for leaving rock and debris in a farm (Energywire, Dec. 17, 2021).

Cheniere, which declined to comment for this article, has said previously it has worked extensively to address landowners’ concerns and has met the conditions of its FERC permit. Like Energy Transfer, it has taken FERC to court, saying the agency has overstepped its authority.

The company has petitioned the 5th Circuit to bar FERC’s administrative law judges from determining the cost of restoring landowners’ properties.

“Congress left the matter of liability for property damage (including any remaining restoration costs where the landowner has refused access to the property) to be resolved under state law, via state law remedies,” counsel for Midship said in a brief this month.

FERC attorneys have countered that the agency is merely exercising its statutory authority “to investigate what further remediation is necessary.” Even so, it was “unique” for FERC to initiate an ALJ proceeding to determine how to reimburse a landowner, said Mobley of McGuireWoods.

“The outcome of that court case could establish precedent [about] whether the commission can continue to take that sort of action with similar disputes,” she said.

In contrast to its actions in the Midship case, the commission has traditionally taken pipeline companies at their word when it comes to landowner disputes, said Megan Gibson, a senior staff attorney at the Niskanen Center. Gibson and other attorneys at the think tank have represented landowners in numerous proceedings before FERC.

“What’s currently happening with Midship — the investigation, the administrative law judge, everything — it almost never happens because FERC routinely ignores complaints by landowners even when presented with incontrovertible evidence that a regulated entity or pipeline is violating the terms of its own certificate,” Gibson said.