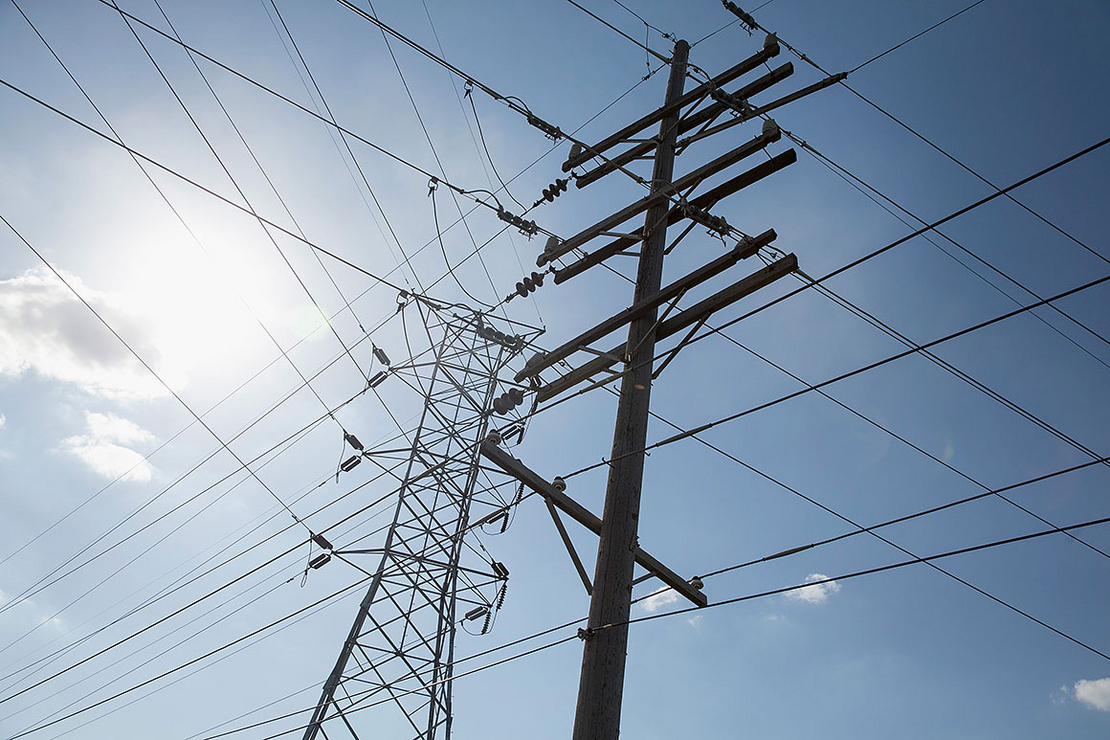 The Federal Energy Regulatory Commission is seeking comments on proposed new rules that would overhaul how the United States plans and builds power transmission infrastructure. A high-voltage electricity line is pictured in Joliet, Ill., in this May 7, 2015, photo. Scott Olson/Getty Images

The agency launched a rulemaking on high-voltage transmission planning — a topic FERC has not addressed holistically in 10 years. President Biden has called for passing a clean electricity standard that would mandate that electric utilities generate all their power from carbon-free resources by 2035, a goal some analysts say could not be achieved without a massive expansion in transmission infrastructure needed to connect far-flung wind and solar farms to hubs of electricity demand.

“The grid is the biggest constraint to large-scale renewable deployment, and FERC has the most authority of anybody to do something about it,” said Rob Gramlich, executive director of Americans for a Clean Energy Grid, a nonprofit coalition. “If they use their authority in the right way, they can make a huge impact on both the resilience of the power system, but also clean energy integration.”

Even though FERC did not announce any specific policy changes, clean energy advocates said the agency’s advance notice of proposed rulemaking issued at a monthly meeting yesterday could lead to reforms that are critical for reaching a carbon-free electric grid. FERC said it is seeking comments about how it could change or enhance existing transmission regulations to support the build-out of carbon-free resources.

Revising the current processes for building new high-voltage power lines and other forms of transmission infrastructure is a priority for Chairman Richard Glick, a Democrat, who said he hopes to proceed with the rulemaking “as expeditiously as possible.”

Aside from Republican Commissioner Neil Chatterjee, who did not participate in the vote, the commission unanimously approved the notice. Chatterjee’s official term ended June 30, and he said he will step down from his role prior to the five-member commission’s next meeting in September.

Although renewable resources command a bigger share of the U.S. power mix today than ever before, developers of solar and wind projects say they face challenges when trying to connect their projects to the wider grid. More than 750 gigawatts — a record amount — of power generation is currently sitting in so-called interconnection queues around the country, waiting for a green light to link up to the bulk power system, according to a report issued in May by the Lawrence Berkeley National Laboratory.

Once would-be generators make it through the queue, they may be charged high fees to cover the cost of transmission upgrades needed to support their projects, which clean energy groups say is another impediment to a carbon-free grid.

FERC is inviting members of the public to comment on potential changes to interconnection policies that could make it easier for solar and wind farms to come online, it said. The agency is also seeking input on whether the current method of passing the costs of transmission upgrades to generators is fair, among other topics.
“In my opinion, we need a transmission planning process that better takes into account the generation resources that are going to be built in the future,” Glick said.

The commission is also floating the idea of identifying regions where “large amounts” of renewable energy projects could be built and planning transmission development for those areas, according to the notice. Clean energy groups have proposed that concept in the past, which could help make transmission build-out more efficient and cost-effective.

Saying that the notice was the “product of compromise,” Commissioner Allison Clements, a Democrat, framed hurdles to transmission development as a threat to consumers.

“The impediments we see to smart transmission investments are harming the consumers we are tasked to protect and slowing the integration of low-cost clean resources that customers and utilities desire,” Clements said.

Commissioner James Danly, a Republican, stressed that FERC should be careful not to overstep its authority in considering new transmission planning policies, and ensure that “the ratepayers are kept in mind” throughout the process.

“I encourage everyone with an interest to file [comments], and I am very much looking forward to seeing people’s comments,” Danly said.

The advance notice was met with cautious optimism from clean energy groups, some of which have long urged FERC, the Department of Energy and other relevant agencies to help build out the grid to speed the transition away from fossil fuels.

Many observers noted the breadth of topics that seem to be included in FERC’s notice, ranging from greater regional coordination on transmission to measures that could boost oversight of project costs to protect consumers.

Past transmission-related FERC orders have generally been narrower in scope, said Larry Gasteiger, executive director of WIRES, a trade group that promotes investments in transmission.

“I can’t overstate the magnitude of the complexity of what they’re looking at taking on,” Gasteiger said.

Members of the public will have 75 days to comment and another 30 days to issue replies after the advance notice is published in the Federal Register. The commission could then proceed with a formal notice of proposed rulemaking containing more details on potential policy changes.

“The Chairman’s statements today, and the focus of the Biden Administration and Congress on transmission as a pillar of the infrastructure package, suggest this will be an item that takes top priority,” Dennis said yesterday in an email, referring to efforts to advance a $600 bipartisan infrastructure deal. “But time will tell.”

Commissioners also took action yesterday on a range of other issues, including a utility’s request for a rate incentive that has emerged as a point of contention.

The agency denied a request from Dayton Power and Light Co., a subsidiary of AES Ohio, for a benefit known as a 50-basis point adder to the utility’s return on equity. The benefit is issued to utilities that join regional transmission organizations or similar groups, but FERC in April proposed limiting its duration to three years after a utility joins the organization.

Because Ohio requires all utilities to be part of an RTO, commissioners denied Dayton Power and Light’s request in a 3-2 vote. FERC does not award the incentive to utilities unless they are voluntarily joining an RTO and aren’t already required to do so, Glick said.

Chatterjee and Danly dissented in the order, with Danly writing that the commission was wrong to deny the incentive to a utility on the basis of state requirements. Doing so violated the commission’s obligations under the Federal Power Act, he wrote in his dissent.

Chatterjee, meanwhile, argued that the commission was being unfair in issuing an order on the issue given that FERC’s related proposal from April on the 50-basis point adder is ongoing.

“Given the potential ripple effects of today’s order on other transmission owners in Ohio and beyond, I cannot support an order that denies Dayton an RTO adder while the entire RTO adder policy remains in limbo,” he said.

She said that an RTO — designed to instantaneously manage the balance of electricity generation and demand over swaths of the United States — could help ensure reliability as states from Wyoming to California grapple with the effects of climate change, including wildfires and extreme heat (Energywire, July 2).

During a FERC conference on Western reliability issues last month, “the idea of a Western RTO was floated again and again,” she added.

“While it won’t help us get through [this] summer, I agree that a Western RTO, designed by Westerners and for Westerners, could go a long way toward addressing the West’s needs in the decades to come,” Clements said yesterday.

Glick also reiterated his support for a western RTO on a call with reporters.

“I believe there needs to be an RTO in the West; I think the time is now,” he said yesterday. “The commission will continue to be deferential to the region, but at the same time, i think those discussions need to move forward.”

Commissioners also thanked Chatterjee for his nearly four years at FERC, as the outgoing commissioner offered his own emotional farewell and thanked fellow commissioners, staff and his family for their support.

Initially appointed by former President Trump in 2017, Chatterjee served as chair twice, including for the first eight months of the coronavirus pandemic.

“I’ve had four regulatory counterparts comment to me that nowhere else in the world could the son of Indian immigrants rise to the position that I did, and it speaks to the greatness of America that I got to have this opportunity in the last four years to represent my country at the highest level,” he said.

Initially appointed by former President Trump in 2017, Chatterjee served as chairman twice, including for the first eight months of the coronavirus pandemic.

A former aide to Senate Minority Leader Mitch McConnell (R-Ky.), Chatterjee nonetheless joined with Democrats on the commission on some votes during his tenure at FERC, including one order affirming the rights of transmission organizations to institute carbon pricing and another permitting distributed energy resources to compete in organized wholesale electric markets.

“I think it’s pretty fair to say that Commissioner Chatterjee, probably unfairly, came to the commission with a Capitol Hill reputation as a climate change denier,” Glick said. “But I’ve seen him give hard thoughts to the issues of the day, and he’ll be leaving this commission with a new moniker: the new green Neil.”

For his part, McConnell commended Neil for his work at the agency in a video message shared yesterday.

“While I was sorry to lose him from my team [in 2017], I was proud to see my fellow Kentuckian continue with public service in this new capacity and put his skills to work for all Americans,” McConnell said. “So Neil, thank you for your service and congratulations.”

The Biden administration has yet to announce who will replace Chatterjee on the commission, and his exact exit date is unclear. While he declined to share his next steps, Chatterjee left open the possibility of running for office.

“I’m not sure what I’ll do next, but I know that given the choice, I will serve my country again,” he said.