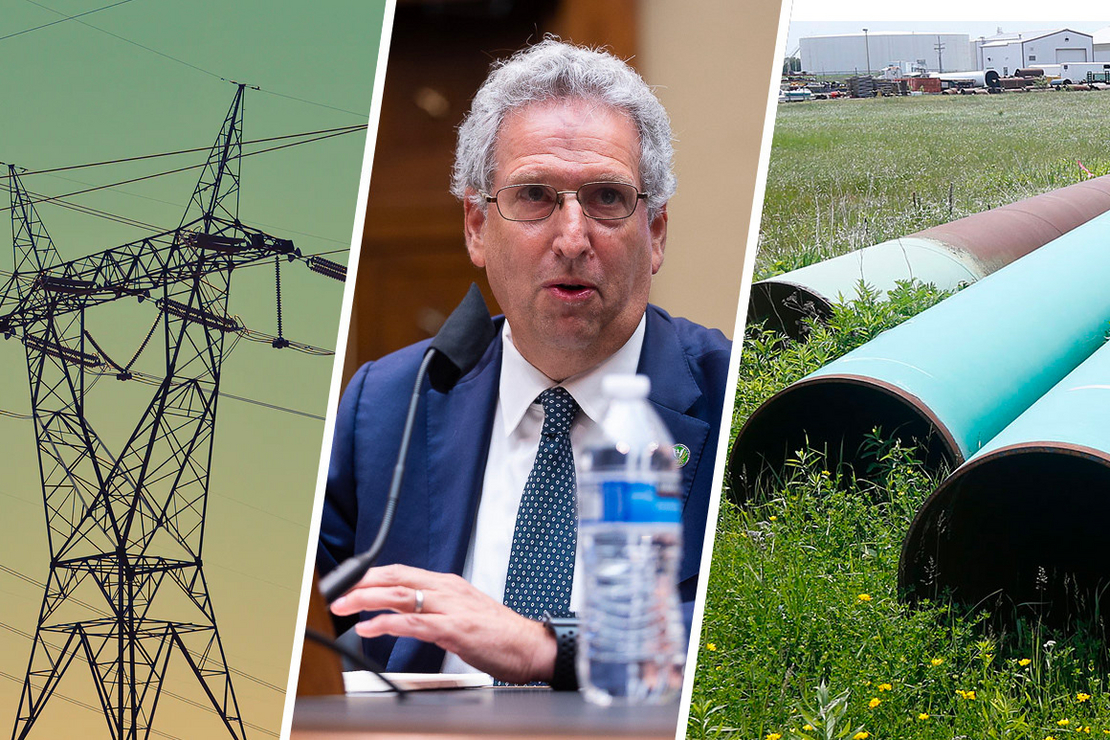 A natural gas compressor station in Massachusetts that came under scrutiny last year over safety concerns can remain in operation, the Federal Energy Regulatory Commission announced yesterday, even as members of the panel questioned whether it should have been approved in the first place.

In a sign of FERC’s shifting views on environmental justice with a new Democratic majority, three of the commission’s five members voiced concerns over the Weymouth Compressor Station’s location in a densely populated area near historically disadvantaged communities and already home to multiple polluting industrial facilities. Still, the commission stopped short of taking further action against the facility because it lacked the legal right to do so, FERC Chair Richard Glick said.

The independent agency’s order on the compressor station came during FERC’s first open meeting of the year and the first at which new Commissioner Willie Phillips fully participated in the proceedings. As the commission took actions affecting energy prices, cybersecurity, and oil and gas pipelines, partisan rifts among the two Republican and three Democratic commissioners continued to be on display.

FERC first issued a permit for the Weymouth Compressor Station on Massachusetts’ South Shore in early 2017 and allowed it to enter service in September 2020, despite objections from Weymouth town officials, community members, and Massachusetts Sens. Ed Markey (D) and Elizabeth Warren (D). Operated by Alberta-based energy giant Enbridge Inc. as part of the Algonquin pipeline system in New England, the station is designed to ease the distribution of natural gas in Massachusetts for export to Canada.

Shortly after the project came online, unplanned releases of natural gas forced it to shut down on two occasions. Following complaints from community groups and individuals about those events, FERC took the unusual step last February of opening a "briefing" on public health and safety concerns associated with the project — a move fiercely opposed by natural gas advocates, who said it created uncertainty for the industry (Energywire, Feb. 19, 2021).

But after reviewing comments filed in response to the briefing, the commission found there wasn’t enough evidence to justify revoking the project’s permit, Glick said.

"The certificate is final, and, under the law as it stands, that leaves only one issue for us to decide: whether the commission erred in allowing the project to go into service," he said. "The deficiencies in the now-final certificate do not provide a legal basis to prevent the Weymouth Compressor Station from entering service based on the record in this proceeding."

The decision is a blow for climate and environmental justice advocates, who note that the project is located within half a mile of more than 900 residences. Still, FERC’s conclusion was "not unexpected," said Alice Arena, president of Fore River Residents Against the Compressor Station.

"Ethically and morally, [FERC] made the wrong decision here, and we’re going to keep fighting it," Arena said. "You didn’t just put our community in jeopardy, you put the entire planet in jeopardy."

In a statement, Markey said he would keep fighting to close the facility.

"While Chairman Glick acknowledged that the compressor station’s location should never have been approved, FERC failed to act to protect the families in Weymouth and surrounding cities that already bear the negative health and environmental impacts of multiple industrial facilities in their community," Markey said. "Doing better going forward isn’t going to help the people of Weymouth living right now in the shadow of this dangerous fossil fuel facility."

Nonetheless, the FERC order calls on the Pipeline and Hazardous Materials Safety Administration to "be vigilant" in responding to potential safety concerns with the project if they come up in the future, Glick said on a call with reporters after the meeting. The order also directs Enbridge to "be a good corporation citizen" and reassure community members worried about the project, Glick said.

A spokesperson for Enbridge said the company was pleased with FERC’s conclusions. Both Enbridge and the Interstate Natural Gas Association of America had filed legal challenges following the commission’s February 2021 paper briefing, which they argued constituted an effort to revisit a permit that was final under the law.

FERC was right to determine that it could not prevent the project from coming online based on the evidence in the case and in acknowledging that PHMSA, not the commission, is responsible for ensuring the safety of pipelines, INGAA said.

“We are pleased to see the Commission recognize in a 5-0 vote that when a certificate is final, it stands under the law," the group said.

The order on the Weymouth project came as FERC continues to face criticism from the natural gas industry and Republican members of Congress about its oversight of gas projects. Critics — among them Republican Commissioners James Danly and Mark Christie — say the agency has been dragging its feet on reviewing and approving new projects under Glick’s leadership, with potential consequences for energy affordability and reliability.

"I do question this idea that we have wide-ranging, let’s say almost plenary ongoing public interest powers over a pipeline between the time the certificate issues and the time it goes into operation," Danly said of the Weymouth order.

Glick defended his approach to gas pipeline issues and said the commission also took steps during the meeting that could help ease high energy costs. In particular, FERC revised a metric for oil pipelines that affects their rates, a move that will save consumers an estimated $3.7 billion over a five-year period, Glick said.

In December 2020, FERC approved a different rate for the oil pipeline index, which Glick said at the time amounted to giving oil pipelines "a multibillion-dollar windfall" at the expense of consumers. Yesterday’s order, by contrast, returns to a previous policy for calculating the pipeline metric.

"There’s a number of orders the commission issued over the last few months that focused on reducing rates, in large part because the rates were deemed to be not just and reasonable in terms of being too high," Glick told reporters after the call. "That’s something we continue to focus on at the commission."

FERC’s revisions to the oil pipeline index, however, were not issued unanimously, with Danly and Christie dissenting in part on the order. In addition, Christie criticized another decision yesterday that will allow new parties to intervene in "extension of time proceedings" associated with a natural gas pipeline, hydropower plant or other project.

Included as part of an order granting a Pennsylvania gas pipeline more time to finish its project, the change will allow groups that had not weighed in on a project’s original request for a permit to nonetheless intervene if the developer asks for more time for construction. That could result in "potentially unlimited late intervention by new parties" while increasing legal costs for gas pipeline developers, Christie said.

"Basically, it’s a blank check for late intervention, and that’s not a legal standard. That’s a legal weapon, and it will be used that way," Christie said. "It’s going to be used, of course as we know, against any and all gas infrastructure projects, and it’s going to be used after FERC has found they are already needed."

According to Glick, the order only permits new parties to participate in extension of time proceedings if they refrain from "relitigating the issues in the underlying proceeding." Some parties might have an interest in how long it takes for a gas pipeline or hydropower plant to get built even if they didn’t weigh in on whether the facility should have been approved, he said.

"If a company comes in and asks for a certificate and asks to extend the time for the certificate, they should be able to justify that," Glick said. "They should be able to listen to the arguments that other folks make that don’t agree with their proposal. … If you don’t want the extra expense of litigating, go ahead and complete your project on time in the first place."

In a new notice of proposed rulemaking, medium- and high-impact utilities would be required to monitor internal networks following the Russian-led SolarWinds cyberespionage campaign that impacted hundreds of organizations and at least nine federal agencies. The notice seeks comments on whether to add a new standard or modify an existing one.

"FERC is seeking to address concerns that the existing standards do not address potential vulnerabilities of the internal network to cyber threats," the agency said in a press release.

Currently, cybersecurity standards set by the North American Electric Reliability Corp. do not focus on security monitoring inside the "trust zone" after a hacker breaches a utilities defense, according to the proposal, and the new monitoring ruling would help find and stop hackers in the early stages of an attack.

"In these zones, trusted vendors or authorized individuals are the only users with access, but they are not subject to monitoring under” current standards, the proposal said.

Supply chain attacks can circumvent those outside protections by breaching grid equipment vendors. In the SolarWinds case, Russian hackers used a trusted vendor to bypass protections and were able to stay inside federal networks for months, experts say.

But there are myriad ways hackers can find their way in. In the Colonial pipeline hack, the Darkside ransomware group used stolen login information to dive into the pipeline company’s network and caused one of the biggest hacks in U.S. energy history.

Internal monitoring can help a utility if it’s been breached, FERC staff noted. Recently, auditors discovered a cyber event that occurred through a vendor breach, but the utility was able to say that it was not impacted by the hackers due to internal network monitoring.

But while the notice is aimed at utilities that have a high to medium impact on the bulk electric system, FERC is also exploring whether the potential rule could benefit some low-impact systems.

Ben Miller, vice president of professional services and research and development at industrial cybersecurity firm Dragos, said that although few are eager for additional mandatory rules, the current standards “seemingly de-emphasized robust detection and monitoring capabilities” that are considered “foundational” for industrial environments.

“The NOPR today has definitely shifted that and sets a clear direction that asset owners monitoring and detection capabilities are important and often lagging,” Miller said in an email. “This is a great step today but NERC and the community have much work in front of it to turn this into reality.”

The notice came following FERC and DOE’s endorsement of a House bill that would create a federal pipeline standard with FERC as the main regulator, despite Republican and pipeline industry opposition (E&E Daily, Jan. 20). While Glick has long advocated for more robust standards for pipelines, Commissioner Phillips also expressed support for the legislation at yesterday’s meeting.

”As I’ve said before, I support efforts to improve the security of our nation’s pipeline infrastructure, including cybersecurity, and I’m hopeful that we can put the pieces in place to move forward this important issue,” Phillips said.