FERC meeting: Grid rules, a boost for gas and Manchin 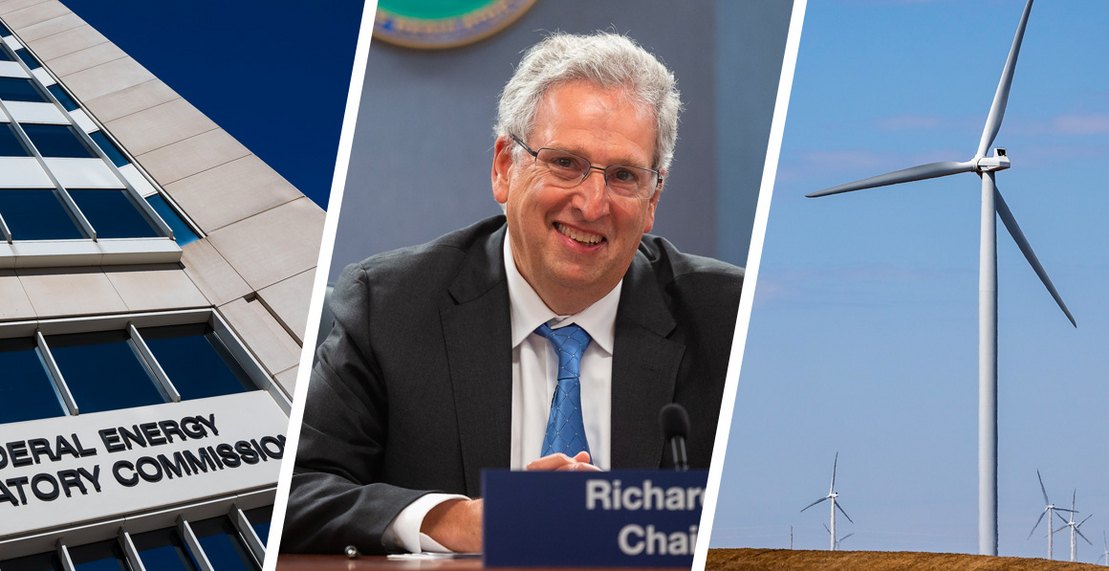 The Federal Energy Regulatory Commission moved Thursday to boost the reliability of the power system by addressing regulatory gaps that could strain the grid as renewable projects proliferate.

In response to recent grid disturbances at solar and wind farms nationwide, FERC directed the North American Electric Reliability Corp., or NERC, to propose new standards geared toward better predicting and understanding how those renewable resources behave. The changes could help keep the lights on and improve public confidence in the reliability of renewables, said FERC Chair Richard Glick.

“It’s very important that we make sure we move forward from a reliability perspective, and that the industry does everything it can to ensure the reliability of the grid as we rapidly transition to a clean energy future,” Glick said.

FERC’s actions on grid reliability came during what may be the penultimate commission meeting for Glick, a Democrat whose term expired this year. President Joe Biden has nominated Glick to continue leading the commission for four more years, but the Senate is unlikely to confirm Glick because of opposition from Sen. Joe Manchin, the West Virginia Democrat who heads the Senate Energy and Natural Resources Committee.

Glick did not comment on his future at FERC during the meeting. But he told reporters afterward that he has not spoken to Manchin since last week, when the senator publicly announced that he was “not comfortable” holding a hearing to consider Glick’s nomination. He also said that Manchin told him the reason for opposing his nomination, but said he would “prefer not to share it.”

“As I said earlier, there are things I can control and things I can’t control. It was factors beyond my control,” Glick said.

In addition, the commission authorized a new natural gas export project on the Louisiana Gulf Coast, even as the Democratic commissioners raised concerns about how industrial development in the region was affecting disadvantaged communities.

FERC’s two orders on grid reliability focused on “inverter-based” resources. Solar, wind and battery systems all use inverters to convert the electricity they generate into the power that’s used by the grid.

Until recently, the vast majority of electricity in the U.S. came from traditional power generators that don’t require inverters — including coal, natural gas and nuclear power plants. Reliability standards for the power system were designed with those traditional resources in mind, FERC staff said during the meeting.

Since 2016, there have been 12 incidents during which large swaths of solar and wind capacity have “tripped” offline, often for a matter of seconds or minutes, agency staff continued. The incidents have alarmed NERC, the nonprofit monitor of the U.S. power grid, which has warned that they could spur blackouts if sufficiently widespread (Energywire, Sept. 20).

In one of two decisions on the issue, the commission directed NERC to develop a plan for identifying and registering all inverter-based resources that affect the reliable operation of the bulk power system. Currently, wind and solar projects that are smaller than 75 megawatts are not required to be registered in the same way as other resources, Glick said.

In addition, the commission proposed that NERC develop new reliability standards or update the standards to close any potential gaps pertaining to inverter-based resources.

As the commission moves forward on the issue, it will be important to strike “the right balance on the costs and burdens” imposed by new requirements for inverter-based resources, said Commissioner Allison Clements.

“The resource mix is changing, and these [inverter-based] resources are coming online,” Clements said. “So let’s take those lessons learned and let’s make them reliable, because as we know, they will continue to grow exponentially in number.”

In a statement, NERC praised FERC’s “focus on reliability matters” and said it would continue to work with the commission and other parties to make sure that the bulk power is reliable.

FERC’s unanimous approval of the Commonwealth LNG project in Cameron, La., was met with praise by industry groups and sharp criticism from environmental justice advocates.

Slated to begin operating in 2026, Commonwealth LNG would be capable of exporting up to 1.18 billion cubic feet of natural gas per day to markets overseas. It constitutes the first major new liquefied natural gas project approved by the commission in 2 ½ years, according to LNG Allies, a trade association for the industry.

Environmental advocates on the Gulf Coast, however, said the commission’s decision would worsen public health for nearby communities that already live in proximity to other oil and gas facilities. They also criticized the facility’s expected contributions to climate change. The project would emit the equivalent of about 3.5 million tons of carbon dioxide per year, about the same as the annual emissions of eight natural gas power plants, according to EPA’s greenhouse gas calculator.

“The long-term environmental and climate damages far outweigh any perceived economical impact this facility would provide a local community,” said James Hiatt, southwest Louisiana coordinator of the Louisiana Bucket Brigade, an environmental justice organization. “We continue to demand that FERC be accountable to the people and not to corporations.”

Earlier this year, FERC staff concluded in an environmental impact statement that the facility would result in “disproportionately high and adverse” impacts for nearby environmental justice communities (Energywire, Sept. 12).

“Commonwealth LNG’s proposed mitigation is consistent with our precedent, as others have noted,” said Commissioner Willie Phillips, a Democrat. “But as a general matter, I believe that applicants should make every effort to improve community outcomes at large.”

Meanwhile, FERC’s order greenlighting the removal of four dams on the Klamath River was a win for Native American tribes that have said their way of life has diminished because of the dams, which have reduced salmon and other wildlife in the Klamath River. Decades in the making, the project is expected to be the largest dam removal initiative in U.S. history.

As decommissioning occurs in the coming years, the Klamath River is expected to see a number of benefits, including the return of salmon harmed for years by the dams, said Tom Kiernan, president of American Rivers.

“Projects like this are essential in these times of climate change, where we will see more floods and droughts,” Kiernan said. “The natural systems of rivers are the best way to respond to increasing variability caused by climate change.”

The dams were originally authorized at a time when there was less recognition of their environmental impacts and respect for tribes, Glick said. In approving the dam removal project, Glick said he valued the fact that tribes along the Klamath River — such as the Yurok and Karuk — would benefit from the decision.

“It’s a very important element that I think is in today’s order and a number of orders recently, for good. I think we’re making progress on that front,” Glick said of the commission’s engagement with tribes.

FERC’s Office of Enforcement also released an annual report yesterday detailing its activities this year. The department is charged with cracking down on fraud, manipulation and violations in the energy industries that FERC oversees.

All told, the commission approved 11 settlement agreements this year resolving investigations and litigation, totaling about $55.54 million in penalties and disgorgement.

“Ensuring that our energy markets are free from manipulation so that they can continue to serve consumers is a top priority at FERC, and it requires vigorous oversight and enforcement efforts,” Glick said.