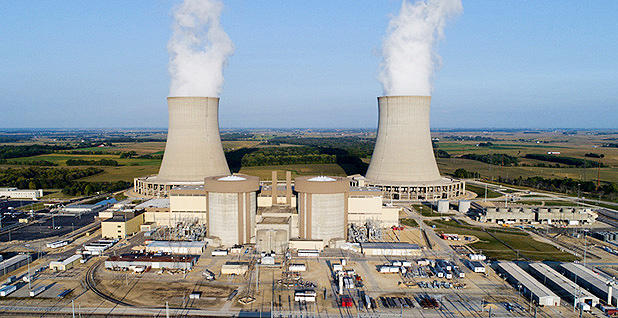 A scandal involving the state’s largest energy company and a controversial regulatory ruling is complicating a renewed push in Illinois to boost renewables and slash carbon emissions.

Unlike 2019, when new Gov. J.B. Pritzker (D) had his plate full of other pressing issues, the governor called for the passage of energy legislation this spring. He has not, however, endorsed any of the several energy bills pending.

Pritzker’s support for clean energy legislation notwithstanding, the task won’t be easy. Renewable developers and a political coalition led by environmental groups have embraced different approaches to energy reform. And that was before the federal order establishing complex new guidelines for PJM Interconnection’s $10-billion-a-year capacity market, of which Illinois is a part.

On top of that is the federal anti-corruption investigation that’s roiling the Capitol and has entangled Exelon Corp.

The scandal involving Exelon is a political headache for backers of one of the bills pending in Springfield, the "Clean Energy Jobs Act" (CEJA), because a central provision in the sweeping, 365-page bill is the withdrawal of northern Illinois from PJM’s capacity market.

The group backing the legislation, the Clean Jobs Coalition, says withdrawing from the market and giving the job to the Illinois Power Agency would save consumers money, especially in light of the recent Federal Energy Regulatory Commission order. And some of that money could be reinvested in wind and solar development to help ratchet down carbon emissions.

But tasking the Illinois Power Agency with prioritizing capacity from carbon-free energy sources would also boost revenue for Exelon’s fleet of nuclear plants in PJM that don’t already receive payments under the 2016 Future Energy Jobs Act.

And given the cloud hanging over Exelon and its lobbying practices, elected officials don’t want to be seen as doing the utility giant any favors.

State Rep. Ann Williams (D) of Chicago, a chief co-sponsor of "CEJA" and chair of the House Energy and Environment Committee, doesn’t dismiss the idea that Exelon’s nuclear fleet could benefit from the provision in "CEJA." The company, in fact, backs a narrower bill that would accomplish the same thing.

But Williams said helping Exelon, or any other company, isn’t the bill’s intent.

The aims of "CEJA" are reducing emissions while ensuring energy affordability, giving the Illinois economy a boost from taxes and jobs that will come from wind and solar development, and spreading the environmental and economic benefits in an equitable way, she said in an interview.

The scope of the bill, often compared to a state version of the Green New Deal, goes beyond boosting wind and solar development in Illinois. It calls for rebates for electric vehicle charging equipment to accelerate EV penetration as well as support for mine and coal plant workers and communities affected by pollution.

Like Pritzker, who in his State of the State speech pledged not to sign any energy legislation written by utilities — a response to the brewing scandal — Williams and other "CEJA" sponsors have said Exelon "won’t be driving the train" when it comes to negotiating bill language.

While the Chicago-based energy giant may take a humble approach at the Capitol this spring, there’s little question the company will be doing all it can to get favorable legislation passed.

And Exelon and other "CEJA" supporters want to focus public attention on the Trump administration and FERC’s order rather than the U.S. attorney’s ongoing probe.

"There is a clear conflict between the clean energy goals of our states and our customers on one side and the resource decisions being made by PJM and FERC on the other," Crane said yesterday on a conference call with analysts. "Unless states take action to protect their clean energy programs, FERC’s December order on PJM’s minimum offer price rule, or MOPR, will result in clean energy resources supported by the states being pushed out of the capacity market only to be replaced by carbon-based generation."

Exelon is among the many parties seeking a rehearing of FERC’s order.

So, too, are the American Wind Energy Association and Solar Energy Industries Association. But the renewable energy trade groups and solar and wind developers are advocating a very different approach to clean energy legislation in Illinois.

The renewable industry is backing the "Path to 100 Act," a bill to raise Illinois’ renewable energy standard to 40% by 2030 and provide funding to help get it there.

As it is, the bill’s supporters say existing renewable energy funding in Illinois is drying up and the state is well behind its goal of getting 25% of its energy from renewables by 2025.

Peter Gray, a spokesman for "Path to 100 Act" supporters, said the impact of FERC’s order for Illinois isn’t yet clearly understood, and the state should be cautious not to rush to enact policies that could have unintended consequences.

PJM still must file its response to FERC’s order next month, and the commission must address rehearing requests and, very likely, legal challenges. Meanwhile, the effect on capacity prices and the timing of future auctions is uncertain.

"The renewable energy industry in Illinois is focused on the immediate funding crisis facing the state’s renewable portfolio standard," Gray said. "Passing the ‘Path to 100 Act’ will allow renewable energy to continue growing while we evaluate potential action on capacity markets."

So far, no timetable has been established for legislative hearings on the various energy proposals pending.

Williams said talks among various parties, including the governor’s office, are ongoing, and she anticipates there will be a series of hearings and technical work groups in the coming weeks to discuss proposals.

"Certainly, the bill is a work in progress," she said.