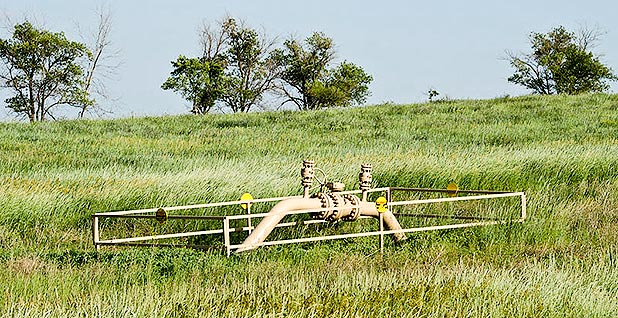 Courts are pushing the Federal Energy Regulatory Commission to get serious on understanding emissions related to pipelines. Tim Evanson/Wikimedia Commons

The Trump administration is grappling with how best to weigh the climate impacts of natural gas pipelines.

Why? Because a court ordered it. Will it make a difference? Tough to say.

The Federal Energy Regulatory Commission is updating an environmental review to tally greenhouse gas emissions from the Sabal Trail pipeline project, which would slice through Alabama, Georgia and Florida.

Some FERC-watchers say the agency’s work, while muted in the near term, could set the stage for more expansive climate reviews in the future.

"Further on down the line, if you have a FERC that’s much more of an environmental, left-leaning FERC, they could use a hook like that, sort of more intensive downstream [greenhouse gas] analyses, to complicate the plans for some other pipelines," said Tony Clark, a former Republican commissioner. "Maybe 10 to 15 years down the line."

Front and center is FERC’s analysis of emissions from burning natural gas transported through sprawling new pipelines. The U.S. Court of Appeals for the District of Columbia Circuit in August sided with the Sierra Club and ordered FERC to quantify downstream emissions for Sabal Trail and related projects.

The ruling was a momentous win for environmentalists. It was the D.C. Circuit’s strongest decision to date requiring FERC to do closer climate analysis. But the agency’s response — a five-page draft that estimates emissions and concludes there is no significant impact — highlights potential limits to the court’s ruling.

If the agency calculates emissions but still greenlights development, have environmentalists made meaningful progress on the issue? The question is critical as advocates are increasingly relying on the legal system to counter the Trump administration’s unwillingness to act aggressively on climate change.

Skeptics argue that the D.C. Circuit win for environmentalists was narrow, merely cementing an approach FERC had already largely adopted. Indeed, FERC has done similar calculations for several other pipelines over the past year.

But proponents of in-depth climate analysis maintain that the court’s decision was consequential, a victory for increased public disclosure and informed decisionmaking. Jason Schwartz, legal director for New York University’s Institute for Policy Integrity, argued that while he believes FERC should do more than merely quantify emissions, the calculations are still a sign of progress.

"It’s definitely a step in the right direction to be quantifying the downstream emissions," he said. "It’s certainly more information than we had in the [2015] environmental impact statement."

Before abruptly leaving FERC earlier this year, former Chairman Norman Bay championed the practice of broader pipeline analysis, even advising in one opinion that it’s a matter of "good government" to look more closely at the indirect climate effects of gas infrastructure.

FERC began in most cases estimating downstream emissions in mid-2016, ClearView Energy Partners LLC analyst Christine Tezak noted. Once finalized, the updated Sabal Trail review would bring the project in line with several others that have landed on the commission’s docket over the past year.

The calculations showed up when FERC approved the $1.8 billion Leach XPress and Rayne XPress pipelines earlier this year at a closed-door meeting. And FERC included estimates for emissions from burning gas from the recently approved Nexus, Atlantic Coast and Mountain Valley pipelines.

Given that FERC is already headed down the path of crunching emissions numbers and that it’s not a heavy lift for the agency, analysts and former FERC officials warned against expecting the Sabal Trail ruling to spur any dramatic near-term changes in project approvals.

Clark, now a senior adviser at Wilkinson Barker Knauer LLP in Washington, noted that FERC’s reviews occur under the National Environmental Policy Act, a statute and process that require a "hard look," not a particular outcome.

On the flip side, some pipeline developers even favor such analysis as a buffer from legal uncertainty. If FERC stepped back and declined to measure downstream emissions for future projects, litigation could stall pipeline construction.

Some see the Sabal Trail case as a cautionary tale: Depending on the D.C. Circuit’s next move, the project could be forced to halt operations until FERC completes its updated analysis.

Not everyone at FERC is on board with the added element of review. In a recent interview with E&E News, current Chairman Neil Chatterjee noted that he disagreed with the D.C. Circuit’s opinion, and he warned that FERC’s recent decision not to challenge that aspect of the ruling should not be interpreted as a commitment to do the same analysis for every future application.

He added, "I personally think it was a wrongly decided decision, and I think it has implications that go beyond FERC. I think FERC will be able to continue to do its work, but we need to cautiously figure out our legal strategy moving forward because I do believe there could be implications beyond the agency."

Pressed for further details on the agency’s plans for future analyses, Chatterjee said the agency will "have to see how the legal process plays out."

While industry may be content with inclusion of the downstream analysis, green groups are beating the drum for deeper reviews at FERC.

The Sierra Club maintains that NEPA requires more than a simple emissions tally. The group says the updated review FERC drafted for Sabal Trail actually falls short of what the D.C. Circuit demanded because it does not take its greenhouse gas estimates a step further by considering their incremental role in a changing climate.

"FERC’s position seems to be that just plunking in a number and not providing any discussion of the significance is enough," Sierra Club attorney Elly Benson said. "But the court’s decision said they have to look at the significance and the cumulative impacts, which they have not been doing and which their draft SEIS [supplemental environmental impact statement] does not do."

Benson and others filed comments yesterday on FERC’s proposed update, urging the commission to do more. The agency is expected to finalize its SEIS in the coming months.

Energy lawyer Fred Jauss, a partner at Dorsey & Whitney LLP, noted that while FERC’s quick action to prepare the draft may provide "a certain measure of comfort" to other developers concerned about delays, they shouldn’t rest easy until the D.C. Circuit weighs in again.

"That comfort should be tempered until the D.C. Circuit rules on whether the commission’s greenhouse gas analysis contained in the SEIS is sufficient to meet the commission’s obligations under NEPA," he added. "Until this issue is settled, developers should be prepared to either provide a greenhouse gas analysis of their project as part of their application, or be prepared to face potential delays to their projects at the commission level and at the appellate level."

Some experts doubt the D.C. Circuit will second-guess FERC’s approach to crunching the numbers and finding no major impact.

"The courts are likely to avoid wading into arguments about methodology and judgments about whether this is significant enough to change the result, change the decision," Vermont Law School professor Pat Parenteau said.

"As long as you’ve thought about it, you’ve disclosed it, you’ve let the people comment on it, and then you decide to go ahead, that’s probably going to be upheld most of the time," he added.

Still, environmentalists argue that the D.C. Circuit’s insistence that the agency at least look at downstream emissions for Sabal Trail is no small gain — even if they’re unable to advance the issue further in the short term.

"Forcing FERC to disclose and discuss the link between these huge fossil fuel projects that they’re approving and climate change is helpful," Benson said. "Saying, ‘FERC, you’re not allowed to bury your head in the sand as to the climate impacts of these pipelines, and you’re also letting the public know about the true impacts of these pipelines,’ I think that’s a big step forward."

Michael Burger, executive director of the Sabin Center for Climate Change Law at Columbia Law School, noted that broader disclosure can yield tangible benefits, including prompting developers to propose projects with a smaller footprint in the first place and mobilizing private citizens to voice their concerns.

"For accountability to take place, for opposition to become mobilized and for sponsors to be worried enough about those things to actually come forward in the first instance with a smaller project or a less impactful project than they otherwise would, all require that these disclosure requirements be enforced," he said.

He pushed back on criticism that extra layers of review that don’t change the outcome are merely an "exercise in paperwork."

"The problem with that," he said, "is that it really discounts the value of transparency and disclosure and public participation by focusing exclusively on the final result."

While the Sabal Trail case may have muted near-term effects, experts say the ruling could pave the way for more expansive climate reviews should a greener administration win the White House.

In coming years, Clark said, FERC will likely "spill more ink" and be more attentive to reviewing downstream emissions tied to proposed pipelines shipping gas to clear destination points, such as a generator.

With that background, Schwartz of the Institute for Policy Integrity said greens will keep up the pressure, pushing FERC to keep the downstream analyses in place and to take further steps: utilize the Obama-era social cost of carbon tool to measure the cost of emissions associated with pipelines, analyze the impacts of upstream gas production, and more closely evaluate the impacts of methane leakage from gas pipeline networks.

While the Trump administration has already scrapped Obama-era federal guidance on how agencies should incorporate the effects of climate change into their reviews, Taub suggested the White House may be wise to replace the language.

She pointed to the now-defunct White House Council on Environmental Quality (CEQ) guidance in March that Trump scrapped as part of a larger effort to dismantle his predecessor’s climate legacy and for which he has yet to offer a substitute.

Without CEQ weighing in, Taub said, agencies like FERC are left to muddle through the thorny issue of how to address climate impacts under NEPA, with courts often having the final say.

"The courts will be the only guide until this administration issues its own guidance on how to consider GHGs under NEPA, and potentially new guidance on the social cost of carbon," Taub said. "If I were sitting at CEQ right now, I’d want to replace it rather than remain silent, because then you can help guide the discussion."

Others suggested that the absence of the CEQ guidance makes it more difficult for opponents to poke holes in FERC’s environmental reviews — and have duly noted that many environmentalists have shifted their focus to wetland and water quality permits.

For now, climate change continues to feature prominently in opposition of pending natural gas pipelines, with critics pointing to Sabal Trail as evidence that FERC needs to do more and go beyond mere emission tallies.

If the courts don’t force that action?

"I don’t think it deflates the possibility of continued litigation challenges having some traction in the courts around fossil fuel infrastructure," Columbia’s Burger said. "Environmentalists tend to be pretty good at coming up with new advocacy strategies and finding legitimate faults with environmental reviews."