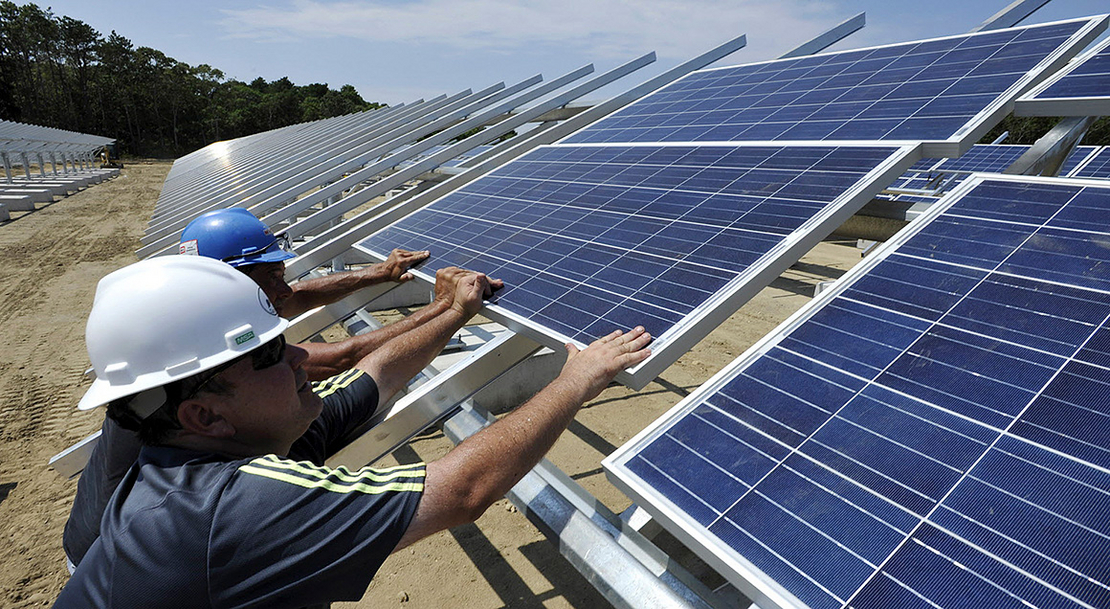 Federal regulators have approved plans to phase out a contentious grid policy that has pitted New England states against the region’s grid operator, in a move observers say could bolster solar and wind while lowering electricity costs.

The Federal Energy Regulatory Commission accepted a proposal last week from ISO New England to eliminate a power market rule — known as the minimum offer price rule — by 2025. The decision marks what could be the end of a three-year debate at FERC over how much state clean energy policies tamper with regional electric capacity markets and whether they must be “mitigated” through price rules.

Getting rid of the minimum offer price rule could alter the fuel mix in the six-state region, where natural gas accounted for more than half of the generation last year. Still, some renewable energy advocates opposed ISO New England’s proposal, having argued that the price rule should be eliminated sooner than 2025.

During the Trump administration, when FERC was under Republican control, the commission approved versions of the minimum offer price rule, or MOPR, for PJM Interconnection, ISO New England and the New York Independent System Operator, three grid managers whose territories collectively span 20 states and the District of Columbia (Energywire, Dec. 20, 2019).

Now, the rules have been eliminated in PJM and New York, and are on track to be eliminated in New England with yesterday’s FERC order, ending the “federal-state antagonism over the MOPR,” said FERC Chair Richard Glick.

“There can be no winners in a regulatory civil war between FERC and the states,” Glick, a Democrat and longtime critic of MOPR policies, said in a statement.

Described by some as a compromise among states, clean energy advocates and energy generators, ISO New England’s new plan seeks to balance efforts to transition to renewable energy with the need to ensure that fossil fuel power plants and other generators do not retire “prematurely,” according to the grid operator.

“With the transition proposal and long-term reforms approved, ISO New England, the New England states, and stakeholders can focus on the work necessary to ensure that the future grid is a reliable one,” Matthew Kakley, lead communications specialist at ISO New England, said in an emailed statement.

Clean energy advocates and environmental groups panned the plan for its inclusion of a transitional period, which they argued would needlessly delay the transition and hurt the burgeoning offshore wind industry (Energywire, May 3). Instead, ISO New England should have proposed to eliminate the MOPR immediately, advocates said.

Under the grid operator’s proposal, a total of 700 megawatts of state-subsidized capacity resources will be able to participate in the next two capacity auctions, with the cap scheduled to be fully lifted by the February 2025 auction. The auctions, which offer a source of revenue for generators, are designed to ensure that there are enough resources available to meet peak electricity demand in New England three years down the road.

“A delay like this is going to keep us overly reliant on resources that will make our decarbonization [efforts] more difficult,” said Susannah Hatch, regional lead for New England for Offshore Wind, a coalition of environmental and pro-offshore wind groups.

Several states have plans to scale up offshore wind, which could help balance the power grid and reduce reliance on fossil fuels. Massachusetts, for example, has committed to procuring 5,600 megawatts of offshore wind capacity to help it reach its goal of net-zero greenhouse gas emissions by 2050.

The 700-MW “exemption” over the next two auctions was designed to help ensure that offshore wind projects can participate, Kakley said. That’s in addition to some other avenues for renewable resources to enter the market, according to the grid operator.

“We believe this will adequately cover the quantity of resources actually looking to enter the market over that period, before the MOPR is removed completely for FCA 19,” Kakley said, referring to the auction planned for February 2025.

The decision comes after FERC commissioners expressed concern about electric reliability risks facing New England. The region’s power supply is dependent on imported fossil fuels, and consumers pay some of the highest electricity prices in the country.

By contrast, national clean energy groups, including the American Council on Renewable Energy and the American Clean Power Association, have argued that MOPR policies have done little to make power grids less prone to blackouts or other challenges. Instead, they have forced consumers to overpay for carbon-free resources, groups have argued.

While many clean energy advocates opposed ISO New England’s filing because of the transition period, conventional generators in New England generally supported it, characterizing it as a compromise for all parties involved. Even though the plan does not guarantee a particular outcome, it allows for “time and space to set up the necessary market to meet the changing resource mix,” said Dan Dolan, president of the New England Power Generators Association.

“By the nature of any compromise, it means that generators did not get everything we wanted here,” Dolan said in an email. “It allows the region to take a reasonable path forward to integrate state-sponsored resources while working to make necessary market improvements that maintain the reliability of the electric grid.”

State officials in New England also seemed to view the plan as a compromise that will ultimately move the region toward a cleaner, more reliable energy system.

The New England States Committee on Electricity, which represents the states in issues pertaining to ISO New England, ultimately did not oppose the grid operator’s proposal, so long as the “deadline” for full MOPR removal was maintained. Some individual officials, however, such as Massachusetts Attorney General Maura Healey (D), had called on FERC to reject it because of its inclusion of a transitional phase.

Jeff Dennis, managing director and general counsel at Advanced Energy Economy, said the clean energy trade association ultimately chose not to oppose the grid operator’s proposal, even though the group also had concerns about the pace at which MOPR will be eliminated.

If FERC had ordered ISO New England to go back to the drawing board and propose a new plan to immediately eliminate the price rule, it might have distracted from other issues and reforms currently under discussion in the region, Dennis said.

With the proposal now approved, there is, at the very least, a firm deadline “hardwired” into the grid operator’s plans, he added.

“A majority of four [FERC] commissioners have said that MOPR policies that restrict states from pursuing their own generation objectives, consistent with authority in the Federal Power Act, are unjust and unreasonable,” Dennis said. “I think the order is a milestone in that sense, even if it does accept this less-than-ideal and not-terribly-justified transition period.”

He also noted the broader significance of the decision. A FERC order last year allowed a plan from PJM to eliminate its own MOPR policy, while another this year approved getting rid of the MOPR policy in New York. The former order, however, is being challenged in the 3rd U.S. Circuit Court of Appeals (Energywire, Nov. 9, 2021).

“Assuming the 3rd Circuit doesn’t overturn that outcome, there will be no more MOPR policies,” Dennis said.