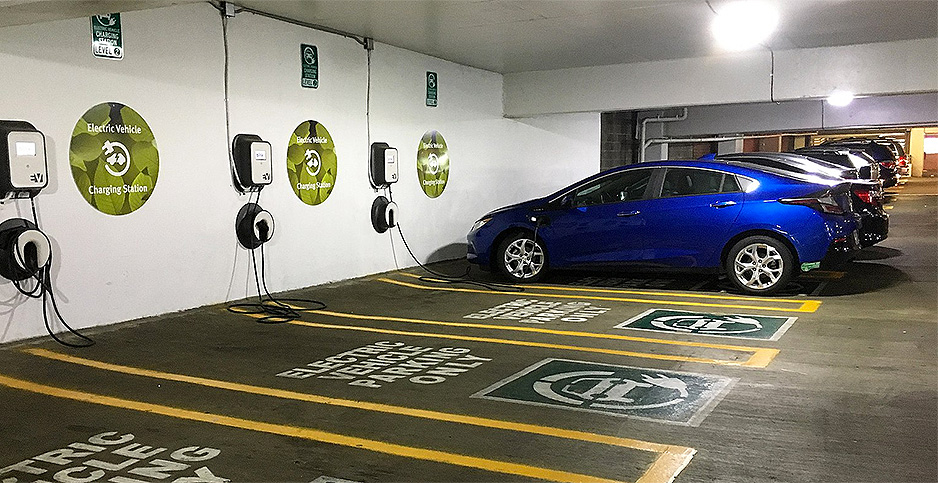 New building codes proposed at the International Code Council that would require additional wiring in the parking lots of new residences and commercial buildings to support electric vehicle chargers. Mariordo/Wikimedia

Natural gas interests and housing developers will mount a last-ditch effort next week to prevent U.S. model building codes from including new provisions to promote the electrification of cars, stoves and water heating.

Though voluntary and little known to the general public, model codes are widely influential standards for energy efficiency in buildings. The International Code Council (ICC), the nonprofit that oversees drafting the codes that would take effect in 2021, says they are "the most widely used and adopted set of building safety codes in the world."

Over the past year, the council’s proceedings have turned into a battleground, complete with accusations of behind-the-scenes deal-making and a get-out-the-vote campaign led by municipal energy officials, efficiency advocates and environmentalists.

"There’ve been appeals before at the ICC. But this is the first time it’s happened to this extent," said Kim Cheslak, associate director of codes and policy at the New Buildings Institute and the author of several proposals.

New provisions that favor low-carbon electric technologies — including several that went unchallenged by gas and developer groups — were less of a focus during the last code cycle three years ago, she added.

"None of that was going to happen before this year," Cheslak said.

"It’s not like no one’s been talking about carbon," she said of efficiency advocates and officials, "but there’s been a real shift in the need to start thinking about the carbon-energy interaction in our buildings."

On Monday, representatives from the American Gas Association and the American Public Gas Association will present their appeal of a code update that would require outlets to be installed close to gas or propane appliances in order to facilitate a future transition to electric water heaters and stoves. Another provision being challenged would require additional wiring in the parking lots of new residences and commercial buildings to support electric vehicle chargers.

Housing developer associations are also trying to get those updates reversed, along with about 18 other groups, saying they would raise upfront costs and discourage demand for new construction.

The battle over the ICC’s model codes could also foreshadow future fights involving state, city and even county agencies, which will have latitude to decide when, if and how to adopt provisions that smooth the introduction of electric replacements for gas cars, boilers and appliances.

A few states, including Michigan and Massachusetts, have laws requiring the model codes to be adopted promptly and in full. But most don’t, and several home-rule states leave the issue up to counties and towns.

"It has to be adopted at the city and state level," said Lauren Urbanek, a senior energy policy advocate at the Natural Resources Defense Council and author of the electric stove and water heater provision. "That’s what we’ll be working on: that this great model code doesn’t just sit on the shelf, but that it gets adopted."

The American Gas Association didn’t answer questions about what it would do if its appeal failed, but it noted in an emailed response that it was engaged in ensuring that codes in the United States and abroad "evolve with new natural gas technologies."

In an email, American Public Gas Association spokeswoman Audrey Casey said that if the group’s appeal were to fail, it would seek to "educate building code officials" about adoption of the 2021 codes, "particularly regarding our concerns with the new code provisions" that promote building electrification.

The model codes’ clean energy provisions come as part of a larger push from city and state officials for energy conservation in buildings, since electrified alternatives are often more efficient.

At an annual summit last summer in Honolulu, the 1,400-city Conference of Mayors called on its members to back a 10% boost in the overall efficiency of the ICC’s energy conservation code — several times that of past years.

That would be a key way to keep cities on track with the Paris Agreement’s goals for carbon dioxide reductions, argued a resolution from the conference, citing an analysis by the consulting firm McKinsey & Co.

Post-2021, the ICC’s model codes should aim for a 2050 net-zero emissions goal for building construction, the resolution said. It urged mayors to "maximize their jurisdictions’ online voting" for the ICC’s 2021 codes.

Implemented during the 2018 code cycle, online voting meant that eligible voters would no longer have to fly out to a weeklong convention and cast their ballots in person — a requirement that had kept voting rolls slim in past years.

Efficiency and clean energy advocates saw that as an opportunity to push through bolder changes to the codes. Some were further emboldened by a New York Times report last fall that the ICC had long adhered to a secret deal that granted housing developers four of the 11 seats on a technical committee that casts the first round of votes.

The developer group that won the seats — the 140,000-member National Association of Home Builders (NAHB) — defended the deal to E&E News as "totally appropriate," adding that builders should have "an equal say to the code officials as to what goes into the building code."

"Builders understand how homes are constructed and are responsible for applying the code requirements," wrote Liz Thompson, a spokesperson from the group, in an emailed response. "And at the end of the day they are the ones who must meet the needs of the consumer, which includes affordability."

But the secret deal’s revelation dealt a blow to the technical committee’s reputation as a council dominated by impartial, "in-the-weeds building scientists," said Bill Fay, director of the Energy Efficiency Codes Coalition.

"I was one of the most virulent opponents of that," he said of the agreement.

The coalition, in tandem with environmentalists, associations of energy officials and others, launched a campaign to recruit eligible voters from state, city and county agencies.

The campaign proved decisive. Online voters were able to override, with two-thirds of the vote, the technical committee’s defeat of 20 new code provisions.

Developer associations, along with representatives of the air conditioning and heating industries, have blasted that outcome.

The Leading Builders of America, whose members construct 40% of the country’s new homes, accused the Energy Efficiency Codes Coalition in an April appeal of "deliberate and calculated manipulations" and asked the ICC to discard the online vote’s results.

It was joined by the 140,000-member National Association of Home Builders, which noted that the results were unprecedented in previous code cycles and argued that the eligibility of many online voters was "suspect."

Both developer groups also echoed the gas industry’s argument that the two code changes promoting "readiness" for electric vehicles and electric water heaters were inappropriately included, because they did not directly affect the "effective use and conservation of energy."

But some building electrification advocates speculated that the industry’s opposition was part of a broader front against electrification policies, which have sought to restrict the use of gas for heat or cooking. Opposition to such gas bans has sparked lawsuits, legislation and campaigns from gas interests in California, Massachusetts and other states.

The appeals may be facing long odds. An investigation by ICC staff, sparked by earlier complaints about the online voting process, concluded in April that "no voting irregularities occurred."

The model codes are unlikely to be the country’s most aggressive in promoting building electrification or other clean energy technologies.

The EV and electric water heater provisions being fought by developers and gas groups, for example, aren’t without precedent in building codes: Atlanta, Chicago, Denver and Oregon are among the cities and states that already require EV-capable parking spots.

Still, environmentalists and efficiency advocates were also able to secure clean energy provisions in the model code — in some cases, over the advice of the ICC’s technical committee — that require on-site solar units for commercial buildings, along with electrical accommodations for energy storage and optional standards for buildings that consume zero net energy. Those provisions aren’t being appealed.

"We got some wins," said Cheslak of the New Buildings Institute.

"Whatever happens with the appeals, there are some things in the 2021 ICC already that are going to help the renewable and clean energy industries."