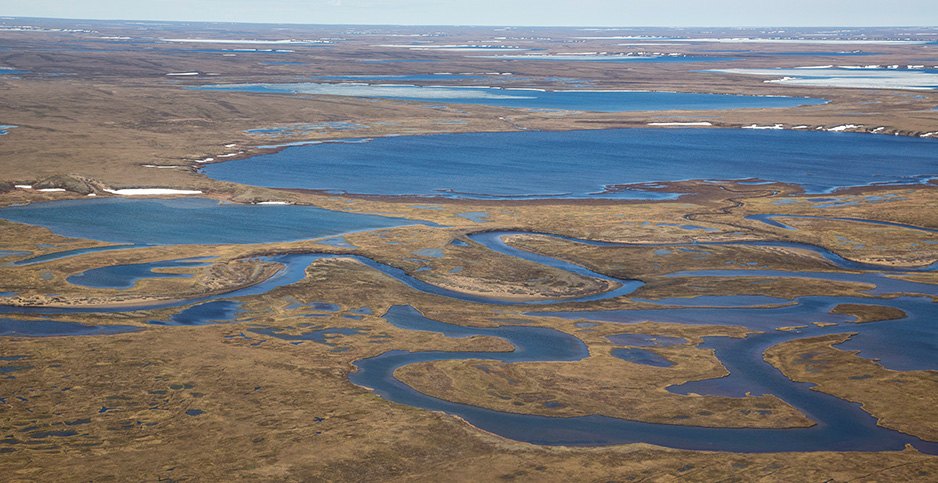 Teshekpuk Lake is protected as critical habitat for polar bears, migrating waterfowl and caribou herds, and for subsistence hunting for Alaska Natives. Bureau of Land Management

The Interior Department tomorrow is due to auction off the last available oil and gas leases at the eastern edge of the National Petroleum Reserve-Alaska, a 22.1-million-acre block of federal property on Alaska’s North Slope.

Most of the leases up for sale are located in the neighborhood of ConocoPhillips Alaska’s celebrated Willow oil discovery, which is estimated to hold between 400 million and 750 million barrels of recoverable oil.

Oil companies and Alaska officials have been urging federal regulators to expand the amount of NPR-A lands open for exploration. They are especially eager to get access to leases in an area just west of the Willow property, which the U.S. Geological Survey has suggested might also contain significant amounts of oil.

But that property is part of a little-known wildlife region called the Teshekpuk Lake Special Area. In 2013, the Obama administration released an integrated activity plan barring oil and gas leasing on 3.1 million acres of land within the special area.

The Teshekpuk Lake wetlands complex includes a 320-square-mile lake surrounded by hundreds of acres of marsh and ponds. Each summer, the region comes alive with hundreds of thousands of birds migrating from all seven continents. The lands also provide calving grounds for roughly 400,000 caribou in the Teshekpuk Lake and Western Arctic caribou herds. Some Teshekpuk caribou are year-round residents of the region.

Conservation groups insist that the 2013 management plan went a long way toward balancing wildlife protection while giving the oil industry access to roughly half of the reserve lands.

"We have significant data that shows how important this area is for molting geese, half a million shorebirds, all four species of eider, tens of thousands of caribou, and denning polar bears," Culliney said. "Any new plan must protect this vital wildlife habitat."

Culliney said conservation groups "see no good reason to open more acreage and we see a lot of good reasons to keep the area protected as it is."

But the Trump administration is determined to open some of these protected lands for development. Regulators are drafting a new integrated activity plan (IAP) and an environmental impact statement that would rewrite the ground rules for the reserve (Energywire, Nov. 20).

Interior Department Assistant Secretary for Land and Minerals Management Joe Balash recently observed that the time has come "to re-evaluate some of the areas that were previously left unavailable for leasing, as well as open up avenues for infrastructure to be installed, both pipelines and potentially roads."

"Some of the acreage that is probably most prospective is currently not available for leasing under the current plan," he said. "We want to take a look at some of those areas."

Interior is specifically targeting the Teshekpuk Lake region, although Balash acknowledged that the area provides "a home for an enormous collection of waterfowl that migrate through there. It is one of the key sensitivities that we will be working to identify in any associated stipulations that might be attached" to oil development in the region.

On a recent Voice of Alaska radio show, ConocoPhillips Alaska President Joe Marushack also agreed that some of the Teshekpuk Lake region should be protected. But, he added, "not as much as is sectioned off right now. We think that you can still do very responsible development in the areas around that" special area.

Marleanna Hall, executive director of the Resource Development Council for Alaska, noted that regulators are likely to restrict leasing to "limit any impact on wildlife [so] that development can coexist with wildlife."

"Technology is constantly improving and advancing and reducing the footprint of development, while the need for responsible development of American oil and gas is still strong and demand continues to increase."

‘An incredible amount of science’

The National Petroleum Reserve-Alaska, which is about the size of the state of Indiana, was created in 1923 as an emergency oil supply for the U.S. Navy.

In 1976, Congress transferred control of the region to the Interior Department, and a year later, the Carter administration created the Teshekpuk Lake Special Area to protect migratory waterfowl and shorebirds.

BLM did not sell its first oil and gas leases in the NPR-A until 1999, and the controversy over how to manage the Teshekpuk Lake region has been going on ever since.

In 2006, Interior announced plans to sell leases close to the lake. But environmental groups challenged the lease sale in court, and an Alaska federal district court judge blocked the sale, ruling that regulators had not adequately considered the cumulative effects of drilling on the Teshekpuk Lake caribou herd.

This litigation led Interior to begin work on an integrated activity plan for the entire reserve, which is the nation’s largest contiguous block of federal lands.

"It was an ambitious undertaking," recalled former Deputy Secretary of Interior David Hayes.

"We had an incredible amount of science developed around the Teshekpuk Lake, in particular," he said. "We looked at wildlife concentrations in different blocks in the area, and we concluded that we couldn’t scalpel off additional acreage rationally, because of the area’s importance to three classes of interests — migratory birds and shorebirds, the caribou for calving and also for insect relief, and third as a subsistence area for Alaska Natives."

"It was the most thorough and scientifically based environmental impact statement exercise I’ve ever been associated with, and it shouldn’t be reopened without new science," said Hayes, now executive director of New York University School of Law’s State Energy & Environmental Impact Center.

On Nov. 21, BLM announced plans to develop those reports and set a Jan. 7 deadline for submitting comments. Regulators also scheduled a series of public meetings on plans to rewrite the activity plan. But last week, four of the sessions in northern Alaska villages were canceled due to the magnitude 7.0 earthquake that hit Alaska in late November.

How much oil is in NPR-A?

The 2013 management plan was based in part on the U.S. Geological Survey’s 2010 assessment of the undiscovered oil and gas reserves available in the NPR-A. At the time, scientists concluded that the region held a mean volume of only 896 million barrels of oil and 53 trillion cubic feet of natural gas.

But in recent years, ConocoPhillips, Armstrong Energy Corp. and Caelus Energy LLC have discovered prolific oil fields in two types of North Slope rock structures that had been long overlooked by the petroleum industry — the Nanushuk and Torok formations.

Based on those discoveries, USGS last year issued an updated report concluding that the petroleum reserve holds 10 times more oil than its earlier estimates — a mean average of 8.7 billion barrels of oil. The report also lowered its estimate of available natural gas to 25 trillion cubic feet.

Those promising Nanushuk and Torok rock structures are most prevalent in the northeastern corner of the petroleum reserve, where the Teshekpuk Lake Special Area is located. As a result, the Teshekpuk region is the only one of the NPR-A’s five special areas that’s being targeted for new oil development.

In addition, Interior is also considering whether to create special corridors for roads and pipelines. That infrastructure could affect the entire NPR-A.

The state of Alaska and the North Slope Borough are lobbying for an Arctic road network that could connect eight remote Native communities to the state’s limited highway system. The proposed road network would also give industry access to promising new oil, gas and mining reserves on the North Slope (Energywire, Sept. 12, 2017).

Environmentalists warn that new oil development and road construction is being considered at a time when the Arctic is warming at twice the rate of the rest of the world. David Krause, Arctic lands conservation specialist at the Wilderness Society, noted that the Teshekpuk Lake region consists of "incredibly vulnerable and fragile ecosystems."

"For these ecosystems to have a chance to adapt, they need to be whole and healthy and intact," he argued. "There needs to be free movement of animals and migration patterns so that these birds and wildlife have the conditions to effectively adapt to a very altered Arctic."

Audubon’s Culliney said that saltwater intrusion could shift the types of vegetation available around the lake, making it more attractive to waterfowl but less valuable for caribou. If that happens, the unaffected areas around the lake would be far more critical for caribou forage.

"So you’ve got a changing climate and more and more pressure from development," she observed. "From a broader context, we already have [oil] development in the NPR-A. We have the Prudhoe Bay oil field right next door, as well as possible leasing in the Arctic Ocean."

"From a bigger picture, some areas should remain protected for birds and wildlife," Culliney said. "And Teshekpuk Lake area is a wise choice from a conservation standpoint."

"Why would we be thinking about a frontier development in one of the most sensitive areas on this Earth?" he asked. "It seems almost like a willful poke in the eye of oil trumping environmental interests to be even thinking about opening up the Teshekpuk Lake area or its environs to oil and gas and development."