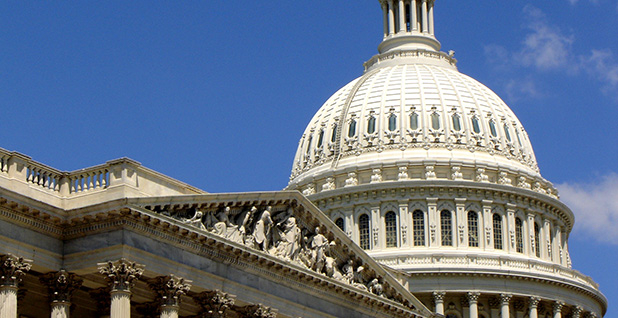 Liberal groups are moving to repeal the Congressional Review Act as conservatives push for expanded use. Nilington/Wikipedia

After a precedent-setting vote in the Senate, conservative and liberal groups are escalating their fight over the Congressional Review Act.

In response, the public interest group Center for Progressive Reform is leading a campaign to convince lawmakers to repeal the CRA entirely.

Basically, the statute requires federal agencies to submit final rules to both Congress and the Government Accountability Office before they can take effect.

Lawmakers then have 60 legislative days to review the rule. During that time, members can schedule a simple majority, up-or-down vote on rules they want to overturn using fast-track procedures.

Until 2017, the CRA had only been used successfully once to toss out a Labor Department rule in 2001. But with a Republican-controlled White House and Congress, lawmakers wasted no time in submitting 14 resolutions of disapproval that were then signed by President Trump (E&E Daily, May 12).

Conservatives in and out of Capitol Hill are also pushing to use the CRA for older actions — whether guidance or other similar documents — that were not submitted to the GAO and Congress according to the statute.

"S.J. Res. 57 represents an unprecedented and unwise use of the CRA procedure," the group wrote. "The law was intended to allow Congress to block the implementation of new agency rules before their impact is felt — not guidances that have been in place for years."

Susan Dudley, who served as administrator of the Office of Information and Regulatory Affairs under President George W. Bush, called it interesting that the CRA has become mired in partisan divides.

"I would think that Democratic as well as Republican members would find the CRA valuable to hold agencies accountable," said Dudley, who now serves as head of the George Washington University Regulatory Studies Center. "I think even when you’re not in the majority, it can be a useful tool."

Pacific Legal’s two lawsuits, filed April 11, both seek to expand agency compliance with the CRA. But they take different tacks.

The first suit, filed on behalf of ranching clients in Idaho, argues that the Agriculture and Interior departments failed to submit greater sage grouse conservation plans to Congress.

He added, "If the rules are delivered to Congress, I think there might very well be a majority in both houses to overturn them."

The second suit, filed on behalf of the Kansas Natural Resource Coalition, argues that the Fish and Wildlife Service should submit a somewhat obscure conservation rule to Congress so it can take effect in compliance with the CRA.

The rule, known as the Policy for the Evaluation of Conservation Efforts When Making Listing Decisions (PECE), incentivizes property owners to participate in the coalition’s plan to protect the lesser prairie chicken, according to the suit.

"It’s a very popular rule that isn’t in effect," Gaziano said. "We want to force the agencies to send that to Congress. But we know that Congress isn’t going to overturn that."

"Am I in favor of litigation to have rules sent to Congress? Yes," Larkin said. "The act requires agencies to submit to Congress every new rule they adopt before they can take effect. Courts exist in part to prevent the executive branch from acting unlawfully in a manner that injures private parties."

On the left, the Center for Progressive Reform’s campaign to repeal the CRA argues that congressional Republicans have used the 1996 law to target crucial protections for public health, safety and the environment.

"Everybody should be concerned about how the Congressional Review Act has been used under the Trump administration," said James Goodwin, a senior policy analyst with CPR.

"More specifically, it’s pretty clear that the people who stand to lose the most from these repeals are first and foremost workers, the poor and people of color," he said.

As an example, Goodwin cited the Interior Department’s Stream Protection Rule, which died with a stroke of Trump’s pen last year (Greenwire, May 22). The regulation was aimed at protecting waterways from coal mining pollution.

"This rule would have benefited some of the poorest communities in America, the Appalachian communities whose water supplies are severely damaged by mountaintop mining waste," Goodwin said. "In some ways, this is the Appalachian equivalent of Flint, Michigan. As outraged as everyone was by Flint, everybody should be outraged by this."

Rena Steinzor, a CPR member scholar and a professor of law at the University of Maryland, said on a conference call with reporters that the campaign draws momentum from the "Sunset the CRA and Restore American Protection (SCRAP) Act," H.R. 2449, from Rep. David Cicilline (D-R.I.). The legislation would repeal the CRA and seek to reinstate all rules rescinded pursuant to the law.

Gaziano said he thinks CPR and other public interest groups would be more supportive of the CRA if Democrats retook control of Congress.

"There’s no doubt that liberals will use it if they ever control the White House and both houses of Congress, especially after a Republican or a conservative administration," he said. "And that’s exactly as it should be. When that happens, I will look forward to seeing if the groups complaining about the Congressional Review Act will complain then. I doubt it."

Goodwin fiercely disputed this argument, pointing to the "substantially similar" provision. "That’s totally bogus," he said. "If the Trump administration issues a weak Clean Power Plan replacement, how do Democrats use the CRA for that? Then EPA could never issue something stronger because it would be substantially similar."

Still, Goodwin acknowledged that there could be future situations in which Democrats might take advantage of the CRA to repeal socially conservative rules, such as if Trump’s Department of Health and Human Services were to issue a rule limiting access to abortions.

Indeed, the congressional minority is hoping to turn the tables on the GOP majority by using the CRA to restore the Federal Communications Commission’s so-called net-neutrality rules that barred internet service providers from slowing down or blocking online content.

Senate Democrats yesterday filed a discharge petition that gives them a June 12 deadline to vote to reverse the Trump administration’s December repeal of the 2015 rules.

With all 49 Democrats and Maine Republican Sen. Susan Collins supporting the disapproval resolution, Senate Commerce Chairman John Thune (R-S.D.) this week conceded that the absence of cancer-stricken Arizona Republican Sen. John McCain means the measure may be able to squeak through the Senate but would likely die in the House.

The CRA is used "to prevent regulations from taking effect; it basically unwinds overreaching regulations," Thune told reporters. "This would be the first time a CRA would be used to reregulate. It’s without precedent. And there’s no way House Republicans are going to vote for that."

Sen. Richard Blumenthal (D-Conn.) said yesterday that Thune’s point carries no practical or legal significance, given that the FCC’s actions under both the Obama and Trump administrations constituted regulatory actions subject to the law.

"It seems like a distinction without a difference," he said.