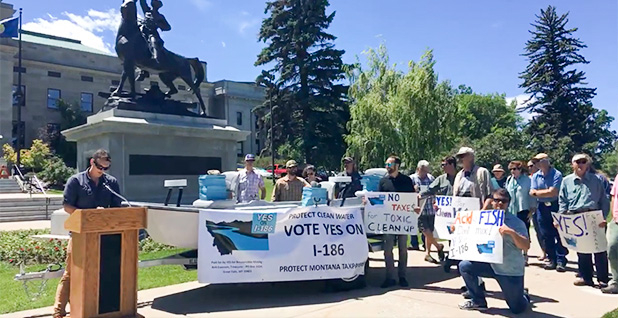 Supporters of a mining ballot initiative in Montana rallied this week at the state Capitol. YES For Responsible Mining/Facebook

A quiet push in Montana fly-fishing shops and farmers markets to tighten the state’s mining rules is about to explode into a potentially multimillion-dollar election-year fight that could affect a high-profile Senate race and offer a road map for other states considering similar restrictions.

"We know that the mining companies are going to come at this with all they can afford to throw at it," said David Brooks, the executive director of Montana Trout Unlimited, who has led the campaign for tighter mining rules, known as Yes on I-186, the name of the ballot initiative. "They have the money and are willing to spend it to pollute water permanently."

Brooks said his group got signatures by placing petitions in fly-fishing and other outdoor shops and having volunteers staff popular weekend farmers markets.

Mining companies, meanwhile, are launching an aggressive attack on the grass-roots initiative. They frame their effort as countering regulatory overreach favored by environmental extremists that would cost the state jobs.

The dueling campaigns kicked into higher gear this week as conservation and environmental groups delivered about 45,000 petition signatures to the Montana secretary of state. Although final certification could take a month, those should be enough to force voters to weigh in via a general election ballot question on I-186.

The groups already have spent hundreds of thousands of dollars, and they could spend millions before November, sources on both sides of the issue say.

"Montana’s mining laws are some of the most stringent in the world, and more than 40 new regulations have been placed on mining in just the past 30 years," said David Galt, the executive director of an industry group recently formed to oppose the initiative, Stop I-186 to Protect Miners and Jobs.

His efforts have focused on rallies and digital ad campaigns, reminding local communities that mining provides some of the state’s best-paying blue-collar jobs.

Industry estimates suggest there are as many as 6,600 hardrock mining jobs in the state, generating $50 million in annual state revenue, though environmental groups argue those numbers are inflated.

The ballot initiative asks voters whether they back prohibiting the state from permitting any new hardrock mines in Montana unless the operators can provide "clear and convincing evidence" that water contaminated by hardrock mining operations will not require "perpetual" treatment.

Hardrock mining refers to underground excavation of minerals such as gold, silver and copper; the restrictions would not apply to coal mining.

If a majority of voters back I-186, the state Department of Environmental Quality would have to legally enforce it.

‘Clean up your mess’

Great Falls, Mont., Mayor Bob Kelly gathered signatures and spoke at a rally late last month urging voters to back I-186. He said Montanans "love" the jobs mining companies provide but don’t want them to leave behind pollution that will harm the state’s waterways and undermine its multibillion-dollar outdoor economy.

"Clean up your mess, it’s something that I learned in kindergarten," Kelly said at the petition drive.

Kelly in an interview with E&E News stressed he is not against mining and said the largely rural state cannot afford to lose any jobs that come with large excavation operations. But, he also said, the most valuable "asset" to his community is its waterways, and plans for a mine near the Smith River, a key tributary to the Missouri River that runs through his city, are behind his calls for strict controls for cleanup.

Kelly’s argument is a local version of the argument that conservation groups are making statewide.

They say the state’s outdoor economy — second only to agriculture, generating $7 billion annually and affecting 700,000 jobs — cannot afford the new risk of mines moving in and harming the state’s legendary angling sites.

"People come here from all over the world to fish our blue-ribbon streams. … Our local economy is becoming more and more based on the outdoor economy," said Dan Gigone, who collected signatures for I-186 at the Sweetwater Fly Shop he owns in Livingston, Mont., along the Yellowstone River.

Backers of the proposal say hardrock mines have a checkered history in the state of creating jobs but ignoring the cleanup. They say the state has 200 abandoned mines that have polluted 2,500 miles of waterway with arsenic, lead and mercury, and left the state with tens of millions in cleanup costs.

Conservationists insist they are not trying to block all mines but want to tighten standards to make sure any new ones coming to Big Sky Country won’t leave behind polluted waters.

They frequently note federal and state regulators have spent more than $30 million cleaning up the Zortman-Landusky, Basin Creek and Beal Mountain mines in southeastern Montana that belonged to the defunct Spokane, Wash.-based company Pegasus Gold Corp. Water treatment at the sites continues to cost $2 million per year.

American Exploration & Mining Association Executive Director Laura Skaer dismisses the talk that I-186 is about responsible mining and believes it is aimed at stopping one project in particular: the Black Butte Copper Project.

Sandfire Resources America Inc. wants to build north of White Sulphur, Mont. The proximity of the project to the Smith River has provoked opposition from local fishermen, backed by national organizations like Trout Unlimited, and has raised angst downstream in Great Falls.

With Black Butte nearing fruition, Skaer sees the initiative as a last-minute attempt to raise the bar.

Mining advocates criticize the vague terms of the initiative.

"Because of how poorly the initiative is written, it portends a ban on mining and sends the message that Montana is closed for business," Hecla Mining Co. spokesman Luke Russell said in an email. "Montana has strong laws protecting water quality and this initiative is simply another attempt by mining opponents to block mining and prevent economic opportunity for the state."

Skaer took issue with the premise that mining engineers and regulators can guarantee perpetual water treatment won’t be required.

"It would essentially end all new mining in Montana," she said. "You’re asking someone to prove a negative. That’s just really difficult. Who is going to put their professional engineering license at risk on something like this?"

Skaer also raised concerns about the inclusion of perpetual leaching from mine sites, which often ranges widely depending on the geology of the ore deposit.

"You do everything you can to button up the mine, but sometimes there’s going to be natural processes that could have discharges that need to be treated," she said.

Skaer said some mines were permitted before major advances in regulations governing the money that mining companies are required to set aside to pay for reclamation in case of bankruptcy. "Initially, those programs didn’t require enough financial assurance, and you learn lessons from stuff like that," she said.

Industry, she said, worked with Montana DEQ and conservation groups to strengthen those requirements.

"The fact that you haven’t had a mine permitted by the Forest Service or the [Bureau of Land Management] since 1990 that’s gone on the Superfund list is a pretty good indication that programs are working today and there’s adequate financial assurance," she said.

But Kirk Evenson, a Great Falls attorney helping to organize the Yes on I-186 campaign, said the "optics aren’t good" for mining companies in fighting standards aimed at clean water.

"Are you going to pollute? Why are they afraid of the standard?" he asked.

Reverberations from the mining ballot could also be a factor in this fall’s Senate and House races.

Political observers say the multimillion-dollar campaign by mining companies could hurt Democrats if they are seen as siding with environmentalists on the proposal.

None of the state’s top Democrats, including Gov. Steve Bullock, has come out in support of it; Republicans have roundly bashed it.

Sen. Jon Tester (D-Mont.), who faces a highly competitive re-election and has cultivated a blue-collar persona popular with the state’s mine workers, declined to wade into the ballot question.

"I have not spent any time studying it, to be honest with you. Once they get the signatures, I will look at it and I’ll let you know," Tester told E&E News recently.

He said he was more focused on moving far less controversial, bipartisan legislation that would restrict mining in a large area just north of Yellowstone National Park.

Montana Republicans in the past have used threats of environmental laws, including the impact of President Obama’s Clean Power Plan, to try to win over communities reliant on mining. The Tester race is expected to be tight, and a wedge issue like I-186 could help Republicans peel off some mine workers and independent voters who might otherwise favor the incumbent.

Montana State Auditor Matt Rosendale, the Republican running against Tester, told E&E News recently that he would fight the ban and raise the issue on the campaign trail.

"It’s an attempt to shut down what hardrock mining we have remaining in the state," said Rosendale, who said he offered a similar message at a meeting of the Montana Mining Association last month.

First-term Rep. Greg Gianforte (R), who faces a competitive re-election and occupies the state’s only House seat, also opposes I-186.

"I think we can continue to develop resources, including through hardrock mining, and still protect the environment," he told E&E News recently.

His opponent, Democrat Kathleen Williams, who has a long track record working on water conservation issues in the state, declined to take a position, saying the matter should be left to voters.

Williams added, "I don’t think they’ve intended it as a complete ban. I think it’s a great public discussion to have."

Mining advocates worry that if the initiative were to succeed in the Treasure State, it could be pitched elsewhere.

Environmentalists say that is not their goal. They note similar ballot initiatives to set more stringent hardrock mining standards have been supported in Maine, Michigan and New Mexico.

Legislation similar to the language in the initiative has been floated, thus far unsuccessfully, in Montana and Colorado.

"There are groups out there who are just anti-mining," she said. "They oppose every mine, and if this thing passes in Montana … I can see this popping up in other states."