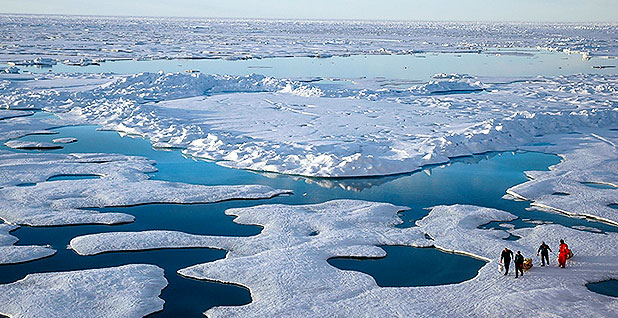 National Oceanic and Atmospheric Administration scientists explore the Arctic during a 2005 mission. Photo courtesy of NOAA.

Part one in a three-part series.

When it comes to making accurate weather forecasts, scientists consider the Arctic to be the least-understood but fastest-changing region in the world.

Because few people live there and most of the Arctic’s surface consists of oceans covered with rapidly thinning ice, many of the factors that dictate weather conditions — including the impacts of sunshine, clouds and rapidly rising temperature fluctuations in the lower atmosphere — remain mysteries. They make the region one of the frontiers of climate science.

The computer-driven climate models used to forecast weather changes in the world are full of voids and guesstimates about how the Arctic region’s weather is produced.

"We need models that come closer to reality with good physics," explained Gijs de Boer
, a researcher with the Cooperative Institute for Research in Environmental Sciences (CIRES)
in Boulder, Colo.

He recently led a small team of American scientists to Oliktok Point
, a remote government research station perched on the coast of Alaska’s North Slope, in an attempt to fill in some of these yawning research gaps.

Most previous attempts to create what are called "profiles" of the Arctic atmosphere have been done with manned aircraft and weather balloons, but de Boer’s team came equipped with better tools: drone aircraft. The drones are designed to fly consistent patterns carrying instrument packages that can explore the most turbulent area — within a mile over the surface.

In theory, the data from the drones would help scientists piece together the interactions involving clouds, heat, moisture and aerosols — including particles of dust, sea salt and man-made pollutants — that brew the region’s weather. The result would be more accurate, long-term weather predictions that might suggest answers to the big weather, geopolitical and economic questions posed by what the accelerating warmth of the Arctic is bringing to the rest of the world.

The team’s plan called for a rigid schedule of hourly flights for 12 hours a day over two weeks, and, initially, almost nothing about it worked, beginning on Aug. 5, 2015, when three scientists formed at the end of a runway at Oliktok to launch their initial drone. Then they noticed a reddish-brown grizzly bear prowling on the tundra nearby. They headed for a building because the bear, which they came to call "Cinnabun," seemed intent on researching them.

Cinnabun made frequent appearances but was the least of their problems. A bigger one was high wind that sometimes tossed around their two small, lightweight plastic foam drones, driven by electric-battery-powered propellers, like so many poker chips.

The drones, called "DataHawks," were built by the University of Colorado’s Department of Aerospace Engineering Sciences
, where most of the experiment’s team came from. The planes have a 39-inch wingspan and cost less than $1,000 apiece. De Boer estimated that, without them, their mission would have been impossible because using piloted aircraft would have been far too expensive and risky, and balloons can cover only a small area and are not reusable.

But then the team found that occasionally, when the winds died down, the DataHawks, which had been thoroughly flight-tested in Colorado, often went haywire within five minutes of launch. They ignored the predetermined flight patterns from their autopilots and returned for rough landings on the tundra. A three-man team — one carrying a shotgun to protect against Cinnabun — went to retrieve them.

Two days and 53 dismal flights later, de Boer wrote in his blog: "The reality of field work is sometimes an ugly one."

His team had planned for bears, but it hadn’t developed a plan for an aging Air Force radar facility located at Oliktok, whose powerful beam was interfering with the DataHawk’s guidance system.

The mystery of Arctic clouds

The radar is a veteran of the Cold War, part of an earlier spasm of interest in the Arctic by the U.S. military, which constructed the "DEW Line,"
a chain of "Distant Early Warning" radars to detect Russian bombers that might be launched over the North Pole. Although de Boer’s team tried to shield DataHawk’s controls from the powerful beam by using aluminum foil, that didn’t help.

Innovation has always been part of successful Arctic science ventures, starting in the 1930s, when the Soviet Union built "ice camps" on Arctic Ocean sea ice, facilities that were usually made of plywood and expected to house a team of scientists for a year. The Russians used bicycle-powered generators for electricity, according to Taneil Uttal
, an Arctic research team leader for the National Oceanic and Atmospheric Administration
.

In the 1990s, as the Soviet Union collapsed, the Russian researchers had trouble finding money to support their ice camps. "Now Russians can’t find enough ice to do it safely anymore," explained Uttal.

In April 1998, researchers found another way to study the Arctic’s changes by going out to sea above Alaska in a Canadian Coast Guard ship, which was then deliberately frozen into the Arctic ice to drift with it in a circular pattern for a year. The idea was to supply the ship and rotate visiting scientists on board using de Havilland Twin Otter planes
equipped to land on the ice.

"We had a little bit of a crisis," recalled Uttal. "Our predictions were incorrect," and the path of the ice drift pushed the Canadian ship beyond the range of the Twin Otters. A U.S. Coast Guard icebreaker came to the rescue, and Uttal and other scientists on the research team came back with a load of valuable data about clouds and sea ice.

After frantic days and nights looking for ways to overcome the radar problem, de Boer’s team finally succeeded in getting more flights aloft. The DataHawk is launched in slingshot fashion by using a 30-foot length of rubbery surgical tubing.

The controllers found they could manually steer it up quickly through the beam to 1,600 feet, where the radar beam’s strength seemed to ebb. That got the DataHawks into an area where they could gather vital data from the clouds, but it was too risky: There was no way to manually guide the drones back down if the controllers lost sight of them.

Clouds in the Arctic are like character actors. They play different roles in impacting the weather depending on how much ice they contain. Some clouds have lots of water, and others have varying degrees of ice crystals. And sometimes the water they hold doesn’t freeze at temperatures well below 32 degrees Fahrenheit because ice crystals need tiny airborne particles from the aerosols to form around, and Arctic air is sometimes too clean to provide any.

Because clouds are often treated the same way in climate models, finding ways to model all these differences were among the puzzles de Boer’s team spent 14-hour days determined to solve.

On the one day when the DataHawk’s autopilot seemed to be working, a thick, cold layer of ground fog moved in, making visibility at Oliktok so obscure that the drones couldn’t be launched.

"Sometimes," de Boer noted, "you just have to accept the fact that the weather can win and there’s nothing you can do about it."

Pilatus takes to the skies

But his team didn’t give up. It returned to Alaska on April 2, 2015, with two upgraded DataHawks and a larger, more sophisticated drone called Pilatus designed to measure more of the peculiar Arctic conditions. Landing in Anchorage, de Boer was thrilled to read a weather forecast predicting good flying conditions at Oliktok, but when the team arrived, it experienced two straight weeks of 20- to 50-mph winds that blew the snow right off the tundra.

"This was not really in the forecast at all!" de Boer wrote in his blog. "I guess that’s part of the reason we’re up here."

More familiar puzzles were there to greet them: a polar bear who left pie-plate-sized footprints along a nearby beach and the radar beam that continued to turn DataHawks into airborne zombies.

Then, on a Sunday morning, the winds settled down, the sun came out and they launched Pilatus, their alternative drone with a bigger package of instruments designed to tell them more about clouds.

It flew precise, race-track-like patterns until it sent them an unexpected signal that it was going to put its nose down and land because it had suddenly lost power. Pilatus selected a landing site 100 yards away on the frozen sea. Two pilots and a bear guard went off in a truck to fetch the drone, and a cursory examination of the plane showed nothing was wrong.

"Given the uncertainty surrounding the cause of the propulsion failure, we made the decision to stop flying for the campaign and began packing up to head home," de Boer recorded in his blog. (Researchers later found that the Air Force radar had triggered a safety system on the drone, one that was designed to prevent accidents to technicians working on the propellers.)

De Boer’s team, which was supported by the Department of Energy, made one more try, visiting Oliktok in October. This time, the radar problem was fixed, and as daylight waned, the team watched the drones’ light-emitting diodes flash as they zipped less than 60 feet above the ocean, measuring big columns of heat released by the water as winter ice began to form.

This time, the ground-based team remained in control. Instead of five-minute flights, these lasted almost an hour. In all, the drones flew for 17 hours.

"Repeating these flights under different atmospheric states and ice conditions should provide a really nice data set for evaluating the lower atmosphere in an environment that is otherwise really difficult to sample," de Boer blogged.

The eventual effect should be more accurate climate models, but one immediate result of his team’s efforts was that de Boer was among 106 scientists to receive a Presidential Early Career Award for Scientists and Engineers
from President Obama in 2016. His was "for fundamental contributions to the understanding and modeling of Arctic atmospheric processes and their impact on global climate."