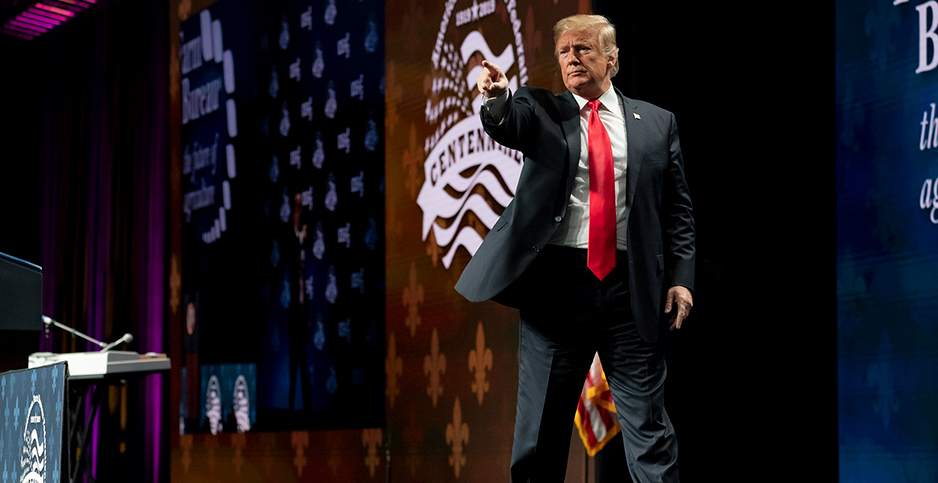 The Trump administration is expected to finalize a rule limiting which waterways are protected by the Clean Water Act this month, with some speculating the regulation could be unveiled as soon as Friday.

Both President Trump and EPA Administrator Andrew Wheeler are scheduled to speak at the American Farm Bureau Federation’s annual meeting in Austin, Texas, this weekend. Trump is scheduled to appear Sunday, and Wheeler will speak on Martin Luther King Jr. Day, leading to speculation that the administration might time its release of the final Waters of the U.S., or WOTUS, rule with the conference.

The agriculture trade group has been one of the strongest advocates of EPA and the Army Corps of Engineers as they work to redefine and restrict Clean Water Act protections. In addition to working on its own definition of WOTUS, the Trump administration this fall repealed the Obama-era Clean Water Rule, which sought to clarify which wetlands and waters were federally regulated.

The Trump WOTUS rule, as proposed in December 2018, represents an unprecedented rollback of Clean Water Act protections that predate the Obama administration, including some that date back to the 1980s. While it remains to be seen what changes are made in the final regulation, the proposal would eliminate protections for more than half of the nation’s wetlands, as well as the more than 18% of streams nationwide that flow only after rainfall (Greenwire, Dec. 11, 2018).

Trump has spoken at the farm bureau’s annual convention the past two years. Each time, he has touted his administration’s efforts on the WOTUS rule.

"We’re saving farmers and ranchers from one of the most ridiculous regulations ever imposed on anybody in our nation: the Waters of the United States rule," he said last year. "Disaster — other than the title. Such a beautiful title. It was a total kill on farmers, on builders, on everybody. It was a total kill. Sounds so nice."

Wheeler, for his part, has made a practice of unveiling important regulatory initiatives at industry group events.

This fall, he signed the final rule repealing the Obama-era standards at the headquarters for the National Association of Manufacturers, which also supported the effort (E&E News PM, Sept. 12, 2019).