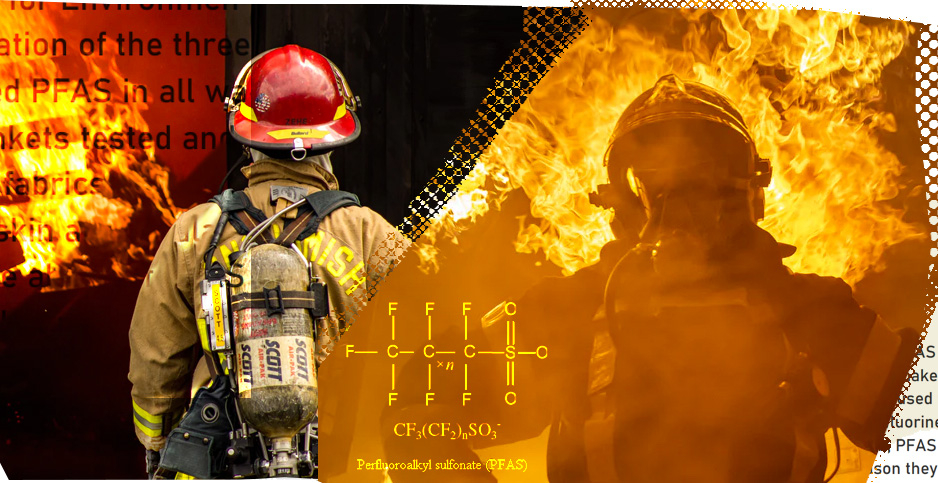 Firefighters want the option to wear protective gear that doesn’t contain toxic chemicals. The only problem? The very garment manufacturers whose gear contains PFAS sit on the standard-setting committee they must convince.

Firefighters have grown increasingly concerned with per- and polyfluoroalkyl substances (PFAS) in their "turnout gear" — firefighters’ personal protective equipment — over the past year because the chemicals are highly toxic and linked to a wide variety of health problems even at very low levels. They include cancer, which is the biggest line-of-duty cause of death within the fire service, due to toxic smoke encountered when battling blazes.

But purchasing turnout gear without PFAS is nearly impossible because rules from the National Fire Protection Association require some fabrics used in the gear to withstand 40 consecutive hours of harsh ultraviolet light, and only textiles containing PFAS are able to pass that test (Greenwire, Feb. 16).

Now, concerned firefighters are proposing that NFPA eliminate the test after an E&E News investigation revealed its connection to PFAS in turnout gear, arguing that the tests are not representative of real-world conditions.

A vote to remove the test is ongoing, with one key committee tally set for tomorrow.

But many members of the committee who have already expressed opposition to changing the standard represent some of the same gear manufacturers that have consistently misled firefighters about the dangers of PFAS in turnout gear by distorting solid science.

"They are in a serious long-term relationship with these chemicals, and the last thing they want to do is get rid of them," said Jim Burneka, a member of the Dayton, Ohio, firefighters union who was diagnosed with thyroid cancer earlier this year.

Repealing the test would allow use of PFAS-free fabrics for moisture barriers.

"We are exposed to enough carcinogens throughout our career, our gear shouldn’t be one of them," Burneka said. "Having the option of choosing if I want to have these chemicals in my gear or not is paramount to me."

NFPA standard-setting committees are voluntary, and members consist of industry consultants, textile and gear manufacturers, and representatives of fire departments. NFPA rules state that each group cannot constitute more than one-third of any committee to prevent any bias in the standards. But firefighters have long alleged that consultants, who often contract with manufacturers, can’t be objective.

The UV light test is an ideal example of that dynamic.

Added to the NFPA rules in 2007, it was meant as a response to a series of moisture barrier failures in the 1990s, when rapidly deteriorating fabrics were recalled because firefighters had suffered horrible burns when their water-soaked gear heated up.

The test was proposed to NFPA by University of Kentucky textiles professor Elizabeth Easter, who has worked with PFAS manufacturers and whose laboratory was established thanks to a $50,000 donation from Lion Apparel, one of the largest manufacturers of firefighting gear, that was matched by the state.

She told an NFPA subcommittee last month that she based the test on a student’s master’s degree thesis from 2000.

"We were able to replicate the damage to the product that was causing the failure," she said, adding that the thesis "was conducted in the format at which the damage was being seen."

An E&E News review of that thesis, which has never been made public before, shows that it does not support the 40-hour UV light test.

The document, written by then-master’s student Chastity Newsome, describes how she took samples of turnout gear made by different manufacturers and exposed them to various stressors to see when the moisture barrier would degrade.

In some cases, full-three-layered garments were exposed to artificial and natural sunlight, while in others only the moisture barrier was exposed. Some samples were exposed to the light after being washed; others after they had been washed and dried; and still others after they were washed, dried and exposed to heat. Some samples were also "flexed" in an attempt to replicate the wear and tear garments would go through.

All samples eventually failed tests of their permeability, after exposure to different amounts of light and other stressors.

Newsome’s paper concluded that ultraviolet light contributes to the degradation of moisture barrier fabrics and recommended NFPA create a standard where only moisture barriers are exposed to artificial light. But it also divulges that a statistical analysis of the various tests "did not show significant results."

That raises questions about why NFPA chose to adopt a standard based on a study without statistically significant findings.

"This does not support the use of the light degradation for the moisture barrier," said Kyla Bennett, science policy director at Public Employees for Environmental Responsibility, who represents some firefighters concerned by PFAS in their gear.

Because different types of moisture barrier fabrics were exposed to different stressors, rather than each type of fabric being exposed to various combinations of light and stressors, it is hard to draw any conclusions about what caused the degradation Newsome observed.

"Those single layers aren’t the ones that are out there being exposed," Bennett said. "This is not strong evidence that they need this light degradation test."

Easter said in an email that exposing moisture barriers directly to light is consistent with how the material is impacted in the real world and was merely "an accelerated method to replicate the damage seen in the field."

Though Easter is the one who proposed the NFPA requirement that moisture barriers be directly exposed to ultraviolet light for 40 hours, she shifted responsibility for the standard. "The NFPA Committee made the decision to use the thesis," she said.

Jeffrey Stull is a firefighting consultant and the only member of the NFPA committee to object to the UV light test back in 2007. He said he doesn’t remember ever seeing Newsome’s thesis back then or being told that the test was based on such a study. He "disagreed with the methodology" of the test because it directly exposed moisture barriers to UV light, rather than exposing them as part of a three-layer garment as occurs in the real world.

His experience as an expert witness in a lawsuit over the faulty moisture barriers led him to believe the failures were caused by manufacturing production errors, not ultraviolet light.

"The root cause identified wasn’t the right cause, and I don’t think the test was the right corrective action," he said.

Some concerned firefighters suspect Lion Apparel may have played a role in the test’s adoption given that the test was conducted as part of the textile program Lion established.

Newsome’s acknowledgements section offers "a great thanks and appreciation" to Lion Apparel "for their interest in this research."

"Without their support this study would not have been feasible," Newsome wrote.

Easter told E&E News that Lion Apparel "assisted us with the direct sunlight exposure" and that "the thesis was written independent of Lion Apparel’s input." She did not provide further details.

Lion spokesman Gene Grabowski said the UV light test is "unrelated to the PFAS issue, which had yet to surface at that time."

But firefighters are wary of the connection because when they have asked turnout gear manufacturers about the inclusion of PFAS in their gear, they have often been misled with statements that minimize PFAS’s known health effects and distort solid science to claim firefighters aren’t exposed from their equipment. That includes statements from representatives of Lion Apparel, who have previously claimed that studies show lower levels of PFAS in firefighters’ blood than the general population, when the opposite is true (Greenwire, Feb. 17).

"When I saw that acknowledgement, it just made me sick to my stomach," Burneka said. "We’ve been basing these tests off of science that was influenced by industry."

Asked about firefighters’ distrust, Grabowski wrote in an email, "Firefighters need to know that we have always shared the most accurate, up-to-date information available about turnout gear."

Stull said there was no indications that industry was involved at the time.

Stull sits on the NFPA subcommittee that is deciding whether to eliminate the test. Three-fourths of the 36 subcommittee members will need to vote yes to advance the proposal.

Eliminating the light test, he said, is "probably one of the more volatile topics" that the subcommittee has considered. A preliminary tally taken earlier this month shows roughly one-third of members oppose eliminating the test and another third agree with it, leaving about a dozen members undecided.

The vote will be finalized tomorrow and then be open for public comment before the committee votes a third time in August. The comments and the August tally will then be sent to a Standard Council to make a final decision.

Those opposed include Lion Apparel’s representative, Vice President of Innovation and Product Management Karen Lehtonen. Her comments to committee members once again misstate solid science about the potential dangers of PFAS.

Specifically, she wrote: "The [Centers for Disease Control and Prevention] states that the risks of dermal absorption from PFAS are very low. Based on a review of extensive research, [the Agency for Toxic Substances and Disease Registry] stated in its most recent guidance for clinicians, ‘Dermal absorption of PFAS through the skin is limited and is of minimal concern as an exposure route.’"

But that CDC guidance Lehtonen cites is describing the risks to the general public of showering or bathing in water containing PFAS at far lower levels than firefighting gear has been shown to shed. The same document says, "Workers may be exposed to PFAS by inhaling them, getting them on their skin, and swallowing them."

Separately, the CDC has said that some PFAS "permeate both mouse and human skin."

Asked about the discrepancy, Grabowski said Lion believes it is "accurately quoting" the CDC’s statements and said studies showing that PFAS can migrate out of turnout gear and onto human skin are "theoretical" and "not relevant."

Overcoming industry opposition will be a heavy lift for firefighters wanting to get PFAS out of their gear. But this time they have a new ally: the International Association of Fire Fighters union.

IAFF officials had previously downplayed the risks to firefighters from PFAS in their gear.

Union members voted in January to stop IAFF from taking money from gear manufacturers. They also voted in a new union president who is focused on the issue and hired a new director for science and research with background on the topic.

Now, IAFF is a primary sponsor of the proposal and is sending emails to its members urging them to file public comments supporting it. That could prove critical to swaying the Standards Council this fall.

While that council often follows the lower committee’s recommendation, Stull said it has been known to disagree when there is significant public input from stakeholders.

"It would be hard to judge what’s going to happen with this one," he said.

IAFF Director for Science and Research Derek Urwin told the NFPA subcommittee last month that moisture barriers are "a possible exposure of PFAS to firefighters."

"Alternatives need to be vetted and considered, and the UV test is an obstacle to that effort," he said. "We feel strongly that this is an issue that has to be addressed for firefighter health and safety."