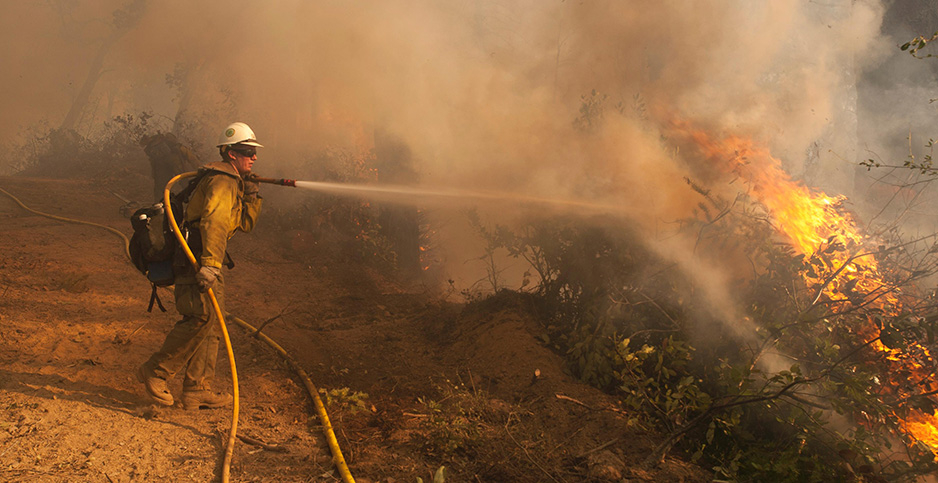 A firefighter working the fire line at the Happy Camp Complex Fire in the Klamath National Forest in California. Kari Greer/U.S. Forest Service

Climate change has exacerbated wildfires throughout America, and it’s testing the people who fight them.

Outdated stereotypes of firefighters flipping flapjacks at the station and washing trucks have been replaced by dangerous calls into drier terrain to battle intensifying fires all year round.

Climate change is a key factor. But some firefighters shy away from publicly connecting broader environmental issues to the growing inferno, choosing instead to focus on the glaring season ahead of them. As the planet gets warmer, though, some researchers think firefighting agencies will need to do a better job of incorporating climate science — for strategic and budgeting purposes and for the safety of the men and women on the front lines.

"Fire service has been slow to educate the public about what the impacts of climate change are," said Eric Peterson, the fire chief in Santa Barbara County, Calif., which was scorched by last year’s Thomas Fire. It was the largest blaze in California’s history.

Yet federal fire agencies are not exactly sounding the alarm on climate change.

"We are not climate scientists," said Randy Eardley, chief of external affairs at the National Interagency Fire Center, which coordinates U.S. policy for wildland fires. "We talk about the effects we are seeing."

Those effects have been striking. In the last 33 years, the number of acres burned on private and public land in the United States has grown from about 3 million acres to 10 million acres. During that time, the federal cost for fire suppression has increased from $240 million to $3 billion.

Fire season is no longer a season; it is year-round. One factor is persistent drought conditions in the West, contributing to a sharp increase in dry tinder to fuel the blazes. Fire behavior at night has been more erratic. And in some regions, the snowpack is melting earlier in the year, allowing brush and shrubs to dry out in the spring.

Scientists are careful not to attribute any one wildfire to global warming, "but it sure looks like climate change," said Max Moritz, a wildfire specialist in the Environmental Science, Policy, & Management Department at the University of California, Berkeley.

Several fire experts also stressed the expansion of the "wildland-urban interface" — which occurs when people live in particularly fire-prone areas.

This summer’s 416 Fire in Colorado, which burned 54,000 acres, offered a classic example of some of this new fire behavior, said Julie Korb, a biology professor at Fort Lewis College. "The firefighters’ main focus was protecting homes and human life, and then they basically pushed it into the wilderness," she said.

Because the fuels were so dry, they "knew they wouldn’t be able to fight that," Korb said.

Historically, firefighters have made progress at night by adhering to the "10 a.m. rule."

"That was their chance to get a hold of that fire — before the winds were picking up," Korb said. The nighttime window is less available now because fire behavior is changing. That gives firefighters fewer opportunities to use management techniques like backburns, making it more difficult to make a direct attack on the flames.

"The biggest thing is seeing fire behavior that is so erratic — things are happening at a faster rate," Korb said. It’s not that the behavior is entirely new; it’s just happening more often.

‘They are living it’

As technology such as GPS and smartphones has improved, firefighter fatalities have decreased. In 2008, there were 25 firefighter deaths nationwide, federal records show. Last year, there were 14.

"Their crew bosses are going to be saying, ‘Look, we are dealing; we are in a different situation,’" Korb said. "It’s important for them to understand why that is happening."

Eardley said that while the "operational, tactical and strategic elements" of firefighting have not changed, there is an increased focus on safety and fatigue factors.

"Safety has generally always been stressed, but I think it’s even more so the case today," he wrote in an email.

Pat McElroy, retired fire chief of the city of Santa Barbara, said firefighters do talk about climate change. "They are living it," he said, emphasizing that during last year’s Thomas Fire, humidity levels were at 1 percent.

But the politicization of climate change has stopped fire chiefs in some areas from publicly addressing the issue.

"I don’t think we would get into the cause of it, because from our perspective, the long season is relevant," said Rick Swan, director of wildland fire fighting safety and response at the International Association of Fire Fighters. "The cause is irrelevant. The damage is done."

Swan said that in a state like California where climate change is "confirmed science in their opinion," using the term is common among fire professionals.

"Maybe in other states that lean Democrat, it would be along the same lines. Maybe the states that lean Republican would not say those things. I couldn’t tell you," he said. "The departments in of themselves most likely would not be making those policy statements. Those would be coming from the government."

While the use of the term "climate change" may vary, the real question is whether fire agencies are incorporating fire science into their strategies.

He compared firefighters dealing with climate change to farmers dealing with the widespread drought. Firefighting strategies will have to change, like how farmers change crops or alter water regimes.

"They will have to grapple with it, regardless of what you call it," Moritz said.

After all, firefighters used to do preventive work during the off-season.