Fires choke utility and U.S. asks: Who pays for warming? 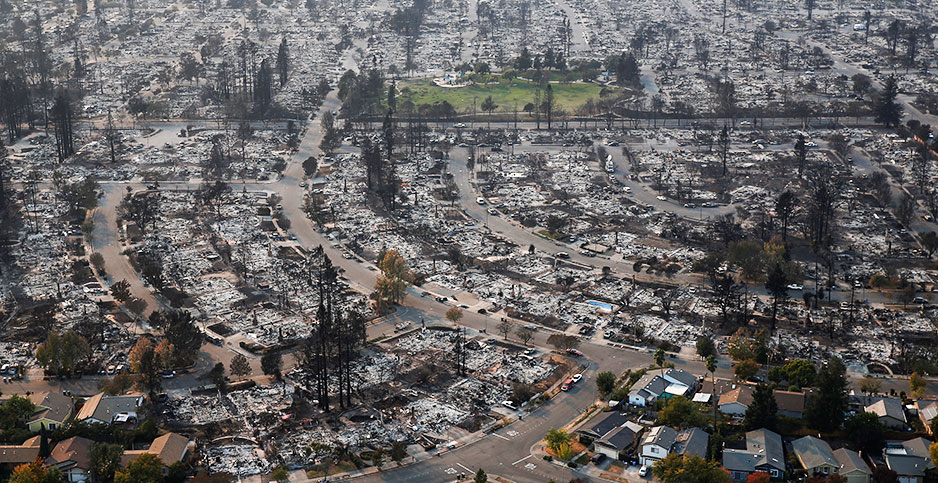 An aerial view of Santa Rosa, Calif., after it was destroyed by the Tubbs Fire in 2017. Stephen Lam/Reuters/Newscom

In the summer of 2017, before a series of wildfires ripped across California’s wine country, killing 44 people, incinerating thousands of homes and causing $9.4 billion in damage, Pacific Gas and Electric Co. was riding high.

The San Francisco-based power company had recently resolved a lawsuit stemming from a 2010 pipeline explosion. Moody’s Investors Service had just upgraded the company’s credit rating. And the company’s stock was trading for more than $60 a share.

Two years later, PG&E is headed for bankruptcy, its senior executives departed and balance sheet torched by a pair of unprecedented wildfire seasons. California investigators have tied at least 17 major wildfires to PG&E in 2017, and a downed PG&E power line is suspected of having caused the deadly 2018 Camp Fire north of Sacramento. The company now faces up to $30 billion in fire liabilities, a sum that exceeds its assets and insurance (Energywire, Jan. 14).

While much of PG&E’s fall can be linked to the company’s faulty safety record, analysts say the risks posed by climate-charged disasters threaten to overwhelm even the best-run companies, along with the insurance systems and governments that underpin them.

"The fact that all these liabilities were incurred in something like 18 months, two fires season basically, really illustrates the rapid onset of climate and other severe disruptions to the electricity grid that we really aren’t used to," said Alex Gilbert, the co-founder of the SparkLibrary, where he tracks the energy sector. "That’s not a risk the utility industry is traditionally prepared to deal with."

The risk isn’t limited to the power sector. Insurers are feeling the strain of paying out homeowner claims after the two unprecedented fire seasons in California. Flooding caused by two recent hurricanes led to concerns about pollution from hog farms in North Carolina and refineries along the Gulf Coast. Warming oceans prompted the storms to linger longer and drop more water.

PG&E’s case is unique in that its sparking transmission lines have been cited as the cause of the deadly blazes, analysts said. The link between company and disaster is rarely so clear.

But the California utility is hardly the only company operating a transmission system in the West, where wildfires are a persistent concern. Energy companies operating in areas prone to hurricanes and flooding face similar challenges.

"What climate change does is gradually change the distribution of risk. Maybe it makes more extreme in some ways, and less extreme in others," said Michael Wara, a senior researcher at Stanford University’s Woods Institute for the Environment. "But it is gradually pushing risk outside the bounds of what the system was designed to manage."

The immediate challenge facing California officials is how to manage the PG&E bankruptcy and cover the damages incurred by the recent fires. Yet the long-term challenges may be even more daunting.

They are twofold. One is managing the risk associated with climate disasters. The other is paying for the mitigation measures that can reduce those risks.

PG&E is instructive of the challenges in both cases. In a rate case filed with state regulators in December, the company said it plans to spend $5 billion between 2018 and 2022 on its Community Wildfire Safety Program, replacing wooden power poles, insulating transmission wires, clearing vegetation, and installing cameras and sensors to quickly identify fallen power lines.

Then there is the cost of insuring against future climate risks. PG&E’s annual insurance premium is $1.4 billion. Yet its coverage remains inadequate for covering its present liabilities.

"If you have climate change damages and a company can’t pay, either private individuals or the government is going to have to step in," said Ann Carlson, a professor of environmental law at UCLA. "I don’t think this is an isolated incident."

‘Every state is going to have this question’

Traditionally, safety and insurance costs incurred by a utility would be passed onto consumers in the form of higher electric rates. A 2017 law ensured California utilities could pass along wildfire costs to their customers.

But the prospect of mounting climate catastrophes raises questions about the traditional model for utility regulation and the need for new mechanisms to manage risk and pay for mitigation, analysts said.

"We’re seeing states all over the country act to reduce greenhouse gas emissions and plan for a low-carbon future. But what I don’t think people realize is how fast we need to adapt to climate change and its effects," said V. John White, executive director of the Center for Energy Efficiency and Renewable Technologies, a Sacramento-based think tank. "It’s no longer our grandchildren who have to deal with this. It’s us. Whether it’s fire risk in the West or hurricane risk in the Southeast, it is clear climate change is catching up with us, and we need to take extraordinary action to adapt."

He suggested imposing a fee on carbon polluters to raise revenue for adaptation projects, in addition to California’s cap-and-trade program. Others have proposed establishing an insurance pool to handle fire risk. And still others argue the companies that helped cause a rise in carbon emissions should be held liable for paying the costs associated with a warming world.

PG&E’s transmission wires may have sparked California’s deadly wildfires, but oil companies and other large polluters helped produce the increase in carbon emissions that led to the state’s crushing drought, said Richard Wiles, executive director of the Center for Climate Integrity.

"The question might be asked, if you’re PG&E, is why just us? We might have been liable because of sparking transmission lines. But what about the underlying conditions that make the place blow up?" Wiles said. "It doesn’t make any sense to limit the liability to PG&E. They are not the only party that set these forests up to be ready to burn."

The legal case for making oil companies shoulder climate liabilities remains dubious, said Severin Borenstein, director of the Energy Institute at the University of California, Berkeley’s Haas School of Business. What is not in question, he said, is the need to start planning for a future in which climate-fueled disasters are common.

In California’s case, power companies’ obligation for fire mitigation will need to be weighed against the risk incurred by homeowners who chose to live in fire-prone areas, Borenstein said.

"I think every state is going to have this question, and we need to figure out a way forward," he said. "We are sort of being reactive as these things get worse and worse. What is happening now is a bigger outcome than what happened a year ago. Who knows what next year is going to be like?"