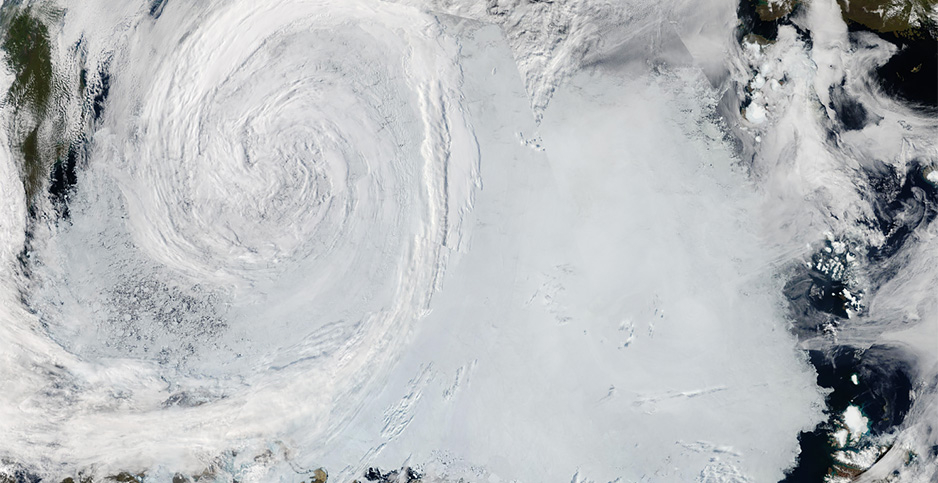 An image of an Arctic cyclone was captured by NASA this week. The storms can accelerate low ice conditions in the fast-warming North. NASA/Zachary Labe/Twitter

Arctic sea ice hit an all-time low for July against a backdrop of record-breaking temperatures and raging wildfires at the northern reaches of Earth.

Then a cyclone began swirling over the thinning ice this week.

Taken together, those conditions have made scientists concerned about what the rest of the season may hold as thousands of miles of sea ice melts away every day.

Ice cover in the Arctic Ocean hit an all-time low for this time of year on July 15, according to the National Snow and Ice Data Center. Sea ice was disappearing at a rate of more than 56,400 square miles a day earlier this month compared with the typical rate of 33,000 square miles.

Satellites have never seen so little ice in July.

The Siberian coast has been hit hardest. The Northeast Passage, a shipping route along the Russian shoreline, was ice-free two weeks ago.

Sea ice typically continues to melt in the Arctic Ocean through the summer, hitting its lowest point in September, before it begins to refreeze. Given the remarkable season so far, some experts have speculated that it could reach an all-time low in September.

That record was last broken in 2012, the most extreme year in history for Arctic ice cover. Sea ice extent that year was 18% lower than the previous all-time low in 2007 and nearly 50% lower than the average between 1979 and 2000.

Unusually hot and sunny conditions have primed the region for a big melt. In June, a persistent high-pressure system — a kind of swirling atmospheric current often associated with clear, sunny skies — set up camp over the Siberian Arctic. Temperatures soared, culminating in a shocking 100-degree Fahrenheit day in the town of Verkhoyansk, Russia.

It was the first time that ever happened.

The high-pressure system eventually drifted off the Siberian coast toward the central Arctic Ocean. Once there, it accelerated the melting of sea ice.

Faster melting tends to become a self-reinforcing system in the Arctic. As the ice disappears, patches of open ocean absorb more sunlight and heat, further warming the water and melting more ice.

Water temperatures along the Siberian coastline, in particular, have been abnormally high this summer.

Then, this week, scientists flagged another threat to the ice. A swirling cyclone has brewed over the western Arctic Ocean for the last few days, sparking concerns that the storm could break up the sea ice and cause it to melt even faster.

Arctic cyclones aren’t uncommon — they happen all the time. But this storm was unusually strong for July and raised warnings about the impact of a similar cyclone in 2012 that some scientists say helped cause record melting that year.

Still, there’s reason to be cautious about making predictions for the rest of this year, scientists say.

For one thing, a study found that the record melt in 2012 would have happened with or without the cyclone. And other research suggests that Arctic cyclones can have complicated effects on sea ice, sometimes speeding up melt but also sometimes slowing it down, depending on other weather conditions.

It’s likely too soon to tell how this storm may affect dwindling sea ice, said Arctic cyclone expert Erika Schreiber at the University of Colorado, Boulder.

In the summer, Arctic cyclones tend to cool the local climate. This means they can sometimes slow the rate of ice melt, at least temporarily.

On the other hand, strong storms can substantially break up the ice, potentially leaving it more vulnerable to higher temperatures and faster melting later in the season. And they can churn up the ocean, as well, allowing warmer waters to rise to the surface.

"I wouldn’t be surprised if this storm has a substantial impact, mostly because the ice has already been melting so much and that it’s already much weaker from the very warm conditions that the region has seen this summer," Schreiber said in an interview.

But, she added, it’s still relatively early in the season.

"Sea ice is very affected by weather patterns, and there’s still a lot of time for something else crazy to happen," she said.

Zachary Labe, a climate scientist at Colorado State University, noted that this year’s events aren’t a direct parallel to what happened in 2012.

Many scientists have suggested that an unusually intense cyclone damaged the ice in 2012 and contributed to the astonishing record low extent in September. But that cyclone was abnormally persistent, lasting about two weeks, while this week’s cyclone is fizzling out after just a few days.

And some research suggests the storm may not have played as much of a role as experts believed at the time. A 2013 study in the journal Geophysical Research Letters investigated the question with model simulations. It found that the 2012 storm did help reduce sea ice concentrations but that the record low in September would have happened anyway.

Still, Arctic cyclones are worth keeping an eye on in the future. Some data suggests their influence on sea ice may be changing as the region continues to warm.

Decades ago, when the satellite record began, the cooling effect of Arctic cyclones seemed to have a bigger influence on sea ice than it does today, Schreiber pointed out. They used to slow down the ice melt to a greater extent.

"But that’s becoming less true," she said. "And I am guessing that that is mostly due to the sea ice thinning and generally already just losing area."

For now, the unusual weather patterns and extreme heat around Siberia are the most notable aspects of this Arctic summer, Labe said.

The long-lasting high-pressure system, the extreme temperatures, the wildfires, the warm ocean waters and the disappearance of sea ice along the Russian coast are all remarkable events. And they all point to the profound fingerprint of climate change in the Arctic.

That’s true even if this September fails to top the 2012 record for having the least ice. Some early projections suggest there probably won’t be a record low in September.

But that’s no cause for relief.

"To me, I think any time of the year, sea ice is a record low is impacting climate and ecosystems in the Arctic," Labe said. "This July will be the lowest July on record, and it had substantial impacts on the ocean and surrounding land in Siberia. So I think we should focus on that more than the annual minimum, per se."

And even without a record minimum in September, this summer’s events may prime Arctic sea ice for a rough fall and winter.

"With the ocean warming up so much along Siberia, it would not surprise me if the sea ice takes longer to re-form in the fall, because there’s been so much heat building up," Labe said.

And this, in turn, could set the region up for even more declines next summer, Schreiber noted. If sea ice takes longer to form in the fall, it may not grow as thick in the winter. And thinner ice is likely to break up more easily and melt faster in the spring.

It’s all part of the vicious cycle of Arctic climate change. Within just a few decades, scientists predict the Arctic could be seeing totally ice-free summers.

"We are seeing these extreme events within the Arctic, and we’re seeing the impacts of climate change already occurring," Labe said. "And I think we should focus on that probably more than ranking statistics as we sometimes tend to do."