Fires rise in Arctic as ‘lightning follows the warming’ 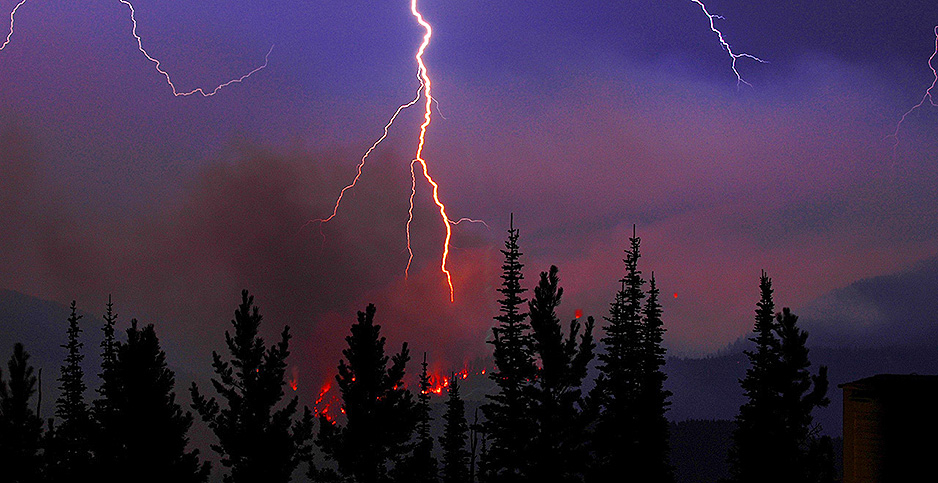 Climate change is driving lightning and wildfires farther north, according to new research. Government of Alberta

Climate change is driving up the number of forest fires ignited by lightning, and it’s pushing them farther north, to the edges of the Arctic tundra, researchers say.

Lightning-caused fires have risen 2 to 5 percent a year for the last four decades, according to a paper published yesterday in the journal Nature Climate Change. And as thunderstorms intensify and become more frequent, fires are increasingly occurring in the boreal forests, and even on the permafrost tundra. Warmer temperatures encourage more thunderstorms, which in turn bring more lightning and greater fire risk.

The changes are part of a complex climate feedback loop that is only now becoming more clear to scientists, said Sander Veraverbeke of Vrije Universiteit Amsterdam, the study’s lead author. A feedback loop is a series of interrelated phenomena that is worsened by climate change and continues to build upon itself with additional consequences. In the north, fires release more carbon dioxide and methane from the permafrost, he said.

"You have more fires; they creep farther north; they burn in these soils which have a lot of C02 and methane that can be exposed directly at the moment of the fire and then decades after," Veraverbeke said. "That contributes again to global warming; you have again more fire."

Scientists studied a spike in fires caused by lightning strikes in the Canadian Northwest Territories in 2014 and in Alaska in 2015. Because there is so little human activity in both of those regions, researchers traced the fires in remote areas to lightning strikes.

Scientists have previously connected climate change to an increase in lightning. For every degree Celsius of warming, lightning strikes are estimated to increase 12 percent, according to research published in the journal Science in 2014. Based on projected warming, that could mean a 50 percent increase by the end of the century. There are currently about 20 million lightning strikes over the continental United States, and about half of all wildfires are now traced to lightning strikes.

Researchers have connected increased drought conditions and increased extreme weather to more wildfires, but most of the earlier studies have focused on the lower United States. The research published yesterday is the first to document the feedback loop of forest fires and lightning strikes in the Arctic.

"We will keep having more lightning in these northern areas, so it will keep happening more and more," Veraverbeke said. "The frequency of these fires in tundra regions will likely increase, and that has obviously implications for the release of more carbon because those are areas where the fires burns in permafrost soil, so it could release quite a bit, not just the year of the fire but decades after the fire."

When permafrost burns, layers of organic material that store carbon are consumed, said James Randerson of the University of California, Irvine, a co-author of the paper. That causes additional emissions to be released for years into the future.

The soil composition is also altered. Fire can help trees grow by removing a layer of organic matter that makes it difficult for saplings to take root. That exposes mineral soil underneath, in which trees survive. Thus, more fires could lead to greater tree growth in the north, which produces more fuel for future fires, Randerson said. Some of these additional trees could also stick out above the snow line and absorb the sun’s rays, encouraging more melting.

"It’s a type of feedback that people didn’t necessarily appreciate, and it shows a vulnerability to the tundra, the potential for fires to move into this biome," Randerson said.

The study highlights a series of troubling uncertainties that warrant further research, he added. The feedback loop could worsen significantly in the future if tree cover spreads northward. Lightning strikes near trees, so increased cover could bring more lightning, and more fuel for fire.

"This study suggests we need to do more work to understand what the implications might be of a lightning-rich Arctic," Randerson said. "We knew there was going to be a lot of warming, but it seems that from year to year and spatially, the lightning follows the warming."