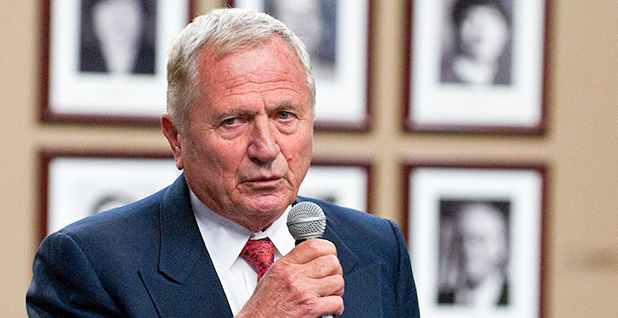 Jim Tozzi, head of the Center for Regulatory Effectiveness, is known for helping to create the Office of Information and Regulatory Affairs. Administrative Conference of the United States

A Washington fixture who for decades has worked to increase scrutiny surrounding federal regulations and the studies behind them is opposing EPA Administrator Scott Pruitt’s "secret science" proposal.

Jim Tozzi, who created the Office of Information and Regulatory Affairs during the Carter administration and now heads the Center for Regulatory Effectiveness, says the EPA chief may be acting with too much haste.

The proposed rule, which has already sparked considerable controversy, would effectively bar EPA from using scientific research in crafting new regulations unless the underlying data are made public (Greenwire, April 27).

Some observers would see Tozzi as a natural ally of the plan, having worked to increase transparency in rulemaking — to the point where critics accuse him of jeopardizing human health and the environment.

He added, "If there’s some void that has not been addressed, then you should propose some new regulation or guidance. They sort of skipped those steps."

Tozzi is the author of the Data Quality Act, which left-leaning activists have criticized as a vehicle for industry to challenge regulations on the grounds of not meeting information quality requirements.

Passed as a two-sentence rider in a 2001 spending bill, the act requires the White House Office of Management and Budget to ensure that federal agencies are maximizing the "quality, objectivity, utility and integrity of information."

More recently, Republicans and moderate Democrats have looked to strengthen the law, and Tozzi has been a supporter of some of those efforts.

James Goodwin, a senior policy analyst with the Center for Progressive Reform, said he was surprised to learn of Tozzi’s position against one of Pruitt’s top priorities.

"Both the Data Quality Act and the EPA anti-science measure are intended to block regulations," Goodwin said. "If I were a hardcore anti-regulatory person, I would certainly want both these things in place. So to that extent, his perspective is interesting."

EPA this week launched a 30-day public comment period on the "secret science" proposal (Greenwire, April 30). In a letter, the Union of Concerned Scientists asked Pruitt to lengthen the comment period to at least 90 days, given the proposal’s "complexity" and its potential consequences.

They cite a 2010 study that found exposure to formaldehyde was linked to leukemia. The paper’s authors kept the data private, citing health confidentiality concerns (Climatewire, May 1).

But Angela Logomasini, a senior fellow at the Competitive Enterprise Institute, wrote an op-ed in The Hill in recent days arguing that secret data can be manipulated.

"Sound scientific research should be designed so that data can be made available — with the approval of the subjects — without releasing individual identities," she wrote. "But today, many researchers apparently would rather not release data, making it difficult for others to challenge their results."

The left also points to a 2013 book by three professors — R. Kenneth Godwin, Erik Godwin and Scott Ainsworth — that raised concerns about the Data Quality Act.

In "Lobbying and Policymaking: The Public Pursuit of Private Interests," the professors said the act served as a vehicle for industry to attack EPA’s review of atrazine, the most widely used herbicide in the United States.

Syngenta AG, the maker of atrazine, fought the studies by founding a special-interest group called the Triazine Network, the book says.

"The Triazine Network hired Dr. Jim Tozzi to find a way to keep atrazine on the market. Not surprisingly, Tozzi used the DQA to challenge the studies that revealed that atrazine might pose a threat to human health," said the book.

"In 2012, however, the EPA had not yet completed all of the studies necessary to meet the requirements of the DQA, and atrazine remained on the market. The DQA had bought Syngenta a decade of atrazine profits."

Yogin Kothari, Washington representative with the Union of Concerned Scientists’ Center for Science and Democracy, said about the act, "It’s really designed to find ways to poke holes in evidence."

Tozzi has fiercely disputed such characterizations of the law he helped write and defends it as having bipartisan applications.

"In recent years, some of the biggest users of the Data Quality Act have been NGOs and public interest organizations," he said, referring to a blog post on the subject.

"In terms of this herbicide issue, EPA said it was an endocrine disrupter," he added. "But when EPA really looked at all the data, the data doesn’t support it. That was right."