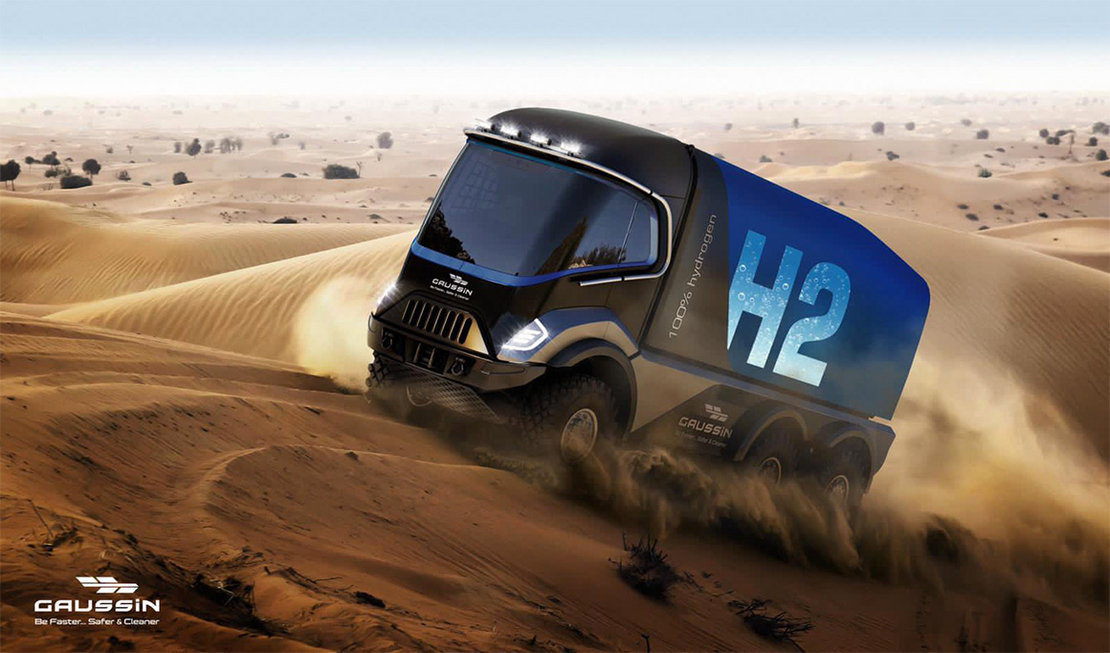 A hydrogen racing truck made by Gaussin is participating in the Dakar Rally, a desert race located this year in Saudi Arabia. @GaussinChristo1/Twitter

The first hydrogen-powered truck to take part in the legendary Dakar Rally set off Saturday from the Saudi Arabian city of Jeddah on the first leg of this year’s more-than-4,000-mile off-road race.

Produced by the French automotive startup Gaussin SA and sponsored by the state-owned oil company Saudi Aramco, the H2 Racing Truck ran the first 12-mile stage of the race as a demonstration vehicle. Gaussin also plans to install a temporary hydrogen-powered tent at the end of the race.

Founded in 2010 and now valued at more than $190 million, Gaussin hopes its involvement in the world’s most popular rally will shine a global spotlight on the potential for fuel cells, which produce no planet-warming emissions when they run on hydrogen derived from clean energy.

"We are above all there in this first year to collect databases, with our partners, so that ultimately the entire industry can benefit — so that fuel cells can get even better," Christophe Gaussin, the startup’s CEO, said yesterday in a video from Jeddah.

The H2 has two 300-kilowatt electric motors, which are powered by a combination of hydrogen fuel cells and batteries, the company said. The truck can hold 80 kilograms of hydrogen, can travel up to 155 miles in race conditions and takes 20 minutes to recharge.

Originally staged on a course stretching from Paris to the capital of Senegal, the Dakar Rally now traverses the dunes and mountains of the Saudi kingdom. The grueling 14-day competition was televised in 190 countries last year, reaching around 1 billion viewers, according to organizers.

This year’s car competition also includes the first all-electric entrant. But reigning Dakar Rally champion Stéphane Peterhansel, driving a souped-up Audi RS Q e-tron, is effectively out of the contest after the Frenchman broke his car’s rear axle yesterday during the second stage.

Gaussin’s participation in the Dakar Rally effectively marks its entrance into the bigger and more consequential race to decarbonize trucking. Other competitors include European incumbents Daimler and Volvo and newer companies like electric bus maker BYD of China and Nikola Motor Co., which is based in Phoenix and is also pursuing a hydrogen fuel cell model.

Hydrogen fuel cells are currently lighter than batteries, making them an appealing option for long-haulers. But most truck producers have focused on making battery-powered rigs "because of the need for extensive infrastructure to produce and distribute hydrogen," said Samantha Gross, an energy and climate expert at the Brookings Institution, in a 2020 paper on decarbonizing heavy transport.