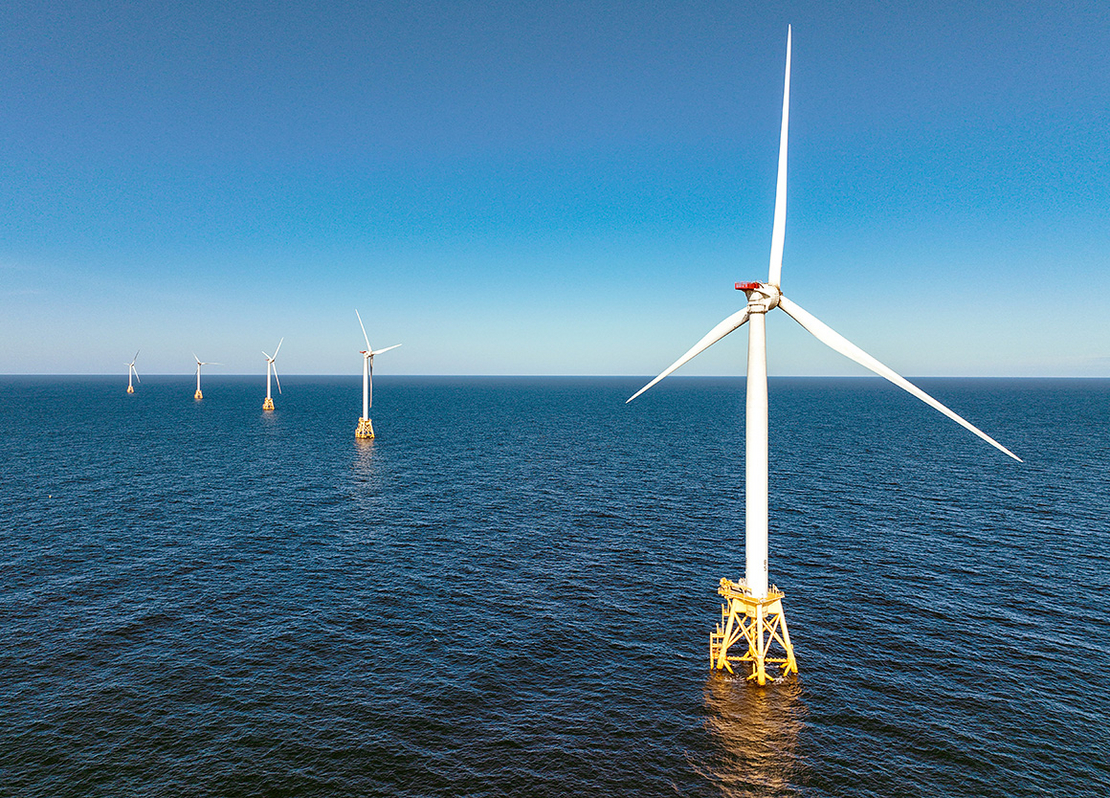 New York deepened its commitments to offshore wind yesterday, announcing it would buy power from a large suite of projects while adding requirements for transmission that could set a national precedent.

Democratic Gov. Kathy Hochul said in a statement that New York has begun soliciting project proposals from developers to build at least 2,000 megawatts of offshore wind — enough for about 1.5 million homes.

The state could also aim higher and contract as much as 4,600 MW, a level that could bring New York close to achieving a key climate mandate, when combined with the existing 4,300-MW project pipeline. Under state law, at least 9 gigawatts of offshore wind must be online by 2035, as part of a fully carbon-free grid envisioned for 2040.

“Today we are putting words into action and making it clear that New York State is the national hub of the offshore wind industry,” said Hochul in a statement that included support from national and local environmental groups, building trade unions and state lawmakers.

Yet the New York development is also exposing a critical challenge for offshore wind: how to connect a large number of turbines at sea to often-limited grid connection points, while dividing the cost burdens equally.

“While all states with OSW targets have acknowledged the issue with transmission, both establishing connections offshore and upgrading the infrastructure onshore, there seems to be a lot more talking about it and a lot less activity around it,” Samantha Woodworth, a senior research analyst for North American wind at Wood Mackenzie, wrote in an email.

The New York news arrived days after California ratcheted up its own offshore wind goals despite not having a single approved project in its coastal waters. Gov. Gavin Newsom (D) recently asked regulators to set a 20-gigawatt target for 2045 as part of their larger climate planning (Energywire, July 26).

“This essentially will mean that New York will achieve its 2035 target early and creates the scope and scale that’s really necessary to build a domestic supply chain and industry here in the U.S.,” said Fred Zalcman, director of the New York Offshore Wind Alliance. “So it’s really a major development in the offshore wind space.”

“I think that with this solicitation, they recognize that we could quickly eclipse that [9-GW] goal,” he added.

According to a draft scoping plan issued last year by the state’s Climate Action Council, offshore wind could end up providing 20 GW by 2050 if New York is to achieve its goal of economywide decarbonization by that date. The council was established to guide implementation of New York’s 2019 climate law.

Getting to 20 GW is likely to require the federal government to lease off additional swaths of ocean.

The Biden administration’s recent $4 billion lease auction in the New York Bight should provide New York and its neighboring states room for a maximum of roughly 7 GW (Energywire, May 9).

The 20 GW threshold might also require energy to come from floating turbines operating in deeper waters — something regulatory staff in New York are beginning to investigate. That technology has only recently emerged at commercial scale and would likely be much more expensive, but can harness winds in deepwater swaths of the ocean out of sight from shore.

“It’s hard to say that we’ve fully exhausted the potential for closer shore development, but certainly as we ratchet up the targets, floating will increasingly come into the picture,” said Zalcman.

But Hochul’s announcement also cracks open a broader suite of questions about how turbines in the water will connect to the onshore grid — something that grid experts have described as one of the thorniest and most persistent problems facing the future of offshore wind.

Under New York’s plan, any turbine project that connects to shore using high-voltage cables must also be “mesh ready,” meaning it would eventually be able to plug into a shared, multiproject network of ocean-floor transmission cables, under the terms of the solicitation.

That requirement is the first of its kind for any state. Although New York has stopped just short of mandating construction of a full “meshed” network, it sends an unmistakeable signal that the state is headed in that direction, said analysts.

The East Coast’s shorelines have relatively few places where the grid can safely absorb the huge volumes of electricity to be generated at sea, he noted. As more turbines find their way online, it could become pricier, slower and more complicated for each successive project to send its power into the grid.

“There are limited readily available points of interconnection,” said Fox. State clean energy targets might very well rely on resolving that problem, he added. “It obviously makes sense to plan ahead.”

But New York’s latest grid requirement for wind developers raises several new questions: What kind of requirements will developers have to implement in preparation for a future network, and at what cost to the public? If the mesh network ends up including offshore turbines in other states, how are the expenses distributed?

Elsewhere in the Northeast, plans to build shared networks for offshore wind are stirring dissent. After the Federal Energy Regulatory Commission approved a cost-sharing framework in New Jersey, ratepayer advocates in Ohio criticized it, along with major investor-owned utilities, who fretted about whether it would force unwilling parties to pay for offshore wind (Energywire, April 19).

New York’s regulatory staff and energy officials are currently investigating where transmission cables could be most easily laid at sea, as part of a meshed grid. Grid operators with ISO New England have also begun to make preparations for a shared offshore transmission system.

But Woodworth, the Wood Mackenzie analyst, noted the “notoriously slow” pace of most transmission development.

“With the nation’s first OSW projects expected online in the next 2 years, that’s a very short time to approve and execute transmission upgrades. While strategy is important to make sure it’s done right, there needs to be a little more giddy-up on getting these transmission issues resolved,” wrote Woodworth.

For the latest round of turbine projects in New York, officials at the New York State Energy Research and Development Authority have braided in preferences for developers who repurpose fossil fuel plants and their related infrastructure near New York City, which has struggled more than the rest of the state to decarbonize its grid.

Other preferences go beyond transmission. Developers’ proposals can win extra points for going beyond new minimum content requirements for using made-in-America steel and iron. Companies could also receive up to $300 million in state funds if their projects include plans to build new blade and nacelle manufacturing plants or redevelop ports into staging areas for turbines, according to the solicitation.