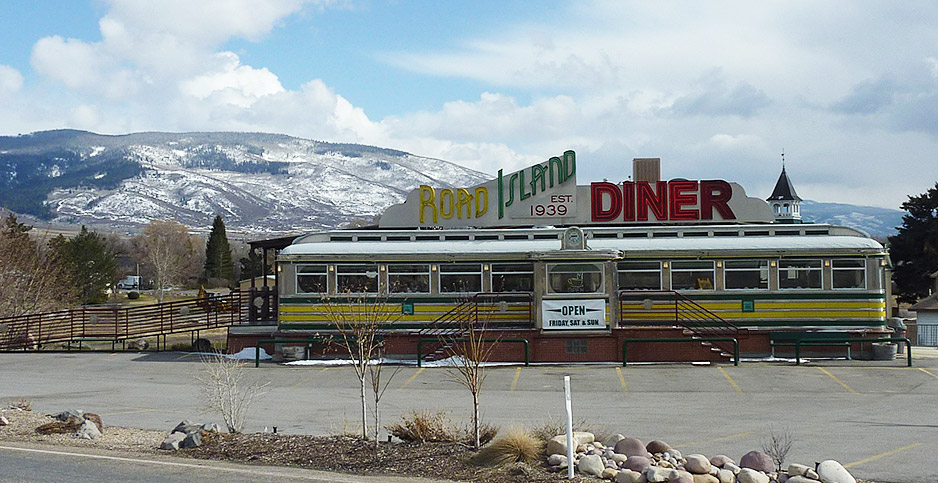 A diner in the town of Oakley, Utah. The city, stricken by drought, has barred any building permits that require a new water connection. Stephanie Rogers/@stephrog/Flickr

"Our first priority is the citizens of our community," said Oakley, Utah, Mayor Wade Woolstenhulme. "We’ve already told them we’d provide them with the water that they need to survive."

Leaders at rural water associations and other water organizations in Utah, Arizona and Colorado said the city of Oakley is likely the first, but not the last, municipality to halt growth in response to current water scarcity driven by a megadrought across the West.

"I think we will be hearing a lot more about moratoriums in the future," Carly Burton of the Utah Water Users Association wrote in an email. "There is only so much water to go around."

A drought is a period of abnormally dry weather that lasts long enough to affect water supplies, farming, ranching and energy production. U.S. Drought Monitor maps show that almost all of Arizona, California, Nevada, New Mexico, North Dakota and Utah are in drought. Drought severity is ranked from moderate to exceptional; large areas of those states are considered severe or exceptional.

‘I think we’re the mavericks’

Oakley, Utah, is a city of about 1,500 people that’s part of the Salt Lake City metropolitan statistical area. The surrounding Summit County is split between severe and extreme drought.

Two springs and a well supply the city’s water; a new well is expected to be complete next year.

The City Council voted unanimously to issue an ordinance last month, saying they wanted to avoid a potential water crisis and prioritize the water uses for the city’s current residents. The ordinance places a six-month moratorium on new building permits that need water supply for connections.

It states that "the city is concerned that the current drought conditions will result in critical water shortages and require further drastic curtailment measures that would be detrimental to the entire city and cause significant public harm."

"I think we’re the mavericks," Woolstenhulme said. "I haven’t heard of anybody else doing it. There are neighboring communities that’ve got a lot of building going on, and I don’t think they have the water to support it all."

Dale Pierson, executive director of the Rural Water Association of Utah, said he hadn’t heard of any other town in Utah looking at pausing development due to drought.

"I would not be surprised if some have to look at it this summer," he said. "We are seeing drought-related water discharges dropping off."

Dry conditions this spring, combined with the reopening of a school with high water demand, made the mayor and City Council nervous. A fire last year almost drained the city’s water supply.

"This is my eighth year of being mayor, and every summer we deal with the tanks being lower than we’d like them to get," Woolstenhulme said. "Our worst-case scenario would be to run out of water or not have enough water in our tank, have a fire break out, and not be able to put it out. That’s a big liability on the city."

"All around us, we’re getting inundated by growth," Woolstenhulme said. "We’re at a point where we don’t want to be in a position where we have more growth than we can maintain."

Ellen Hanak, vice president and director of the water policy center at the Public Policy Institute of California, said water can sometimes be used as a weapon to stop unwanted growth.

"You tend to see the political reaction to drought be one of, ‘Let’s stop new housing in places that don’t like new housing anyway,’" she said.

The moratorium applies to building permit applications that require a new connection to the city’s water system or extending an existing connection. It also bans landscaping that requires city water. Construction already underway will be allowed to continue.

The city is also taking other, more common steps to curb water usage, including restricting outdoor watering to every other day.

Other cities and states around the country have enacted similar temporary bans on lawns that must be watered.

Legislation signed Friday by Gov. Steve Sisolak (D) made Nevada the first in the nation to enact a permanent ban on certain categories of grass (Climatewire, June 8).

"On top of the prayers, we’ve got to do some real work here too," Pierson said.

Although the building permit pause has affected only five applications so far, water associations and experts across the West say the temporary moratorium is a sign of what might be to come.

"What you see in California is communities where there’s been a lot of restriction on housing related to water supply," Hanak said.

She noted small communities near the city of Monterey that require permits to put in a new bathroom and described the coastal community of Bolinas as "a place where it’s a big deal to acquire a water meter in order to build."

Smaller, more rural areas, Hanak said, tend to have more isolated water supplies and be more apt to see water shortages. A water board in Marin County announced recently it may be considering a moratorium on new construction.

But Burton said he hasn’t heard anything about other places in Utah issuing moratoriums on building permits.

He said it’s more common to require builders, developers or homeowners to acquire a share of water from a local irrigation company and then relinquish that share to the local municipality or entity that is the water provider for that house.

"I have not heard of anything similar happening in Colorado," Beth Albrecht, president of Colorado’s American Water Resources Association (AWRA) and a water resources engineer, wrote in an email. "The scarcity of water is becoming a hot issue, especially with the drought forecast on the Western Slope."

AWRA colleague Lisa Brown said some municipalities in the state require developers to "bring water to the table" as part of their new developments.

The city of Greeley, Colo., for example, requires developers to pay for raw water supplies for their new developments, which are then used by the city to provide drinking water to new residents.

"I believe these policies are intended to prevent the type of ‘pause’ that Oakley, Utah is imposing," Brown wrote in an email.

"While the drought in the West is concerning, our cities are continually planning to ensure they have reliable water supply and maintain responsible growth bringing long-term sustainability," Trapp wrote in an email. "Due to that long-term planning, there is no discussion about pausing development here in the Phoenix Metro area."

Deianeir Hartman, technical resource coordinator for the Rural Water Association of Arizona, wrote in an email that some towns are feeling the crunch. The town of Mayer, Ariz., is under a meter moratorium. Summer’s water demand exceeds its capacity, but some building is still occurring, and wells have run dry in the county for years.

In Arizona, cities have to demonstrate they have a 100-year assured water supply. But a new report conducted by researchers at Arizona State University warns that groundwater is over-allocated in the state.

"Our analysis shows that Arizona continues on a path of unsustainable groundwater use that threatens the health and welfare of our state," senior research fellow Kathleen Ferris writes in the report. "It is not too late for a course correction, but that will require that Arizonans face the truth and make bold choices."

But Hanak believes there’s hope in the thirsty West. Per capita water use, she said, can often be lowered in ways that make new housing possible. And communication during planning processes can make sure housing doesn’t get built where there’s no water.

"The big concern in lots of parts of the West around water supply and housing has been about just making sure there’s coordination between water and land use planning," she said. "In most situations, it’s possible to make this all work. … What worries me more is places where there isn’t any oversight and stuff gets built in places where there isn’t a good water supply, and their well goes dry."