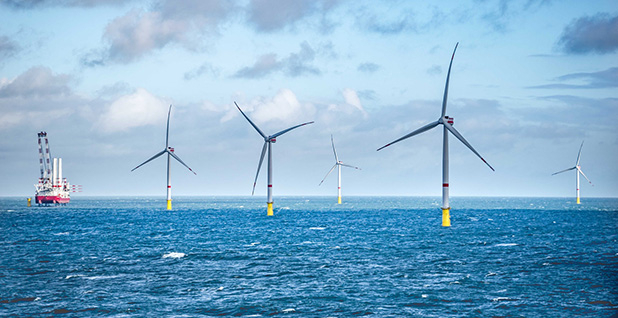 Vineyard Wind will temporarily withdraw its application for federal approval to erect the first large offshore wind farm in the country, in an apparent attempt to pause the Trump administration’s review of the project days before it was scheduled to publish a final analysis.

The pause, which could last several weeks, makes it unclear if a final decision on Vineyard will come from the Trump administration or that of President-elect Joe Biden, who takes office Jan. 20.

Trump’s Interior Department has expressed trepidation about the project, delaying a decision on it last summer in order to conduct a cumulative impact study (Energywire, June 10). The incoming Biden administration, which is looking for ways to reduce greenhouse gas emissions and create jobs amid an economy-crushing pandemic, is expected to take a more favorable view.

Vineyard has proposed an 800-megawatt wind installation off the coast of Martha’s Vineyard, Mass., that would be the first offshore wind farm of scale in the United States.

It’s unclear how Vineyard’s move will affect the permitting timeline. A final environmental impact statement was scheduled to be released on Dec. 11. A record of decision was slated to follow on Jan. 15 — five days before Biden’s inauguration. Those two decisions are critical final steps before construction can begin on the project.

In a statement, Vineyard said it was temporarily withdrawing its construction and operation plans in order to conduct a technical review of a larger turbine. The company said yesterday it had selected the Haliade-X turbine manufactured by GE Renewable Energy, which would enable it to reduce the number of towers in the development’s first phase from 84 to 62. The Haliade-X has a generating capacity of 12 or 13 MW. Vineyard had previously planned on using 9.5-MW turbines from Danish manufacturer MHI Vestas Offshore Wind.

The company reported that it continues to plan for a financial close on the project in the second half of 2021 and to begin power production in 2023.

"While the decision to pause the ongoing process was difficult, taking this step now avoids potentially more federal delays and we are convinced it will provide the shortest overall timeline for delivering the project as planned," Vineyard CEO Lars Pedersen said in a statement. "We intend to restart the [Bureau of Ocean Energy Management] process from where we left off as soon as we complete the final review."

The announcement also drew attention from Sen. Elizabeth Warren (D-Mass.), who has criticized the Trump administration for delaying Vineyard.

Companies cannot pause and restart federal environmental reviews, but agencies can agree to do so if they think more study is needed or a change amounts to a significant alteration in a proposal, he said.

The switch to fewer turbines appeared to be more of a tweak than a fundamental shift in the project, and one that is likely to reduce the development’s environmental impact, Parenteau added. In such cases, companies will frequently inform federal regulators of the change and ask that they include it as one of the mitigation conditions in a final permit.

"I’ve got to think the applicant got some type of signal they didn’t like," he said. "It raises questions in my mind about why they are taking this course of action for a modification that is an improvement."

Former Interior Secretary Ryan Zinke was a strong advocate of the sector’s growth as part of the Trump administration’s energy dominance agenda. But his replacement, David Bernhardt, has proved more reluctant. Bernhardt paused the release of Vineyard’s final environmental review last year and ordered a more robust analysis of the cumulative effects of the potential offshore wind industry on the ocean environment and the fishing industries.

Bernhardt told local reporters and fishermen in Boston earlier this year that he was eager for offshore wind, as long as it wasn’t put in the wrong place — echoing fishermen’s concerns about siting turbines in fishing grounds (Greenwire, July 22).

"We are going to be thoughtful," he said at the time. "We don’t whack people with an unnecessary burden."

The federal permitting pace that has troubled Vineyard has also slowed other offshore wind projects, including Ørsted A/S’s Skipjack project off the coast of Delaware.