FirstEnergy CEO on corruption scandal: It wasn’t me 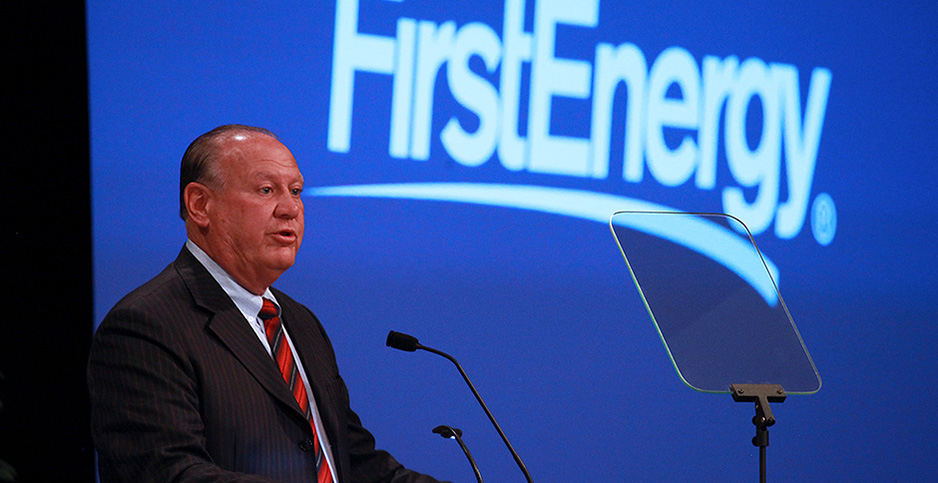 FirstEnergy Corp. CEO Charles Jones oversees the electric utility that was linked to a bribery scheme to subsidize its coal and nuclear plants. He is denying personal involvement. FirstEnergy

FirstEnergy Corp. CEO Charles Jones vehemently denied any involvement in the sweeping corruption scandal that has ensnared the Ohio House speaker, declaring in an earnings call with financial analysts today: "The CEO referenced in some of that affidavit wasn’t me."

The remarks were Jones’ first public comments and came as a criminal complaint filed by federal investigators appeared to identify the FirstEnergy CEO as playing an active role in the promotion and defense of a law that provided $1.5 billion in subsidies to a pair of nuclear plants once owned by the company. The complaint quotes a long public statement made by an unnamed CEO. Jones made the same statement verbatim during the same period and in the same setting identified by investigators (Climatewire, July 22).

Peppered with questions from financial analysts about the investigation, Jones denied any personal knowledge surrounding the alleged actions of Ohio House Speaker Larry Householder and the dark money group he is said to have controlled.

Householder and four associates were arrested on racketeering charges Tuesday. The allegations state that Householder used the money to build his political power, pass a bailout benefiting FirstEnergy’s plants and then defend it from a ballot measure.

Jones acknowledged that 25% of the $60 million paid to Generation Now, Householder’s dark money group, came from FirstEnergy. The FirstEnergy CEO effectively sought to shift the blame to FirstEnergy Solutions, the subsidiary that operated the company’s power plants until last year.

When one analyst asked whether Jones had any control over political payments made by FirstEnergy Solutions to Generation Now, the utility boss responded, "As of November 2016, when we essentially made the competitive generation business non-core, FES separated fiduciarily, financially and operationally from being a part of FirstEnergy."

He added: "I’ve had no input into any of the decisions they’ve made. Obviously, we’ve had a lot of discussions between the two companies as it relates to transition, shared services and so forth. But in terms of decisionmaking authority, mine ended in November of 2016."

FirstEnergy for years has moved to distance itself from its affiliate, as low wholesale power prices battered the nuclear and coal plants operated by FirstEnergy Solutions. The subsidiary filed for bankruptcy in 2018 and emerged as a separate company known as Energy Harbor Corp. this year.

Another analyst asked Jones what gave him the confidence to state FirstEnergy had acted properly in relation to H.B. 6, the legislation that provided funding to the two nuclear plants and a pair of coal plants in which the company maintained a stake.

"The financial support we provided to House Bill 6 isn’t complicated," the CEO replied. "We know what we did. We know why we did it. We’re looking forward to sharing that with the Department of Justice. That’s what gives me the confidence to be able to say that we acted properly."

Jones asserted the shared services between the parent and subsidiary largely included operations like human relations and did not include external affairs like lobbying. That seemed to contradict bankruptcy documents reviewed by the Energy and Policy Institute, a utility watchdog that supports clean energy. An Energy Harbor filing describing the arrangement specifically said shared services included external affairs, the institute reported.

At another point, an analyst asked Jones if he had any plans on stepping down. The company has reshuffled some of its executive team in the months leading up to the scandal breaking.

"I think I’ve said that I have made no definitive retirement plans, and it certainly won’t be this year," Jones said. "And I absolutely am not going to, you know, I’m not going to not do my part to help restore the reputation of this company to what it duly deserves."