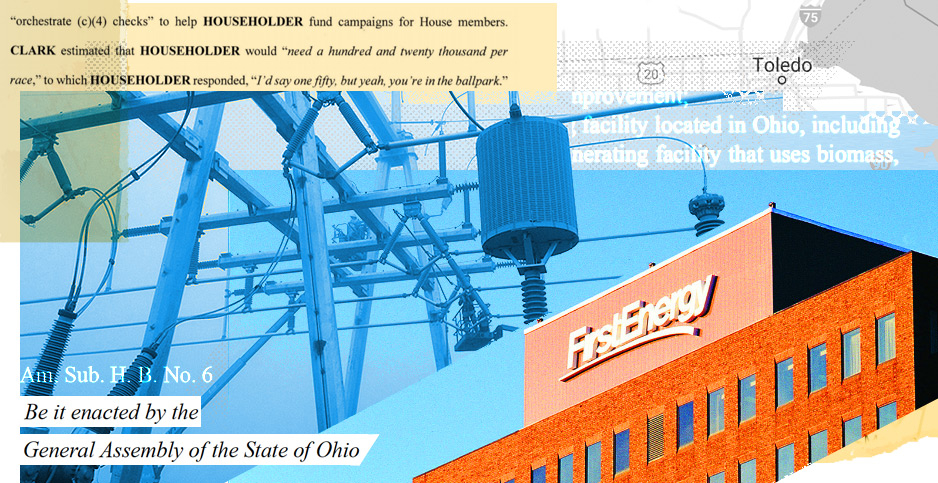 Bribery, racketeering and money laundering are some of the sensational claims shining a national spotlight on a controversial energy bill passed in Ohio last year.

But a seemingly innocuous provision of H.B. 6 is emerging as a focal point of legislative repeal efforts — language allowing for electric utility "decoupling," a decades-old policy tool aimed at removing the incentive for utilities to sell more electricity.

Environmental groups embrace decoupling as a way to get utilities to agree to energy efficiency programs. But critics in Ohio contend that the H.B. 6 decoupling provision is yet another subsidy that all but guarantees hundreds of millions of dollars in additional revenue for FirstEnergy Corp., the utility holding company at the center of an ongoing political scandal around the bill’s passage.

Consumer advocates argue the law is slanted in FirstEnergy’s favor by allowing the utility to collect the same amount of revenue it did in 2018, when at least two large northern Ohio cities served by the utility, Akron and Toledo, experienced their hottest summer on record.

"They set this number at a peak year, so they always win," said John Seryak, a consultant who analyzed the decoupling policy for the Ohio Manufacturers’ Association. "The game is heavily skewed."

Seryak’s analysis, which uses data from FirstEnergy’s own demand forecasts filed with state regulators, estimates the H.B. 6 provision could yield the company $355 million in "unearned revenue" through 2024. And a separate ruling by state regulators allows the company to extend its use through 2030, potentially reeling in another $400 million for energy it doesn’t sell.

The bulk of that total is expected to come from so-called lost revenue — money that utilities collect to make up for lost electricity sales under some energy efficiency programs. In the case of FirstEnergy, it’s positioned to recover $66 million annually starting next year to compensate for lost energy sales in 2018.

"FirstEnergy is having its cake and eating it too," Seryak said.

What’s more, another provision tucked into the state budget bill passed by the Legislature last summer helps protect "significantly excessive" profits earned by FirstEnergy from being subject to refunds to customers. Consumer advocates have warned that this could cement the company’s gains under H.B. 6’s decoupling policy.

Company spokesperson Mark Durbin couldn’t confirm whether FirstEnergy had a role in drafting the section of H.B. 6 and said he was limited in what he could say about the company’s involvement with the bill, given ongoing investigations and lawsuits.

Durbin said residential customers, spending more time at home during the coronavirus pandemic, could benefit from decoupling because of higher electricity use. Each year, FirstEnergy charges or credits customers for the difference between actual revenues and 2018 levels, he said.

Durbin added that it is appropriate for the utility to recover lost revenues from a prior year because consumer energy savings don’t stop when efficiency programs do. Customers who replace an incandescent lightbulb won’t switch back to inefficient lighting when the LED bulb burns out.

"Those decreases in usage carry over from year to year to year," he said. "Those lower levels of usage, of demand, are not going to jump back up again."

FirstEnergy CEO Chuck Jones touted the benefits of the H.B. 6 decoupling provision differently last fall, when he told analysts it makes a third of the company "somewhat recession-proof" by fixing base revenues.

That comment, made before this year’s steep economic downturn, has resonated with some Ohio legislators seeking to undo the 2019 energy law, which they say is tainted by scandal.

In a federal affidavit unsealed this summer, federal prosecutors allege that an Ohio company, identified as Company A, poured $61 million into a dark money campaign run by former Republican House Speaker Larry Householder, all for the purpose of passing H.B. 6 (Energywire, July 22).

The bill included $150 million a year in nuclear subsidies for Ohio’s two nuclear plants, then owned by a unit of FirstEnergy that was in the midst of Chapter 11 restructuring and in the process of being spun off. That former subsidiary has since been rebranded as Energy Harbor.

While Jones publicly backed H.B. 6, calling it good public policy, he has continued to distance the company from Energy Harbor, which he said has been run by an independent management team and board since 2016, when FirstEnergy decided to exit the competitive generation business.

It’s yet unclear how FirstEnergy may have benefited from the nuclear aid in H.B. 6, if at all. Federal law enforcement officials are continuing their investigation and have subpoenaed records from the utility related to the bill’s passage.

Two environmental groups — the Environmental Policy & Law Center and Ohio Environmental Council — asked the Public Utilities Commission of Ohio (PUCO) this week to investigate how FirstEnergy was involved with H.B. 6 and whether the parent company took a position to support Energy Harbor.

At least some state lawmakers, however, say the decoupling provision in the bill helps explain the $61 million that FirstEnergy gave Householder’s dark money group, Generation Now.

"Wouldn’t it be fair to characterize the $355 million subsidy, the decoupling subsidy, as the smoking gun?" state Rep. David Leland, the ranking Democrat on the Ohio House committee considering repeal legislation, asked during a hearing last week.

Neither FirstEnergy nor any of its employees have been criminally charged or accused of any wrongdoing by law enforcement. In fact, the company hasn’t been officially identified as "Company A" in the federal affidavit outlining the case against Householder and four associates.

While much is still unclear about FirstEnergy’s links with Householder and Generation Now, observers say there’s little doubt about whom the decoupling provision in H.B. 6 was intended to benefit.

One company filed with regulators to implement the provision on the first day allowed, and so far, just one company has been approved to use it: FirstEnergy.

Decoupling has been around since the 1980s to help utilities overcome the incentive to sell more energy. The regulatory tool is used in more than two dozen states and works by separating, or decoupling, utility revenues from energy sales volumes, eliminating a barrier for companies to offer energy efficiency programs.

Martin Kushler, a senior fellow with the American Council for an Energy-Efficient Economy, has studied utility energy efficiency policies for three decades. He testified in the Ohio General Assembly in 2008, when lawmakers passed the state’s energy efficiency standard — the policy effectively undone in H.B. 6.

Kushler said policies like utility decoupling and so-called shared savings, where utilities and consumers split the financial benefit of lower energy use, are aimed at getting utilities on board with energy efficiency programs, not substitutes for them.

"Things like decoupling and shared savings help the medicine go down," he said. "This is really a perversion of decoupling."

Even the chairman of PUCO, Sam Randazzo, conceded during hearings earlier this month that the decoupling provision in H.B. 6 "is different than PUCO likely would have approved."

In reviewing FirstEnergy’s decoupling mechanism, PUCO staff recommended using weather-adjusted data. But the commission denied the recommendation, noting that it’s a "creature of the General Assembly" and that prescriptive language in H.B. 6 didn’t allow the commission to deviate.

FirstEnergy, meanwhile, said the proposal filed with state regulators was clear and transparent, and other parties had an opportunity to review it and comment.

"It is very upfront and open," Durbin said. "That’s what being a public utility is all about."