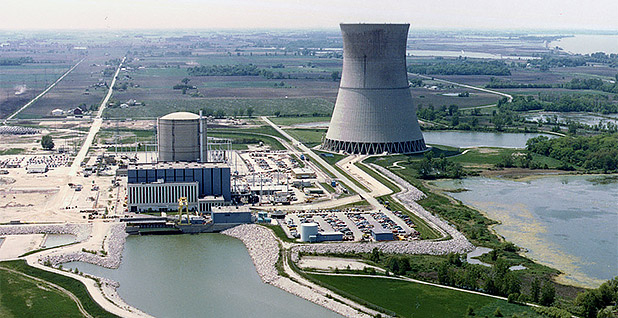 The soon-to-be-filed Ohio legislation follows approval of similar plans in New York and Illinois. Connecticut’s Legislature is also weighing a bill to aid Dominion’s Millstone nuclear power plant, and similar measures are expected to be proposed in Pennsylvania and New Jersey.

"We believe legislation would not only preserve zero-emission assets but jobs, economic growth, fuel diversity, price stability and reliability, and grid security for the region," Chuck Jones, FirstEnergy’s CEO, said on the company’s fourth-quarter earnings call.

But the zero-emission nuclear legislation to be filed in Ohio isn’t meant as a bridge to help FirstEnergy run the reactors for the duration of their operating licenses. It’s meant to pave the way for the sale of the plants.

Jones told analysts he has lobbied personally for nuclear legislation and been candid with lawmakers about the company’s intentions to sell the reactors.

"I’ve been very upfront with the legislators that I have met with personally to tell them, ‘Don’t do this for FirstEnergy because it’s unlikely we’re going to be the long-term owners-operators of these assets,’" he said.

"Absent something to raise the value of these units and make them attractive to a buyer, there’s only one way for us to exit this business," he said.

FirstEnergy’s push to win nuclear subsidies for its Davis-Besse and Perry plants is part of the company’s broader strategy to exit the competitive generation business entirely by mid-2018 (Energywire, Nov. 7, 2016).

"Running nuclear reactors isn’t something that just anyone can do. There is a significant amount of capital risk associated with that business," Jones said. "I’m not sure if people are going to take on the risk of even the next refueling outage, which is very expensive."

The nuclear industry’s elevator pitch is this: Nuclear reactors represent the only baseload source of carbon-free energy, and prematurely closing the plants would not only mean a loss of jobs and taxes, but the energy they produce would be replaced mostly with dirtier coal and natural gas.

In Ohio, the chairman of the House Utilities Committee, William Seitz (R), has already pledged to again push legislation that would pull the plug on Ohio’s renewable and efficiency standards. The Legislature in December passed S.B. 554 to make the standards voluntary for the next two years, but Gov. John Kasich (R) vetoed it (Energywire, Dec. 9, 2016).

Even if FirstEnergy can persuade the Legislature to pass a bill subsidizing the nuclear plants, it’s unclear who would buy them.

While Exelon, the nation’s largest nuclear operator, purchased Entergy Corp.’s FitzPatrick nuclear plant after the New York Public Service Commission approval of the ZEC program, it isn’t clear if the company would have the appetite to add more reactors to its fleet.

"There’s not a tremendous appetite for these things," said Paul Patterson, an analyst at Glenrock Associates LLC who noted that utilities in general have been reducing exposure to merchant generation.

"The ZEC program is a stealth tax on the citizens and businesses of Ohio," Dynegy’s chief executive, Bob Flexon, said in an emailed statement. "It enriches First Energy shareholders at the expense of the state’s competitiveness."