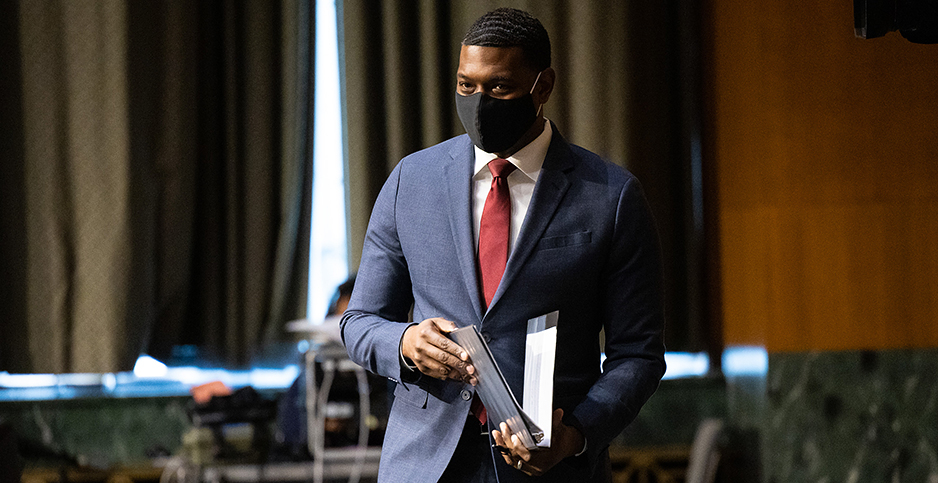 Michael Regan’s confirmation hearing yesterday focused on the challenges ahead for EPA.

In just under three hours, the Senate Environment and Public Works Committee questioned President Biden’s EPA administrator nominee about air, climate and water regulations; his plans to rebuild the agency; and how he will handle complex issues around biofuels and pesticides that have vexed past administrators.

Regan drew upon his experience as secretary of the North Carolina Department of Environmental Quality. He promised collaboration, dialogue and transparency if he is confirmed as EPA administrator.

Republican senators centered their questions not on him but on the White House, especially a series of ambitious executive orders dealing with climate change, and even the Obama administration, where Biden served as vice president (E&E News PM, Feb. 3).

There were few fireworks at the hearing but rather kudos for the nominee, so it’s likely now a question of when, not if, Regan will be confirmed as EPA’s 16th administrator.

Carper did not commit to holding a markup on Regan next week, when the Senate trial for former President Trump’s second impeachment is set to begin.

But he said the cordial tone yesterday, as well as support for Regan from agriculture and environmental groups, could help "expedite" his nomination.

Who’s really in charge at EPA?

Familiar faces have returned to government as part of the Biden administration. Now both as top White House officials, former EPA Administrator Gina McCarthy is leading domestic climate policy while former Secretary of State John Kerry is heading up international climate policy. That has sparked questions from Republicans about whether Regan would report to McCarthy or Kerry.

McCarthy and Kerry, not Regan, frustrated Republicans at yesterday’s hearing.

"They’ve already established themselves as the unconfirmed and unaccountable czars on climate," Capito said. "I am concerned that this is shaping up to be a third Obama administration."

Biden has promised an aggressive whole-of-government approach to fighting climate change. EPA will likely lead the attack, yet how that response shapes up is yet to be seen, including how to deal with the now-scrapped Affordable Clean Energy rule.

Regan parried a question from Capito on the Biden’s administration’s strategy for dealing with a recent federal appellate court’s ruling that struck down the rule. It had been the Trump administration’s replacement for the Obama-era Clean Power Plan, which was intended to cut coal-fired electricity plants’ emissions of greenhouse gases.

The ruling presents a significant opportunity for EPA "to take a clean slate and look at how do we best move forward," he told Capito when asked whether the administration would now resort to a new version of the Clean Power Plan.

"I believe in following the law and following established precedents, and I think that the California waiver exists for a reason," Regan told Sen. Ed Markey (D-Mass.).

The Trump administration’s 2019 decision to revoke that waiver is now embroiled in lawsuits brought by California and environmental groups. On Monday, the Biden administration asked the U.S. Court of Appeals for the District of Columbia Circuit to freeze proceedings in the litigation while it ponders its next move (Climatewire, Feb. 2).

Farm state senators in both parties have tortured EPA over its handling of the renewable fuel standard. The biofuel mandate often pits powerful interests like oil and agriculture against each other.

Sen. Joni Ernst (R-Iowa) pressed Regan on how he would manage biofuels as administrator. Decisions on small refinery exemptions and biofuel petitions are waiting on his desk if he is confirmed, she said. Ernst also pushed for a commitment from Regan for "a strong and growing role" for ethanol.

"Yes, I can commit to the fact that the president has indicated that agriculture will have a seat at the table in this administration, especially as it relates to climate change," Regan said.

"You have my commitment that we will take a look at the RFS program, and we will introduce some transparency into that program," Regan replied. "We will let science lead us, and we will follow the letter of the law as it was intended for that program."

He plans to up EPA’s game on the issue as well.

"Environmental justice is something that is near and dear to my heart," Regan said at yesterday’s hearing.

The nominee said he wanted to bring on an environmental justice adviser to the administrator. In addition, EPA’s civil rights office will be reviewed, and the agency will request more budget funds for the effort.

EPA will "look at a restructuring and reorganization to be sure that our Office of Civil Rights has adequate staff from every media office that is paying attention specifically to environmental injustice," Regan said.

"You all will hear from me frequently that we do need or will need additional resources if we are to commit to solving environmental justice and equity issues," he said.

After Biden tapped Regan to lead EPA in December, representatives for North Carolina Sens. Richard Burr and Thom Tillis didn’t respond to E&E News’ questions about whether they would support their home state nominee.

So it came as a surprise when both Republicans enthusiastically backed Regan at yesterday’s hearing. Burr and Tillis introduced the nominee.

"Michael’s a good man. He’s a good husband. He is a great father. And I look forward to supporting his nomination on the floor," Burr said.

Tillis also offered support for Regan, saying he may disagree with him on environmental policy at times but believes the nominee "will be somebody we can rely on to be fair."

"At the end of day, we have a great, well-qualified nominee before us, and I encourage your support," Tillis said.

Several EPA administrators have been cleared on a voice vote or unanimous consent in the Senate. But the position’s confirmation vote has become increasingly partisan in recent years.

McCarthy’s approval was held up for months until she was confirmed on a 59-40 vote. Her successors in the Trump administration, Scott Pruitt and Andrew Wheeler, had even less support, with 52-46 and 52-47 votes confirming them, respectively.

Regan, coming from a red state with a reputation for working across the aisle, may lower the temperature in the battle over who leads EPA.

And while Republican senators took shots at Biden’s climate agenda at yesterday’s hearing, many had kind words for Regan.

"You’ve been an excellent witness," Capito told him as she adjourned yesterday’s hearing.